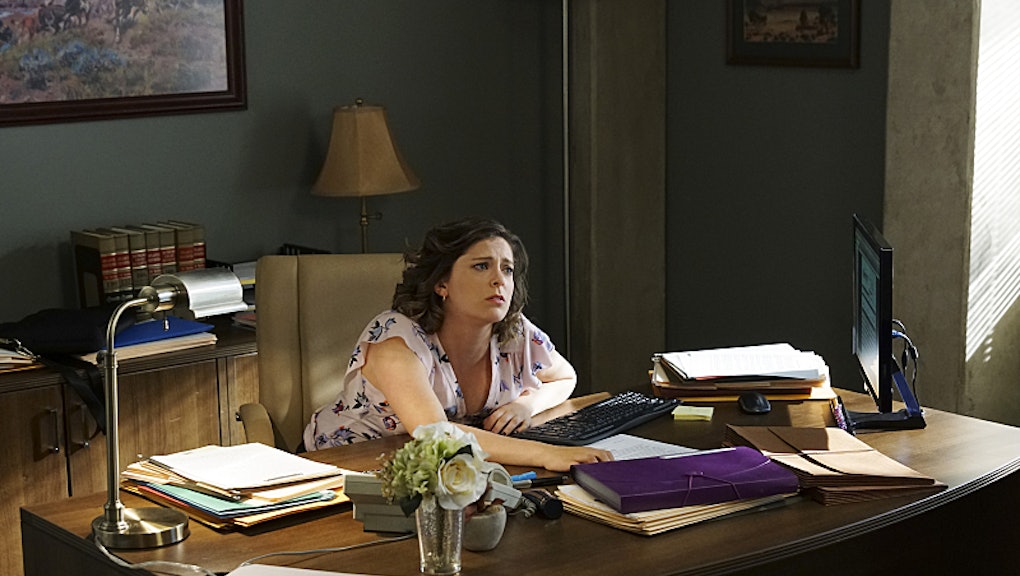 After a lifetime of depression, anxiety, a touch of obsessive-compulsive disorder and suicidal ideation, Rebecca Bunch — the titular character on the CW’s Crazy Ex-Girlfriend, played by co-creator Rachel Bloom — at long last received a proper mental health diagnosis in the show’s third season, which aired its midseason finale Friday. And for this fan, it was equal parts cathartic and heartbreaking.

Why’s that? Because I, like Rebecca, have borderline personality disorder.

In a nutshell, people with BPD have “enormous difficulty regulating their emotions,” according to licensed clinical psychiatrist Dr. Elizabeth Aram. “They may describe feelings of emptiness and struggle with a pervasive pattern of instability in their mood, interpersonal relationships, self-image and behavior patterns,” Aram wrote in an email. “Many individuals with BPD experience intense anger, periods of depression, anxiety, panic attacks, self-harm, eating issues and substance abuse.”

While horrified by her diagnosis at first, mostly due to an ill-advised Google search — “I read two-and-a-half sentences about [BPD] and they were the worst sentences ever,” Rebecca says — we later see her flashing back to various events in her life as her primary therapist, Dr. Akopian (played by Michael Hyatt), reads off the diagnostic criteria for BPD. Realizing she has all nine BPD symptoms (only five are required for a BPD diagnosis) helps her come to terms with the news, even if it doesn’t make her any less afraid of what comes next.

I couldn’t help but cry watching Rebecca experience the same roller coaster of emotions I did upon receiving my own diagnosis in the spring. Like her, I was hopeful, scared, confused — and yet it also felt like a light bulb turned on after years of nothing but darkness. In the blink of an eye, so many things in my life made sense: my impulsive first marriage that ended as quickly as it began; the chronic feelings of loneliness, even in a crowded room; the self-mutilating; the overwhelming feelings of rage over the smallest inconveniences or perceived slights; my addictive tendencies and issues with substance abuse.

Rebecca’s own actions “provide a fairly robust representation of the symptoms and co-occurring tendencies that often accompany BPD,” licensed marriage and family therapist Annie Wright said in an email interview.

“Throughout three seasons, Rebecca has demonstrated unsafe sexual behaviors, financial recklessness, irresponsibility with substances (such as alcohol), intense and frequently changing moods, a pattern of unstable relationships, a history of an eating disorder and even suicidality,” Wright said. “However, how Rebecca demonstrates these symptoms and moments are often glossed over with comedy and/or inserted via one-liners and not necessarily dealt with in a way that may help viewers understand the gravity of them.”

As someone who values humor, even in the most dire of circumstances, I appreciate the way Crazy Ex-Girlfriend is trying to address the seriousness of BPD without losing the whimsy that made me fall in love with the show in the first place. I also find comfort in seeing Rebecca’s eclectic group of pals rally around her in the wake of her suicide attempt and hospitalization — as Aram explained, that’s not always the case.

That said, the normalcy with which the show treats Rebecca’s diagnosis and the difficult road in front of her is balanced with its awareness of the stigma that still surrounds mental illness. Like Rebecca, my initial struggle to accept my illness was worsened by fear of what people would think. I never related to the show more than when Rebecca tearfully told her best friend that BPD is “not something I have, it’s something I am.”

People have depression. They have anxiety. They have schizophrenia. But when you live with BPD, it’s easy to feel like it’s a permanent and inescapable aspect of who you really are — that you are, to be blunt, just an asshole.

Such stigma around BPD in particular can even come from the people you’re supposed to turn to for help, with some doctors and therapists choosing not to work with BPD patients. A forthcoming book from licensed clinical social worker Bill Eddy, 5 Types of People Who Can Ruin Your Life, seemingly advises readers to steer clear of having relationships with people with BPD. “Because most of us no longer live in the communities that used to screen out and manage these personalities, it has become essential for us to learn how to identify and avoid the volatile individuals that we often come across,” a press release about the book reads.

While Rebecca and I can occasionally alienate the people around us, a person with BPD isn’t someone to be feared — in fact, the characteristics of BPD aren’t all bad, Wright explained.

“In Crazy Ex-Girlfriend, we see that Rebecca Bunch is a vivacious, passionate, charismatic and often dynamic character who feels deeply and, as the show illustrates, enlivens the existence of those around her in West Covina,” Wright said. “Those with BPD are capable of great depths of feeling and can likewise be beautifully sensitive, wonderfully expressive and passionate. [They] can also possess a great capacity for caring and empathy.”

My BPD means I love with my whole heart, but can still lash out at the people I love over the tiniest annoyances. It means I’m fiercely loyal and flaky at the same time. It means my moods can turn on a dime, but when I’m happy, I’m euphoric; when I’m sad, it feels like I’ll never smile again. It means I idealize people even when pushing them away, which I now know is probably a self-defense mechanism against one of the primary symptoms of BPD — the fear of being abandoned.

Yet despite the more positive and beneficial aspects of BPD, it can be extremely hard to share your illness with others — in truth, this essay is essentially my “coming out” story as someone with BPD, minus the handful of family members and close friends whom I’ve already told. But like myself, the potential stigma Rebecca now faces doesn’t seem to be hampering her drive to get better. She’s attending group therapy and throwing herself head-first into treatment while still making sure to have a bit of fun along the way.

Through medication and both individual and group therapy, my own journey has become easier to manage since my diagnosis a few months ago, though I still exhibit mood swings and other classic symptoms of BPD — the impulsivity, intense anxiety and, from time to time, suicidal ideation. But just as I hope for a brighter future ahead for Rebecca, I trust I’ll be able to successfully navigate my illness, one day at a time.