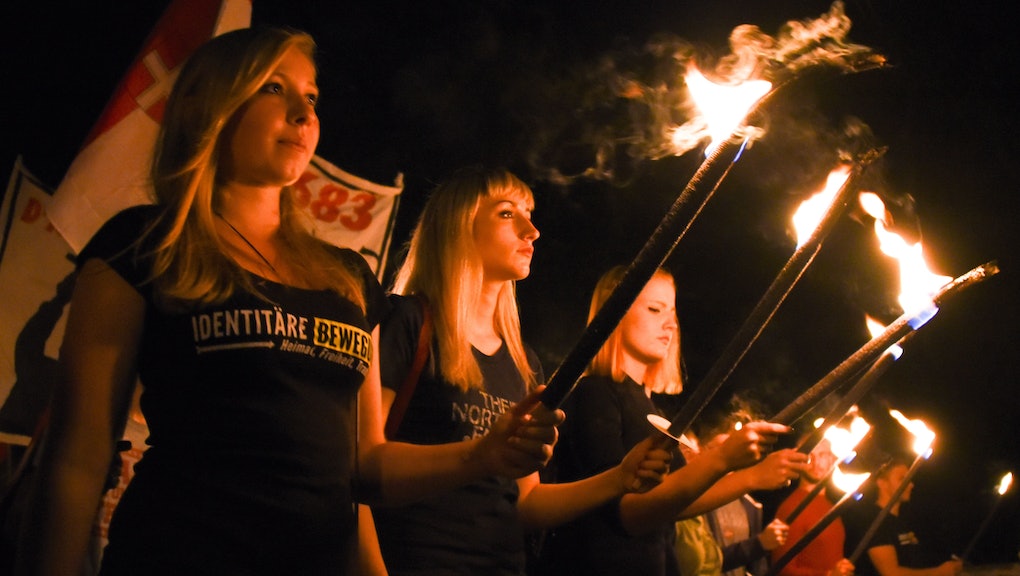 The women of the “alt-right” are speaking out against misogyny. They’d prefer absolute patriarchy.

The white supremacist right has a slogan, a clarion call that binds the movement across countries and generations. It’s called the “14 words”: “We must secure the existence of our people and a future for white children.”

Buried within that mantra is a dangerous implication for an extremist movement dominated by white men: They’re going to need a lot of white nationalist women.

But over the past few weeks, a small faction of devoted misogynists within the far-right is leading a wave of harassment against prominent white nationalist women. Male chauvinist celebrities have lead online “thot patrols” and dug up photos of far-right women who’ve allegedly dated men of color.

“Men in the alt-right are going to have to decide whether they will continue to passively/actively endorse this behavior, or speak out against it,” far-right video personality Tara McCarthy wrote in a now-deleted series of tweets. “If you want more women speaking publicly about ethno-nationalism, I suggest you choose the latter.”

This recent conflict has been poorly framed in the media as the women of the alt-right suddenly discovering misogyny within the movement. But the nationalist right’s most prominent women, many of whom are Christian fundamentalists, are perfectly fine with a patriarchy that wants to relegate women to the roles of homemakers and child-bearers.

The true reckoning among white nationalists is one that’s been coming to a boil since the inception of the so-called “alt-right.” In its infancy, the rise of the alt-right brought white nationalists into an uneasy alliance with some of the internet’s most destructive misogynists. And now that there’s a rising uptick against nationalist women, the men of the far-right must either mitigate or exile this new strain of misogynist extremism, or risk cannibalizing their most effective stars and propagandists.

Women within the far-right told Mic they were hesitant to speak about the issue with reporters, and that the conversation had become an unfortunate internal debate between two factions that could never truly coexist.

During the 2016 election season, the alt-right materialized as an umbrella group pulling together a range of reactionary sects. There were the anti-feminists of the GamerGate movement, the fratty “pro-West” Proud Boys, right-wing provocateurs, traditional neo-Nazis, Southern Nationalists and even some elements of the militia movement. It was a jumbled cornucopia of disparate ideologies bound together only by support of then-candidate Donald Trump and a common enemy embodied by the dreaded “social justice warriors.”

The big tent couldn’t hold for long. Soon after the election, the alt-right began to fracture, often along the lines of who was or was not deemed sufficiently racist. Militiamen scuffled with 4channers at a rally in Houston and pro-Trump provocateurs like Mike Cernovich and Jack Posobiec distanced themselves from the dedicated racists. Soon, the only ones willing to even tacitly wear the label of “alt-right” were avowed white nationalists.

But along the way, the white nationalist movement was introduced to a new source of recruitment: the virulent misogynists and men’s rights activists who came into the alt-right through forums like 4chan and Reddit. While ethno-nationalists preach veneration of white women willing to submit to patriarchy and traditionalism, many MRAs animated purely by male grievance prefer explicit hatred for women. Where most on the right refer to the process of awakening to the evils of liberalism as taking the “red pill,” these are men who describe their philosophy as the “black pill” of apocalyptic nihilism.

A favorite meme of this crowd is “white sharia,” which white nationalist and ex-marine Sacco Vandal described in a recent blog post as “a rallying cry for the disillusioned young men in our movement as well as their guiding light.”

“Sharia law, though practiced today by some of the world’s most despicable races, is the only living example of anything that even remotely approximates the patriarchal society that Western man once had himself,” Vandal wrote.

The worst of this scorn is often reserved for the women within the far-right, undertaking sexist witch hunts meant to shame them for showing leadership in what they see as a man’s movement.

“I’m not going to get married at 22 years old just so that I won’t be called a degenerate on the internet,” nationalist figurehead Lauren Southern said in a recent video addressing her harassers.

And the reckoning has come, with a vengeance. In the past few weeks, the MRAs have regularly hurled sexist slurs at women like Lauren Southern, Tara McCarthy and Lauren Rose, leveling the tired accusation that they’re posing as traditionalists for mere fame and attention.

“They’re tricking a lot of men into thinking they’re the ideal, traditional woman when they’re no different than the skank I can find in any nightclub here,” Roosh V, a famous rape apologist blogger, said in a YouTube video posted Dec. 4. “In fact, in some cases, they are worse.”

The far-right needs women as evangelists more than the misogynist extremists recognize. Nationalist women have been historically useful in cloaking the violent machismo of fascistic movements as a project for restoration of sacred values and civil society.

“These women are very effective as propagandists,” James Allsup, a nationalist speaker and former College Republicans chapter president, told Mic. “There’s a clear and objective benefit in a movement to have people with the ability to reach the masses.”

As historian Linda Gordon writes in The Second Coming of the KKK, women, who had recently won the right to vote, were vital to building Klan power throughout the 1920s, not just as a cultural powerhouse for white supremacist messaging, but in delivering a new electoral constituency to the polls for senators and congressmen sympathetic to the Klan.

The KKK notoriously exaggerated its membership rolls in its propaganda, but Gordon estimates that as many as 1,500,000 women were members of Women’s Klu Klux Klan.

“Women did a tremendous amount of Klan labor,” Gordon said. “Every time they put on a big pageants, or a big lecture, you can be sure it would be women doing the publicity, collecting the food, and other standard women’s roles.”

Eventually, the vision of empowerment offered to the women of the KKK found its limits. Men stepped in to exert their power, assigning their own leadership over the WKKK, as women resisted sending their monetary dues up to the male leadership of the Klan. In 1923, women leaders even moved their headquarters to Little Rock, Arkansas, away from the Atlanta headquarters of the KKK, as a gesture of their autonomy. All the while, it was largely women holding fundraisers and running Sunday school-like youth programs to train the next generation of the Klan.

By this time, it was clear women would be expected to uphold all of the responsibilities of male KKK organizers, while also taking a backseat and fulfilling essential domestic obligations.

The Red Pill, or the Black Pill

This power dynamic isn’t relegated to the 1920s. As a former skinhead, Shannon Martinez saw this story play out in her own relationship with the white power movement of the 1990s, pulling double-duty as a homemaker for adolescent racists even as she tried organizing her own efforts for recruitment and evangelism.

“We could organize and put up fliers, but it was expected that I asked permission from whatever guy I was dating,” Martinez told Mic.

Martinez has dedicated her time since leaving the movement 25 years ago — a boyfriend’s mother helped pull her out — to helping other young people get out, too. She volunteers with Life After Hate, a group that helps white supremacists leave their communities by providing an empathetic support network to young members of modern hate groups so that they can find a path away.

Martinez isn’t the only one who sees an opportunity to teach and reform. There are white nationalists who believe that these extreme misogynists can be rehabilitated through the same fascistic appeals that have led disaffected young men into the arms of extremist groups for a century.

“What we need to do to counter the nihilism is give them a vision of the future,” Matthew Heimbach, one of the country’s leading neo-Nazi leaders, told Mic. “When they get up in the morning, they need to know their sacrifice means something, and their life matters.”

Kirsten Lauryn, a rising right-wing YouTuber who identifies as a Catholic “monarchist,” told Mic that though she’s been on the receiving end of these aggressors, she knows their pain. Though she refers to her harassers as “pathetic weasels,” she sees their grievances as akin to her own struggles with women she grew up with, who wanted independence and a career over a future as homemaker.

“I feel sympathy for these men who’ve given up, because it’s something I’ve felt in my own life toward women friends I’ve known in the past — the progressive types who are keen on destroying marriages,” Lauryn said.

These warring visions of patriarchy — an agrarian return to the home and kitchen for women, versus the “white sharia” of overt violence and oppression — are both animated by the same classic tropes of fascistic obsession: an alleged downfall of Western civilization, the erosion of so-called family values and the fear of lost status amid the increased enfranchisement of oppressed minorities. While the white nationalists of the new far-right see the two visions as incompatible, even some of their strongest voices have trouble imagining a compromise.

“We’re living in a very different age right now, and a lot of us on the conservative end of things are longing for an age we’ve never lived in,” Lauren Southern said in her video.

Even without the explicit misogynists and MRAs, Southern and the women of the far-right will have to reckon with exactly how much independence the men at the helm of white nationalism are willing to tolerate. The irony, if not absolute hypocrisy, is lost on no one.

“Admit it, Lauren,” one commenter responded. “You’re focusing on your career.”