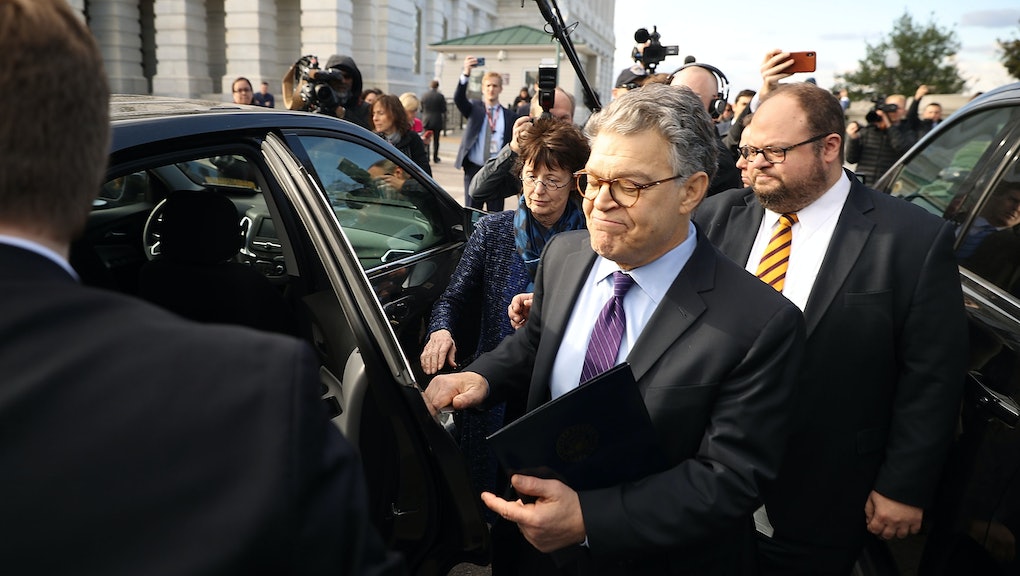 The #MeToo campaign has swept Capitol Hill. Are there more resignations to come?

Whether you wanted Sen. Al Franken (D-Minn.) to resign is irrelevant. What matters now is the precedent set by his resignation.

Seven allegations of sexual assault and harassment, primarily unwanted groping, was enough to make Franken’s colleagues turn against him and call for his resignation. He announced on Thursday from the Senate floor he would soon step down.

For former Rep. John Conyers (D-Mich.), it was multiple allegations of sexual harassment in his role as a congressman. Conyers announced his resignation Tuesday.

Rep. Trent Franks (R-Ariz.) said Thursday evening that he would resign in January after the House Ethics Committee opened an inquiry into Franks asking two female staffers to be surrogates for his children.

That committee has also reopened an investigation into a complaint Rep. Blake Farenthold (R-Texas) retaliated against a woman who accused him of sexual harassment. That led to an $84,000 taxpayer-funded settlement, which Farenthold says he will pay back.

Another Democrat’s future is also in doubt. Rep. Ruben Kihuen (D-Nev.) is resisting calls to resign after allegations of sexual harassment emerged about his congressional campaign.

Rumors are publicly swirling among political observers that the number of lawmakers accused of sexual harassment could grow far higher. A longtime Democratic Party aide tweeted Thursday that CNN and the Washington Post are working to expose up to 20 to 30 members of Congress for sexual harassment. A former Wall Street Journal editor says it may be 40.

Capitol Hill may be far from done dealing with these scandals. And the resignations of Franken and Conyers mean the bar to leave Congress is now far lower than sexual assault or harassment of minors — which Alabama GOP Senate candidate Roy Moore has been accused of by nine women.

This moment is also highlighting women in Congress, with Sen. Kirsten Gillibrand (D-N.Y.) emerging as a leader in reforming Senate policies and speaking out against harassment. A nearly simultaneous call from Democratic women in the Senate for Franken to resign on Wednesday was a powerful moment, and sent a clear message: We will not stand for this.

More: Vox detailed the bizarre scene on the Senate floor after Franken announced he would resign. Democratic senators, including some who called for Franken’s resignation, consoled Franken and thanked him following his speech.

Today’s question: Do you think more allegations against lawmakers will surface?

Shutdown averted: On Thursday, Congress passed a bill that will keep the government open for two weeks. By Dec. 22, House Republicans will have to come up with a plan that at least eight Senate Democrats will support.

House Democrats continue to say they will demand protections for immigrants who were brought to the United States as undocumented children as part of a year-end spending deal. House conservatives do not want protection for recipients of the Deferred Action on Childhood Arrivals program to be confirmed this year, which will likely lead to a Senate showdown.

Tax reform: Sen. Susan Collins (R-Maine) says she will not necessarily support a final tax bill if the House does not preserve her amendments, which include the stabilization of the Affordable Care Act, by year’s end. This likely won’t fly with House conservatives.

Jobs numbers: The U.S. economy added 228,000 jobs in November, and wages inched up. And as the number of households grew 50% since 1983, the number of millionaire households has grown 279%. But the American middle class is still in decline.

Russia investigation: Rep. Devin Nunes (R-Calif.) was cleared from allegations of giving classified information to the Trump administration. That means the controversial head of the House Intelligence Committee could return to his oversight of the Russia inquiry.

School shooting: A cheerleader and a football player were killed when a gunman opened fire at a high school in rural Aztec, New Mexico, near the Colorado border. That came a day after the House passed the Concealed Carry Reciprocity Act to make it easier for Americans to move concealed guns across state lines.

Democrat blues: Democrats running in key congressional districts are expected to sign a party document saying they will champion the party’s “shared values” and focus on “unity.” Progressives say this aims to stifle dissent within the party.

Mississippi: Trump will soon open the Mississippi Civil Rights Museum in the state with the highest proportion of both black and poor residents. Rep. John Lewis (D-Ga.), a civil rights icon, has said he will not attend. And black people living near the new museum told the Washington Post that Trump has stirred old racist demons in the South. Jackson Mayor Chokwe Antar Lumumba said Trump should not attend the museum opening. They say Trump’s policies do not show a commitment to improving civil rights.

FBI: In congressional testimony, FBI Director Christopher Wray defended his agency against attacks from Trump. Trump tweeted Sunday that the FBI’s reputation is in “tatters,” the “worst in history!”

Mic: Criminal charges against Mic reporter Jack Smith IV, who was reporting on the Dakota Access pipeline protests have been dropped.

Alec Baldwin breaks character — and tells Mic why he believes Trump needs to be held accountable. Click or tap the video below to watch.