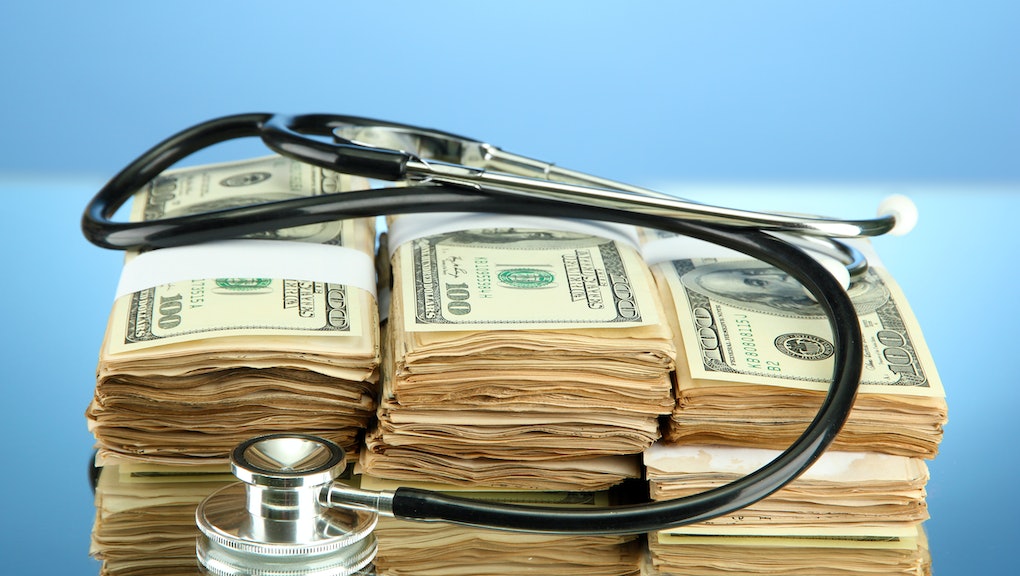 Health Insurance Deadline 2017: What to know about marketplace plans on the last day to apply

The Friday, Dec. 15 deadline to buy health insurance through the Affordable Care Act marketplace exchanges has arrived — and signups end at midnight, Pacific Standard Time. Haven’t yet signed up yet? It’s a good idea to read up on any confusing lingo (copayments, coinsurance, deductibles, premiums... oh my!) and then take the plunge at healthcare.gov — rather than waiting until the last minute. There are luckily a few smart moves you can make that could help you keep costs under control.

Feeling stressed? You’re not alone: Getting health insurance affordably is currently a major concern for people in the United States. In the Public Religion Research Institute’s 2017 American Values Survey, 50% of Americans said they were worried about either themselves or a family member losing health insurance in 2018. And close to half of respondents said health care costs should be the top priority of President Donald Trump’s administration and Congress, more than any other policy issue included in the survey.

It’s not hard to see why. Americans are already struggling to keep up: Close to one in four nonelderly adults have at least some past-due medical debt, according to estimates from the Urban Institute. To make up for the shortfall, consumers may turn to credit cards. A recent debt survey from personal finance site NerdWallet estimates that as many as 27 million people are putting some $12 billion in medical expenses on a credit cards each year, amassing a typical extra $470 in interest for a year’s worth of medical spending.

Alas, there are several reasons health care costs could keep rising. For one, there’s the Senate’s attempt to repeal the Affordable Care Act’s individual mandate in the Republican tax reform bill. Still, uncertainty remains: Given that the attempt to reconcile the legislation with the House of Representatives’ version is ongoing, nobody — not insurers, lawmakers or patients — can be entirely sure what the final law on health care insurance will be in 2018.

Yet other factors make it more likely 2018 will be a costly year for care, beyond uncertainty in the marketplace. These include rising drug costs and inflation, plus a growing wave of health industry mergers that antitrust experts worry will hurt competition. Here are three major ways these factors affect you — plus advice on how to take matters into your own hands to cut health care costs.

1. The ACA could be weakened, if not repealed, increasing premiums

You might have noticed that 2017 has been an uncertain time for health care policy — so much so that “uncertainty” has been unofficially dubbed the word of the year in the community, as health law experts convene Tuesday for the Sixth Annual Health Law Year in P/Review at Harvard Law School.

Even though attempts to repeal the ACA outright have been unsuccessful in 2017, the Senate’s version of a bill to overhaul the tax code — currently being reconciled with a different version passed in the House — would repeal the ACA’s individual mandate, which requires people to sign up for health insurance or risk paying a tax penalty.

The problem, economists argue, is that removing the mandate makes it less likely healthy people will enter the insurance pool — which has been a crucial way to keep premiums cheaper for everyone. In fact, repealing the mandate is expected to drive up premiums by 10% relative to what they’d be under current law, according to the Congressional Budget Office. That’s like paying an extra $600 annually, if you’re an individual who earns too much to qualify for subsidies and purchases the silver-tiered plan in New York, according to a premium calculator from the Kaiser Family Foundation.

Trump’s administration added further uncertainty when it halted cost-sharing reduction payments, which are government subsidies to insurers who provide services to low-income people. That alone will result in premium hikes between 7% and 38% in various markets, the Kaiser Family Foundation found. In exchange for a “yea” vote on tax reform, Sen. Susan Collins (R-Maine) required a promise that Senate Republicans would hold a vote on extending cost-sharing payments for two years, but there’s no guarantee that will happen.

Another upward pressure on health costs is the increasing wave of consolidation in the health care industry, which antitrust experts fear will reduce competition and lead to higher costs.

Generally speaking, the more options consumers and businesses have, the better. More players means more competition, which creates an incentive to offer lower prices. A recent study of hospital mergers from researchers at Kellogg School of Business at Northwestern University found that in-state hospital mergers led costs to rise between 6% and 10%, for example.

Why is this happening? For one, Federal Trade Commission officials have been lax in enforcing consumer interest when it comes to health care mergers since the mid-1990s — when several court losses prompted the agency to suspend lawsuits to block hospital mergers, said Lillian Salerno, a former Department of Agriculture official under President Barack Obama.

“Because it’s health care and most elected and agency officials refuse to dig into how the system works, Congress has allowed exemptions from antitrust laws,” Salerno said. That has “inadvertently created disincentives which have meant increasing health care costs instead of lower prices as in other sectors.”

The firms behind the mergers argue consolidation helps create efficiencies and “synergies” that can lead to better care for patients. That may actually end up being the case with some mergers, according to Austin Frakt, a health care economist with the U.S. Department of Veterans Affairs.

“On the whole, integration and consolidation tends to increase prices,” Frakt said. “The reason [Aetna and CVS] work out better is if more integrated care is better care and if the kinds of services and conveniences patients get becomes more readily available. That’s plausible, but not guaranteed.”

Some antitrust experts are skeptical of whether those benefits will be passed onto consumers. Phillip Longman, policy director at the Open Market Institute and a health policy lecturer at Johns Hopkins University, said the Aetna-CVS merger could create new problems along with the ones it solves. While its scale could indeed deliver savings to consumers, Longman said, that’s only if it’s accomplished without creating a monopoly — which he fears CVS might become if it ends up pushing out other drugstore chains.

Political problems aside, health care costs were still likely to rise more quickly in 2018 than they did in the previous two years, according to an industry report from PricewaterhouseCoopers’ Health Insurance Institute. In June, it predicted health care costs would increase by 6.5% in 2018, the most since 2015.

There are three major factors for why it projected the climb: The first has to do with a surging economy and the ensuing decision from the Federal Reserve to raise interest rates. That makes the cost of goods and services — including those in the health care industry — more expensive in general. The Fed is widely expected to announce a new rate hike Wednesday.

Furthermore, fewer patents than usual for brand-name drugs are expected to expire in 2018 — meaning there will be fewer generic brands entering the market to help drive down costs. That’s a big problem for consumers who could otherwise reduce prescription drug costs by up to 85% simply by buying generic, according to data from the Food and Drug Administration.

The lack of generic prescription drug producers has lead to a steady increase in costs for certain drugs, in some cases by as much 47% in the five years between 2008 and 2013, according to a 2017 paper published in the Annals of Internal Medicine. The report also cited a lack of market competition as one of the main reasons for the climb.

Now for the good news: How to save money on health costs with subsidies or free care

All of this bad news is a bummer, but you shouldn’t feel helpless. First, know that you might be able to find yourself a better deal on health insurance outside of the federal exchanges: You can look for a plan by using HealthCare.gov’s local broker-finder or the comparison tools listed on Consumer Reports. If you’re self-employed, you might find out whether you qualify for lower-cost group insurance.

If you will go through the exchanges, you might consider shopping around for a premium “gold plan” — since the price of those plans are surprisingly rising less quickly than the benchmark “silver” plans. If you qualify for ACA subsidies, purchasing a gold plan might even end up being cheaper, while also reducing your out-of-pocket expenses.

Another option to consider? Insurance is likely to be the most unaffordable for people who make slightly too much money to receive full federal subsidies, but still too little that insurance is tough to afford.

If that sounds like you, you might start looking for ways to reduce your taxable income — perhaps by aggressively saving some extra cash in a tax-advantaged retirement account — so you can qualify for better subsidies.

And, if offered, it’s always a good idea to make use of a health savings account through your employer, since this can help you set aside tax-free dollars to cover your medical expenses throughout the year.

Finally, check out the Payoff’s guide to getting low-cost or free health care, regardless of your insurance coverage situation.