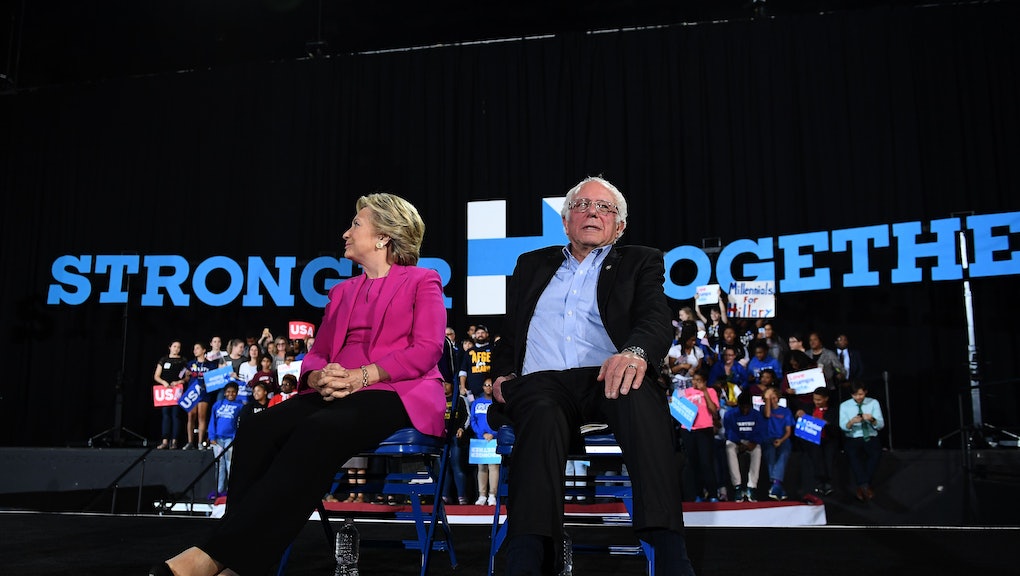 WASHINGTON — In a small hotel conference room adjacent a Washington, D.C., anime festival, a group of Democrats gathered Friday to try and solve their party’s biggest looming divisions from the 2016 campaign.

Amid the throngs of costumed teens, the Democratic National Committee’s Unity and Reform Commission — a panel of Democrats appointed by Bernie Sanders, Hillary Clinton and DNC chair Tom Perez — worked to craft a plan for fixing the party’s nominating process, which many grassroots Democrats fear was rigged in favor of Hillary Clinton.

The URC was formed at the 2016 Democratic National Convention in Philadelphia as a way to try and ease tensions between the Sanders and Clinton wings of the party after a rough presidential primary.

The panel was tasked with focusing on solving several major issues from the 2016 race, and, on Friday. they moved decisively toward making major changes for the 2020 primary, but found themselves at a odds over other key issues concerning the way the DNC operates.

The first change the URC agreed to support would dramatically reduce the role of unpledged or “superdelegates” in the party’s nominating process. Superdelegates are Democratic party members in high standing who are able to vote for whomever they choose without being bound by the results of their home state’s primary or caucus results.

During the 2016 Democratic primary many supporters of Bernie Sanders complained that superdelegates’ early support for Hillary Clinton tipped the scales in her favor. Clinton supporters argue that Hillary Clinton also won an outright majority of pledged delegates in the primaries and caucuses.

The second major change agreed upon Friday night was a plan to compel states to allow vastly more people to vote in presidential primaries. Currently many states choose to hold “closed”primaries,” or primaries in which only registered members of the Democratic party can vote.

These requirements place high burdens on “unaffiliated” voters who generally support Democrats and want to vote in Democratic primaries, but have not registered as Democrats far enough in advance. In New York State, the deadline for declaring one’s party affiliation is 193 days before the primary, meaning unaffiliated voters must plan well in advance if they wish to vote. Many Sanders supporters complained that this alienated the many “independent” voters who supported Sanders’s nomination.

The URC’s new plan would take several steps to try and compel states to offer “same-day” voting registration for all primaries, with no limits on individuals who want to switch parties the day of the vote.

The commission’s deliberations on these two issue were in many ways a perfect microcosm of the Democratic Party: a group of people who agree most of the time while barely being able to conceal their lingering animosity over the small number of issues on which they don’t agree. But those tensions became too great to conceal when the commission moved on to discussing the broader issue of reforming the DNC itself.

In early November former DNC interim chair Donna Brazile revealed in a tell-all book that unbeknownst to her, the party had been spending considerable sums on high-priced consultants and entering into financial arrangements with the Clinton campaign that left the party subject to influence at a time when it was supposed to remain neutral.

In addition, these financial arrangements had the effect of funneling money raised by state and local party organizations into the coffers of the Clinton campaign and the DNC.

Even before the revelations in Brazile’s book, some longtime members of the DNC had been aware of these problems and had been using the URC’s party reform mandate to try and solve them. Mic reported extensively on their efforts in October.

As the URC turned it’s attention to party reform, James Zogby, a member of the URC and a longtime DNC member, noted that there were a number of DNC bylaws relating to budget transparency that were essentially unenforceable. On Friday, several proposals were made to try and fix these issues, including limits on the role of consultants in the party, and a new mechanisms for enforcing budget transparency to try and ensure that situations like the ones described in Brazile’s account did not happen again.

At one point, URC member Nomiki Konst shouted from her seat on the dias that the amount of money being spent on consultants was “fucking corruption,” to a smattering of cheers from the small public audience who attended the meeting.

At one point in the deliberations, the URC recessed for lunch and the deliberations continued behind closed doors in a private session where the URC’s reform plan was placed on a large screen and debated by members.

Though the DNC’s bylaws state that its meetings must be open to the public, in a bit of irony, journalists were not allowed to attend these lunch deliberations.

Eventually, the most contentious provisions on budget transparency and accountability were tabled for Saturday’s meeting.

When asked what the prospects were for passage, one URC member who supports reforms said that he was “not optimistic.”

The URC meets for it’s final session on Saturday. After that, the commission will present its full report to the DNC for adoption.