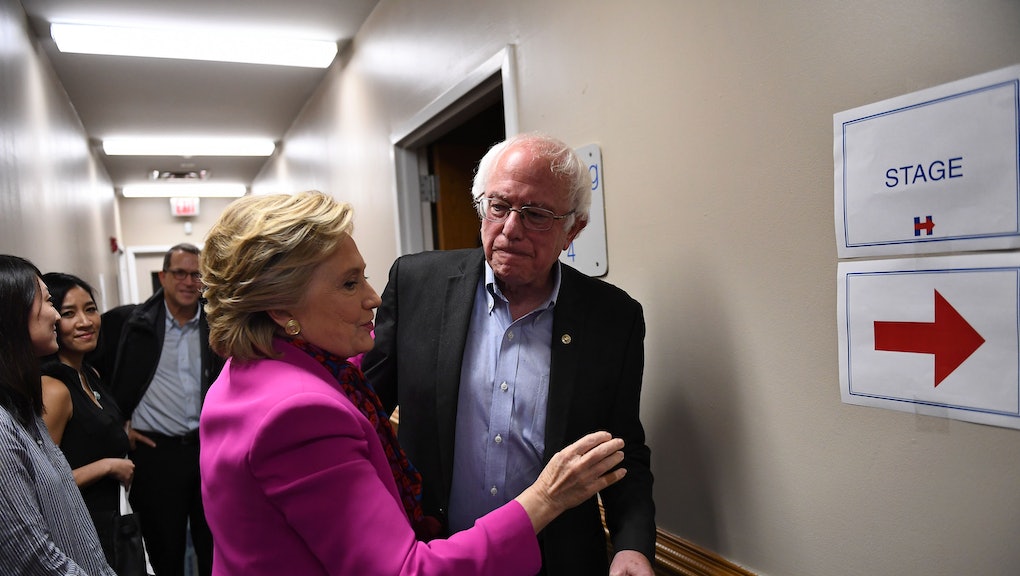 A panel of Democrats appointed by former Secretary of State Hillary Clinton and Sen. Bernie Sanders (I-Vt.) has just put together a sweeping package of reforms that takes a big step toward reforming the party’s primary process and putting the divisions of the Hillary Clinton-Bernie Sanders primary behind them.

The panel, known as the Democratic Unity and Reform Commission, has been laboring to find a consensus on reforms for months. Many of the provisions included in the new proposal were hotly debated by members both in public meetings and backroom deals during the final meeting of a two-day summit for commission members in Washington, D.C.

Among the new provisions agreed to are measures that would:

• Reduce the number of superdelegates in the Democratic Party by nearly two-thirds.

• Pressure states to allow people to switch parties on the day of Democratic primaries.

• Create new budget and fundraising accountability measures, which had become a significant sticking point between the two factions of the party.

• Limit the DNC’s dependence on high-priced outside consultants.

During the 2016 presidential primary, supporters of Sen. Bernie Sanders were aggrieved by the influence of unpledged superdelegates who could vote for whichever presidential candidate they chose at the convention and were not bound by the results of their primary in their home state.

The reforms agreed to in the proposal would limit superdelegate status only to current members of Congress, Governors, current and former party chairs and former presidents and vice presidents.

Some Clinton backers felt that the caucus system, where voters engage in a lengthy ritual of speeches and pledges to choose their nominee, was undemocratic and favored privileged people who had the means to spend long hours taking part in the caucuses held by 18 Democratic states and territories.

Sanders supporters countered that some states’ primary laws unfairly prohibited independent voters who supported Democratic candidates from participating in the primary process. They also argued that early party registration rules in certain states kept new voters who weren’t already Democrats from casting their votes in primaries. New York State, in particular, was mentioned several times during the deliberations because of its requirements that individuals register their party six months before the primary.

“When the party nominates a candidate it needs to be transparent and easy to figure out,” said Larry Cohen, the former president of America’s largest communications union who was appointed by Sanders to be the committee’s vice chair. “People need to feel like the option really belongs to them and it’s that it’s democratic and I think this helps us do that.”

The URC also agreed to a number of reforms to the way the DNC operates. On Friday, the committee debated for hours over the fate of several provisions that would empower an independent body within the DNC to oversee parts of the budget.

These provisions were directly related to the revelations made by former interim DNC chair Donna Brazile about how the organization’s opaque budget led the party to engage in questionable financial arrangements with the Clinton campaign and funneled money away from state and local parties.

Some members of the URC who supported those measures had expressed skepticism about whether the commission would vote to approve those measures because of limits they imposed on the DNC itself.

But after some last-minute negotiations, the panel was able to agree to the entire package of reforms.

“I’m proud of the work of the Unity Reform Commission,” DNC chair Tom Perez said in a statement on Twitter. ”We haven’t seen these types of sweeping reforms in over 30 years.”

Now the commission’s recommendations will move to the DNC’s rules and bylaws committee where they will debate adoption.

Some members cautioned that this phase will be the true test of whether the proposals are adopted.

“We did lots of great work and there was compromise,” said Nina Turner, who is president of the grassroots progressive group Our Revolution and was appointed to the commission by Sanders, “But none of this is going to happen unless the grassroots forces the DNC to do this work.”