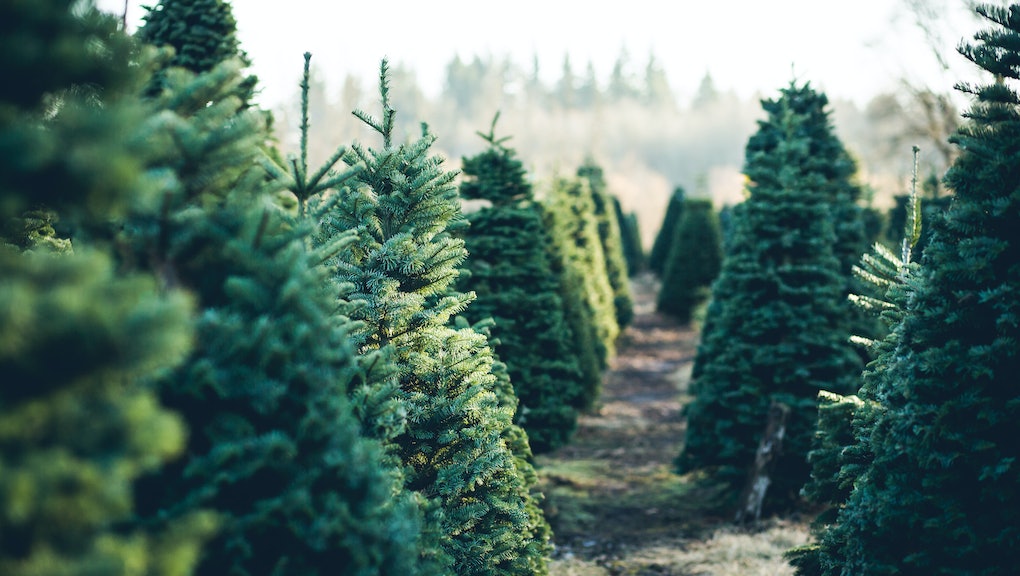 The holiday season is ostensibly a time to be with loved ones, but it has a dark side too. Like it or not, the winter months are also a time of excess — a time when we all spend and drink and eat and travel a bit more than we ought to. But it doesn’t have to be that way.

It’s perhaps unrealistic to expect everyone to have an entirely environmentally friendly holiday season, but some reevaluation of your annual traditions and holiday practices can go a long way.

Here are five ideas for making your holiday season a little friendlier on the planet.

You might think buying an artificial, plastic tree corpse is more environmentally friendly than a real one — but it’s probably not.

The data varies, but you’d probably have to keep an artificial tree for somewhere between 8 and 20 years before the environmental impact evened out when compared to buying a real tree, according to Huffington Post.

Some of that has to do with the fact that artificial Christmas trees are made from plastic, which takes an incredibly long time to degrade in a landfill. It doesn’t help that most artificial trees are shipped overseas from China, which only adds to their footprint.

By contrast, real Christmas trees — like other crops — are grown specifically for consumption by the public, so it’s not as though you’re contributing to rampant, ongoing deforestation by purchasing one. Additionally, most areas have tree recycling programs.

In New York City, for example, the department of sanitation will pick up clean trees left on the curb for a few weeks every January. The trees are chipped and turned into compost for a variety of gardens and parks throughout the city.

So, if you do opt for a real tree, make sure you keep in mind its full life cycle, and usher it into tree heaven with care.

2. Give the gift of an experience, rather than an object

Rather than drown your friends and family in doodads and plastic junk they don’t want anyway, why not give them an experience instead?

In place of a new sweater, why not book them a massage? Instead of buying a pricey new pair of headphones, why not buy them concert tickets to see their favorite band in person?

Not only will these experiences likely have a smaller impact on the environment, but they’re likely to be way more memorable.

If you’re like most people, the holidays probably mark an increase in your alcohol consumption. All that drinking doesn’t just take a toll on your liver — it also has an environmental impact. But a few small tweaks in your behavior can go a long way.

For example, if you’re buying wine for a holiday party, consider buying a bottle from a nearby area instead of one that had to be shipped halfway around the world to get to you. If you’re in California, buying something from Napa Valley will be a wiser choice, environmentally speaking, than something from France. In New York, the reverse is true.

If you’re more of a whisky person, consider opting for Maker’s Mark. It sources its grain locally and uses the waste from the distillation process to generate energy.

If you’re a fan of beer — first, come sit by me — and then look for breweries taking steps to be more sustainable, like New Belgium. According to its website, New Belgium diverts 99.9% of its waste from landfills and generates a portion of its own electricity using photovoltaic panels.

If you’re in the market for some new light decorations, make sure you purchase ones that use LED bulbs, which are far more energy efficient than incandescents. They’re more expensive up front, but they drain far less energy and last much longer.

According to the U.S. Department of Energy, the cost of operating LED lights for 10 holiday seasons is just $17.99, compared to the $122.19 it’d cost to power incandescents over the same period of time.

Few things are more thrilling than seeing a banquet table overflowing with hot, fresh food — but some longtime holiday staples are a major drain on the planet.

For example, that Christmas roast beef generates 10 to 40 times more greenhouse gas emissions than veggies. This isn’t to say you have to go entirely vegetarian, but making smarter choices can make a big difference.

Rather than centering your entire meal around a giant slab of meat, consider shifting the proportion of your family’s meals to emphasize fresh, local veggies too. Use this seasonal food guide to find fun, new recipes that’ll celebrate seasonal produce in your area.