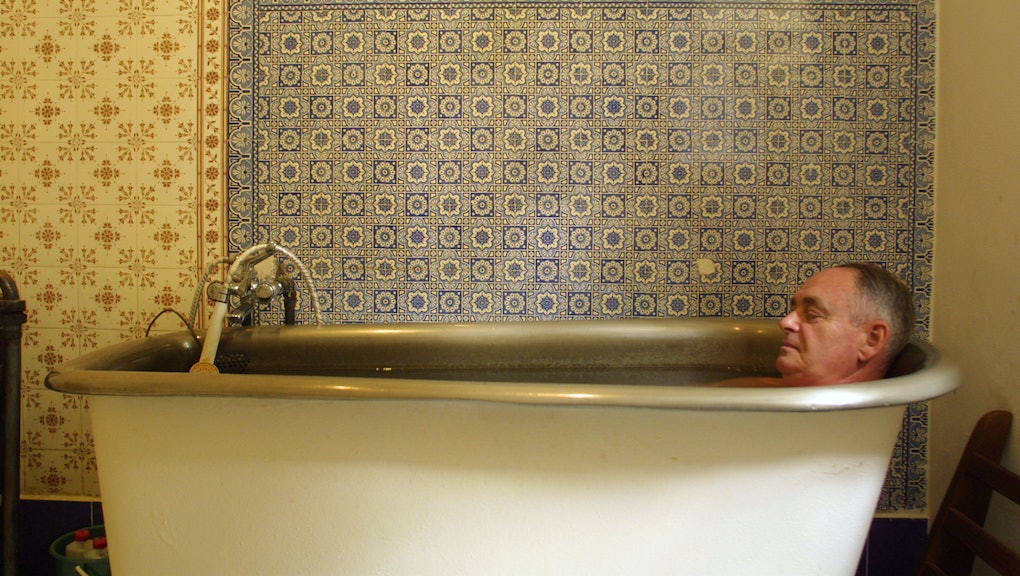 Can sitting in an 82-year-old mineral water bath tub really do anything for your health?

The Roosevelt Baths and Spa in Saratoga Springs, New York, are more than 80 years old — and they look it. The spa consists of 42 individual “treatment rooms,” all equipped with their own toilet, tub and massage table. The rooms are situated down a long hallway that kind of looks like a nicely tiled psych ward.

It’s a curious thing that these baths are a top attraction for visitors to Saratoga, a city about 30 minutes from Albany known for its racetrack, wealth and whiteness. The spa, open 363 days a year, sees some 20,000 naked bodies annually. A 40-minute mineral bath soak costs $35 to $45; Mic was hosted by the New York State tourism board. Clients can opt for a number of additional treatments, from massage therapy and facials to even reiki. It all sounds luxurious, but then you’re shown to the bathroom:

Why, oh why, would someone pay money to sit in this grungy-looking tub?

Saratoga’s mineral water has alleged health benefits and the Roosevelt Baths attract people of all ages and “caters to all lifestyles,” spa manager Jared Taisey said in a phone interview. During the first half of the 20th century, balneotherapy — the treatment of conditions by bathing — was studied extensively and recommended by doctors. “During that time, treatments at Saratoga Spa were supervised by medical doctors,” Nathaniel Altman, author of Healing Springs: The Ultimate Guide to Taking the Waters, said in an email. “The waters contain a unique combination of free carbon dioxide with sodium chloride and bicarbonates of sodium, calcium and magnesium that placed Saratoga on the level of several famous European spas.”

In full transparency, the tub room isn’t as morose as the photo indicates; the dimly lit space is soothing and free of distracting technology, making it a peaceful place to just chill. And that rusty-looking water is formed out of a chemical reaction: “The water does come out crystal clear, but when it hits the air — and we mix it with a very small amount of hot water — the iron content is actually oxidizing, giving it the brownish color,” Taisey said. Think of it as blue blood turning red when exposed to the air.

The mineral water at the spa is sourced from the nearby Lincoln mineral spring, where the water contains a high concentration of carbon dioxide, sodium, potassium, calcium, magnesium and a host of other elements believed to contribute to feelings of well-being.  The spa brochure says the minerals found in the bubbly water can “provide healing effects to various body organs and systems.” including “stimulation to the immune system, leading to enhanced immunity; the production of endorphins; and normalized gland function.”

After a 40-minute soak, I felt a little lightheaded, but not all that different.

Balneotherapy may also relieve stress, improve skin and soothe muscle and joints, Altman said. Saratoga became particularly popular because “many people believed that they benefited from regular bathing and drinking the mineral waters found there,” he explained.

In present day, Taisey said many visitors find the waters helpful for treating skin conditions like psoriasis, dermatitis and fungal infections. “Minor scrapes do seem to heal more quickly after soaking in the tub,” the spa manager said.

The tubs are built 3 to 4 inches deeper than the floor so the bather can be “totally immersed in the mineral bath,” Taisey said. It’s good a consultant tells you about the deeper-than-usual drop, otherwise it’d be too easy to stumble.

When I took my first dip in the brown water, the relaxing effects were immediate. As an adult without an inviting bathtub at home, I don’t often have the time for “taking the waters,” as the activity was dubbed in the 1900s. I felt the effervescent quality of the water — a subtle, pleasant fizz brushed against my skin.

My entire body gently rose to the top of the tub. The float factor is one component of sensory deprivation, an experience shown to rid distraction and reduce stress, among other things.

Research has found therapeutic floating to have positive effects on blood pressure, anxiety, sleep and pain management; repeated sessions may increase the likelihood of reaping the benefits. Businesses have been formed to replicate the natural effects of waters like that of Saratoga’s, showing that there is some demand: Serene Dreams, located in New Jersey, is one such “floatation therapy center” that hosts guests in futuristic float tanks filled with Epsom salts for additional buoyancy.

After one long dip at the Roosevelt Baths, I can understand why one might splurge for a day in dirt-tinged bathwater. There was something comforting about being in a room steeped in history; I felt like I was participating in an ancient ritual. And, of course, I was: Native Americans had visited the natural springs for centuries, Altman said. Taisey added that the discovery and use of mineral waters dates back to more than 5,000 years ago.

Still, I think I might be able to find a similar sense of relaxation somewhere else — maybe on a raft floating on a lake, in a plain old Jacuzzi or in my own clawfoot tub... someday.