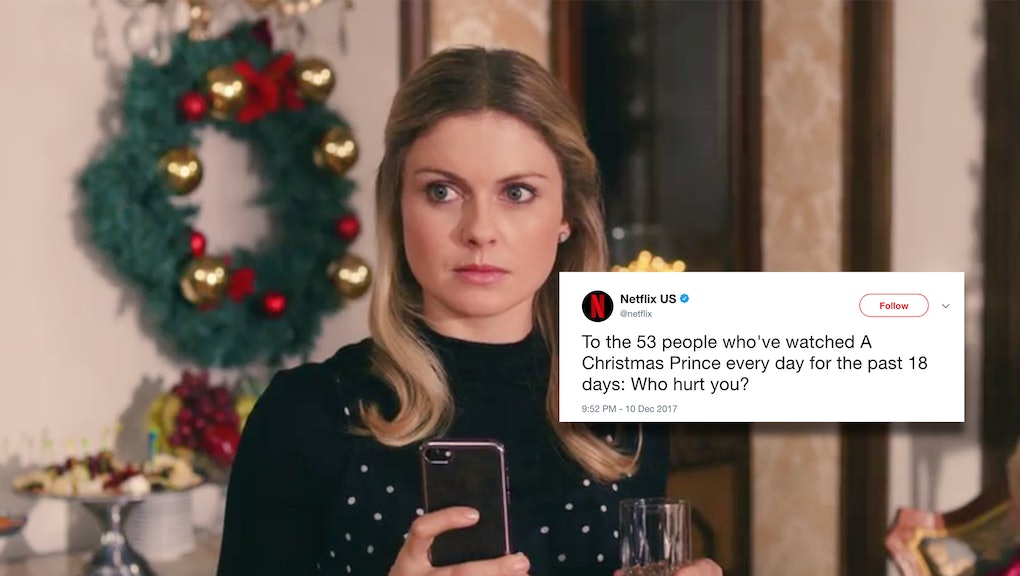 It’s not shocking that tech companies like Netflix and Amazon collect all sorts of sensitive data about you. They know you watch The Great British Baking Show, how long you watch it and when you’re most likely to go on a 10-hour binge. But did you know that Netflix employees might be able to single you out and leverage that watching data for an advertising campaign?

That’s the concern raised by a tweet posted on the official Netflix U.S. Twitter account, in which it appears to be poking fun at an incredibly niche subset of its more than 100 million customers who watched A Christmas Prince — a Netflix exclusive movie — over and over and over again.

“To the 53 people who’ve watched A Christmas Prince every day for the past 18 days: Who hurt you?” the tweet reads.

It’s easy to imagine what Netflix hoped to accomplish with this: It wanted to make an in-joke about the culture of binge-watching and the culture of hyperbolically shame-bragging about it online — but some people found it a little creepy.

Though Netflix’s tweet itself is relatively harmless, it raises a few important questions about the way Netflix collects, accesses and uses your data. For example, who at Netflix has access to an individual’s watching data? Can any social media manager access these kind of statistics when they’re brainstorming Netflix’s next tweet? Is this watching data tied to an individual’s name, or is it anonymized? Is it ethical for a company to shame its paying customers for the way they use its platform?

“The privacy of our members’ viewing is important to us,” Netflix said in a statement on Tuesday. “This information represents overall viewing trends, not the personal viewing information of specific, identified individuals”

This isn’t the first time a company has been criticized for an ad campaign like this. In fact, Netflix’s tweet is almost identical to a similar series of ads the music streaming service Spotify ran in 2016, in which it appeared to publish similarly sensitive data about customers’ most extreme listening habits.

Of course, there’s also the possibility that this is all just a big joke. Maybe a social media employee at Netflix just made up a statistic about its users as a way to get laughs. It’s hard to know for sure.

Regardless, it’s a good reminder that no matter how many millions of customers Netflix racks up, it knows you better than you think it does. And it’s always keeping an eye on you.