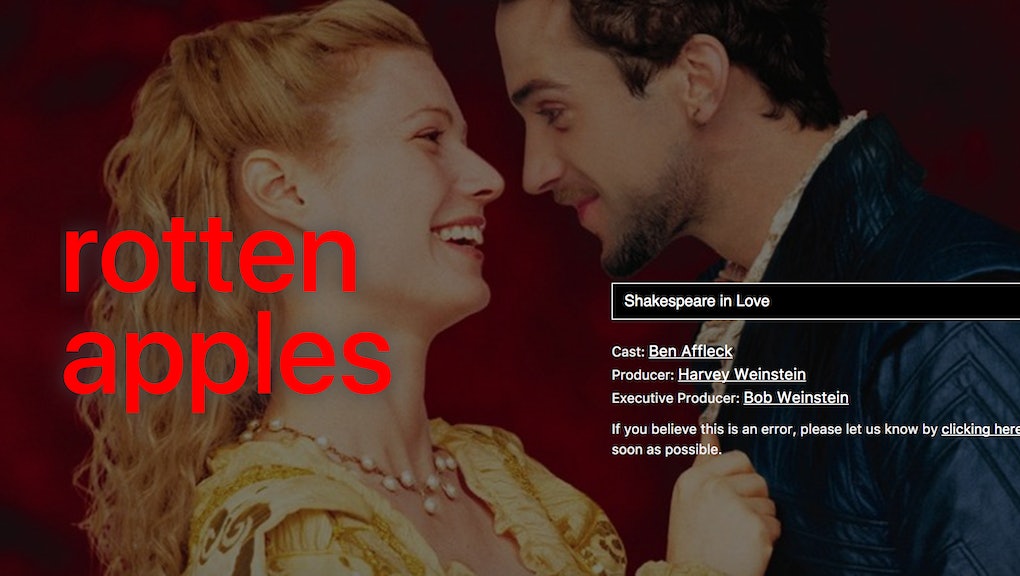 Want to know if you’re watching something made by an alleged sexual harasser? Check this database.

Every day, it seems like yet another powerful figure in Hollywood is accused of sexual misconduct. These accusations pervade just about every level of Hollywood, and include those made toward chefs-turned-reality-TV stars, like Johnny Iuzzini, and industry-shaping behemoths, like Harvey Weinstein.

We all like to think we can make smart, ethical, informed decisions when it comes to the films and TV shows we consume, but it can be hard to stay on top of the latest goings-on. You surely know Weinstein has been accused by multiple women of acts of sexual misconduct, but you might not realize exactly how far his influence reaches, or who else has had allegations brought against them.

That’s where a new site, called Rotten Apples, comes in.

Rotten Apples functions as a sort of database, allowing users to search for a film or television show to see whether someone accused of sexual misconduct was involved in its creation. According to the site, it only tracks relatively high-profile positions: actors, screenwriters, executive producers and directors.

“The goal of this site is to further drive awareness of just how pervasive sexual misconduct in film and television is and to help make ethical media consumption easier,” Rotten Apples’ site states. “By no means is this site meant to serve as a condemnation of an entire project.”

In an emailed statement, a spokesperson for Rotten Apples said it was made by a team of four — Tal Wagman, Annie Johnston, Justice Erolin and Bekah Nutt — who work together at Zambezi, an advertising firm in Los Angeles.

“The agency is supportive and always encourages its employees to engage in outside passion projects, and that’s what this is,” the statement said. “A project created by a group of passionate, creative colleagues concerned about the issue [of sexual harassment]. We work in the advertising industry, which is a message-making business, a business that informs consumers. That’s our skillset. So we created what we believe is a tool that communicates a message about the issue and informs people.”

For example, if you search for Shakespeare in Love, you’ll see bright red text that says “rotten apples,” informing you that at least one person accused of sexual misconduct was involved in the creation of that particular movie. In the case of Shakespeare in Love, it lists Ben Affleck, Harvey Weinstein and Bob Weinstein. Each person’s name is a hyperlink that’ll take you to an article to show you what they’ve been accused of.

[Editor’s note: Though Rotten Apples had included Geoffrey Rush in its database, after this article was published, Rotten Apples removed Rush from the database. An email from Rush’s lawyers said the connection of Rush to sexual misconduct allegations is “grossly incorrect.” This article has been updated to reflect his removal.]

It’s worth noting, however, that the site is not entirely comprehensive. For example, if you search Frida — the 2002 Frida Kahlo biopic starring Salma Hayek — it shows the message, “This movie has no known affiliation to anyone with allegations of sexual misconduct against them,” despite the fact that Harvey Weinstein’s company, Miramax, produced it. In fact, in a recent New York Times article, Hayek accused Weinstein of harassing her throughout Frida’s creation. (To help keep things as up-to-date as possible, Rotten Apples said it hopes users will flag any holes through its site or via its Twitter.)

Of course, despite Weinstein’s involvement in Frida, that might not be reason enough to call off a Frida watch party with your friends. As Hayek noted in her aforementioned Times piece, Frida was a movie Hayek worked tirelessly to make, and it’s clear that she feels strongly about its value.

Therefore, it’s best not to use Rotten Apples as a “things I can’t watch anymore” guide. Instead, it’s more effectively used as a way to better understand just how entrenched toxic behavior is in the entertainment industry and society at large. Hopefully, Rotten Apples will also serve as a reminder that we all play a part in effecting change.