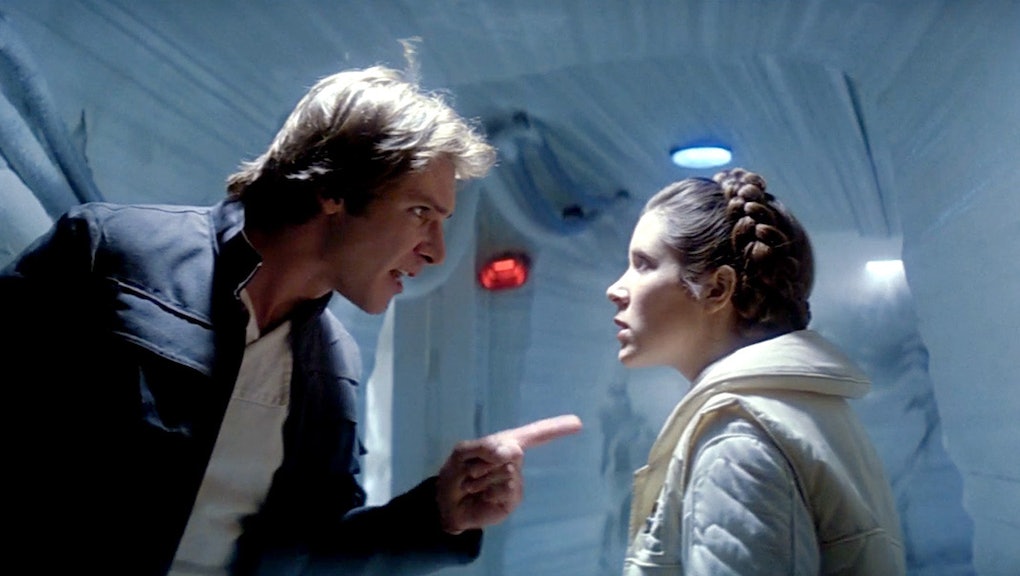 Does the best ‘Star Wars’ movie hold up in the #MeToo era? Let’s ask Han Solo.

Star Wars: The Last Jedi is now in theaters and reviews, like the film itself, are out of this world. The new movie, written and directed by Rian Johnson (whose previous credits include Brick and Looper), is the second chapter in the space saga’s new trilogy, continuing the momentum of its proper predecessor, 2015’s Star Wars: The Force Awakens. When that movie hit theaters, under the banner of Disney, it revitalized Star Wars and brought the franchise into the modern blockbuster era.

The latest films in the decadeslong series — Force Awakens, Last Jedi and the 2016 side-quest Rogue One: A Star Wars Story — are modern in ways beyond their sense of world-building and continuity, though. Disney has made it a priority to diversify the Star Wars universe and make it more reflective of who we are here on Earth in 2017. That means giving fans a female lead character (Daisy Ridley’s Rey) and more people of color (John Boyega’s Finn, Oscar Isaac’s Poe Dameron, to name just two).

But these long-overdue changes also make the shortcomings of the earlier Star Wars films — iconic and influential as they are — all the more apparent. True, it’s always been obvious just how white the original three films are, but in light of our current #MeToo movement, there’s another area where the older Star Wars movies are off-base, and that’s the issue of consent.

It’s not exactly news that the late Carrie Fisher’s Princess Leia was the only substantive female character in 1977’s Star Wars: A New Hope, 1980’s The Empire Strikes Back or 1983’s Return of the Jedi. And you’re probably familiar with the super-problematic Slave Leia outfit. But let’s set all that aside for a moment and focus just on Leia’s romantic arc in what is arguably the most beloved of those three classics: her relationship with Harrison Ford’s Han Solo in The Empire Strikes Back.

Put simply: Their relationship is weird, and Han’s a creep.

You want examples, you say? Let’s roll the tape.

In the moment above (1:40-1:57), Princess Leia and Han are in the cockpit of Han’s spaceship when there’s a rumble and Leia accidentally falls into Han’s lap. Once she gets her bearings, Leia says, “Let go.” Does Han do the sensible thing (listen and let her go) or does he instead do something problematic? If you guessed problematic, you win!

When she says, “Let go,” Han responds “Shh,” as he tries to figure out what caused the noise. Leia then says a little more forcefully, “Let go, please.” He says, “Don’t get excited,” which prompts Leia to clap back. Han then finally lets go of her and, while sporting a devilish grin, offers a sarcastic apology that he doesn’t have time for them to do anything else.

Some may chalk this up to the will-they-or-won’t-they nature of their subplot, but c’mon. She clearly doesn’t want to be touched by the guy and even says so — twice. Han’s being creepier than that new emoji with its finger over its mouth, and that’s saying something.

All right, so maybe he had one questionable moment, you say. It’s not like there’s much more else, right? Roll the tape!

The scene above (between 2:09 and 2:32) is less damning than the “Shh” or him holding onto her after she asks him to let go, but Han still doesn’t come off great here. Whenever Leia says she’s not interested in him, Han’s response is pretty much always, “Yes, you are.” In the above clip, when Leia asks him to stick around because he’s a natural leader and an asset to the rebellion, Han dismisses all that and insists that the real reason is because she’s in love with him.

You might say, well, Han was right. Leia admits later in Empire that she is in love with him, and they are, after all, one of the most iconic romantic pairings in all of sci-fi, if not cinema at large. But look at what’s really happening in these scenes: Just because someone has a hunch that another person is interested doesn’t make it cool to badger that person or, worse, ignore them when they actively rebuff your advances.

And, anyway, the only real reason that Leia is in love with Han is because the story, envisioned by George Lucas and scripted by Lawrence Kasdan and Leigh Brackett, says she is; claiming they’re “meant for each other” doesn’t give Han a pass.

Maybe you think we’re being overly sensitive or reading too much into small moments. Before you cast judgment, at least consider the most cringeworthy and uncomfortable scene between Han and Leia in Empire: their first kiss.

No, you’re not imagining things, Han literally corners her. Pretend, for a second, that this isn’t an exchange between two beloved characters — just try and let go of any association to Star Wars, and really think about what happens in this scene and how it would seem in any other context.

A young woman is working on something in a dark corridor. A guy shows up and tries to flirt, and then starts rubbing her hand. She asks him to stop doing that, twice, and says her hands are dirty. He says his hands are dirty, too, and asks what she’s afraid of, because she’s trembling. She obviously doesn’t want to be kissed, because she’s put her back up against a wall. He leans in and kisses her anyway.

How are Star Wars fans supposed to interpret that kiss? Here’s what the official Star Wars site has to say:

After everything they’ve been through, and all the back and forth, there’s finally a moment where Leia lets her guard down and Han relaxes. Han and Leia’s first kiss, aboard the Millennium Falcon, is the perfect culmination of their dynamic up until that point. He’s funny (“My hands are dirty.” “My hands are dirty, too. What are you afraid of?”), she’s keeping him at a distance, and finally, they meet in the middle.

But do they meet in the middle? Even though it appears like she’s kissing him back, Leia doesn’t really have anywhere else to go. She also tells him to stop twice before they kiss, and Han himself notes that she’s trembling — he just wants to believe it’s because she’s in love with him.

It’s undeniable that Empire Strikes Back is a great and important movie, and likely the best Star Wars movie. It’s when we first meet Yoda, when we learn that the Star Wars universe actually has black people in it (Hi, Lando) and when we hear the iconic “I am your father” line. All of that is fantastic. But it’s also clearer than ever that Han’s behavior is, at best, questionable when it comes to how he — a character that many boys have grown up idolizing — deals with women.

And he’s by no means the only roguish character who’s been canonized in spite of (or because) he’s a jerk or a cad. James Bond isn’t exactly known for his willingness to commit to the women in his life; Chris Pine’s James T. Kirk is made out to be a ladykiller in the 2009 reboot of Star Trek helmed by J.J. Abrams (who went on to direct The Force Awakens). Han’s an archetype: a swashbuckling space pirate who’s cocky and pushy and a scoundrel, but we’re supposed to love him anyway, because he’s opposed to space tyrants and because Leia loves him.

But let’s give credit where credit is due — Star Wars has clearly evolved with the times. The franchise now features a more diverse cast of characters and has a woman at the center of the story. Some balance has been brought to the Force.