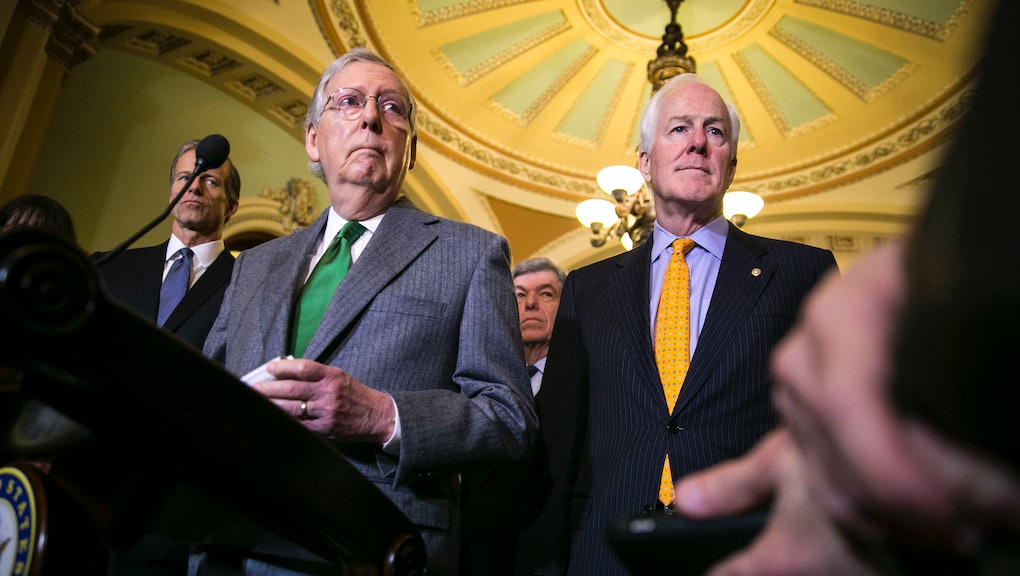 On Thursday, the Senate confirmed its 12th judge to the U.S. Court of Appeals — the most in any year since the system was created in 1891. Jimmy Carter was the last president, in 1977, to have 10 or more nominees confirmed in a year.

That means President Donald Trump and Senate Republicans have changed a relatively large number of judgeships in the U.S. that hear appeals of lower federal court decisions. There are 12 circuit courts, each with a three-judge panel. Trump has nominated 18 judges to appeals courts so far this year, meaning at least another six judges could be confirmed in short order.

That reshaping of the federal judiciary will be felt long after Trump and Sen. Mitch McConnell (R-Ky.) have left Washington. Only about 1% of cases appealed to the Supreme Court are allowed oral arguments by the justices. That means appeals court permanently decide far more federal cases than the more high-profile court, which continued to be conservative with the confirmation of Associate Justice Neil Gorsuch.

In 2016, Senate Republicans prevented dozens of Obama’s judicial nominees from being confirmed. Following Trump’s win, the GOP has seized the openings created by that delay to confirm judges with historic speed.

Only one of the judges is older than 55, Mic found. A few are in their mid-40s. That means these nominees will shape federal law for decades in their lifetime appointments.

It’s not that the judges aren’t needed. The Senate has confirmed 17 total federal judges below the Supreme Court in 2017. There are still 143 judicial vacancies, with 42 nominees pending.

But in their haste to confirm judges, Senate Republicans approved a circuit court judge who was unanimously deemed “not qualified” by the American Bar Association. Leonard Steven Grasz was the first judge who received that designation to be confirmed. He will now hear cases that affect seven Midwest states.

On Thursday, Sen. John Kennedy (R-La.) asked Petersen a series of questions to test his judicial preparedness. Petersen could not answer one of them. The Bar Association deemed him “qualified.”

Today’s question: How closely have you followed the GOP push to reshape the federal judiciary?

Net neutrality: The Federal Communications Commission voted Thursday to roll back open internet rules codified during the Obama administration that prevent companies from restricting the flow of data to and from websites. Mic’s James Dennin offers a detailed explanation of how that will affect your browsing experience and your wallet.

Tax reform: On Thursday, Sen. Marco Rubio (R-Fla.) announced he will not support the GOP tax bill if it is not changed to give poor and middle class Americans are larger child tax credit. Rubio wants to see the law tweaked so those who do not pay income tax, but still pay taxes to support Social Security, Medicare and Medicaid, can receive an increased tax credit.

Politico details how the tax legislation has changed as the House and Senate negotiated. One big difference: the bill dropped the change that would have allowed churches to engage in political activity.

John McCain: The Republican senator from Arizona, who has brain cancer, was hospitalized in Washington on Thursday. CNN reported McCain had stopped speaking in Senate Republican meetings and looked “increasingly frail.”

Trump profiting: Payments to Trump properties and companies have skyrocketed since Trump’s presidential campaign and his inauguration, OpenSecrets found. The president’s properties received $1 million so far this year, and $4.2 million during 2015 and 2016.

Paul Ryan’s future: The speaker of the House is reportedly considering retiring from the position (which he never really wanted in the first place) at the end of 2018, aiming to have passed the GOP tax plan and taken a shot at reforming entitlements.

DACA: Progressives threatened members of Congress on Thursday, indicating they will pull support in 2018 for Democrats who do not demand protection from deportation for DACA recipients is passed by Congress this year.

Five years after Newtown: NowThis produced a 19-minute video about the aftermath of the Sandy Hook elementary school shooting that left 20 young children, as well as six adult staff members, dead at the Connecticut school.

Another congressional retirement: Rep. Blake Farenthold (R-Texas) announced Thursday he will retire from Congress after reports said he ran a sexually charged office and settled a sexual harassment claim with taxpayer dollars.

Deep-dive into Alabama: Black women fueled a grassroots movement in Alabama to help get Democrat Doug Jones elected — and may remake state politics.

Tillerson vs. Trump: The president and Secretary of State Rex Tillerson continue to offer different views on how to deal with North Korea. Tillerson says the U.S. can negotiate with North Korea “without precondition.” The White House says the opposite.

This is a good day to watch this explainer on net neutrality if you haven’t yet. It will help you better grasp the significance of the FCC’s Thursday decision.