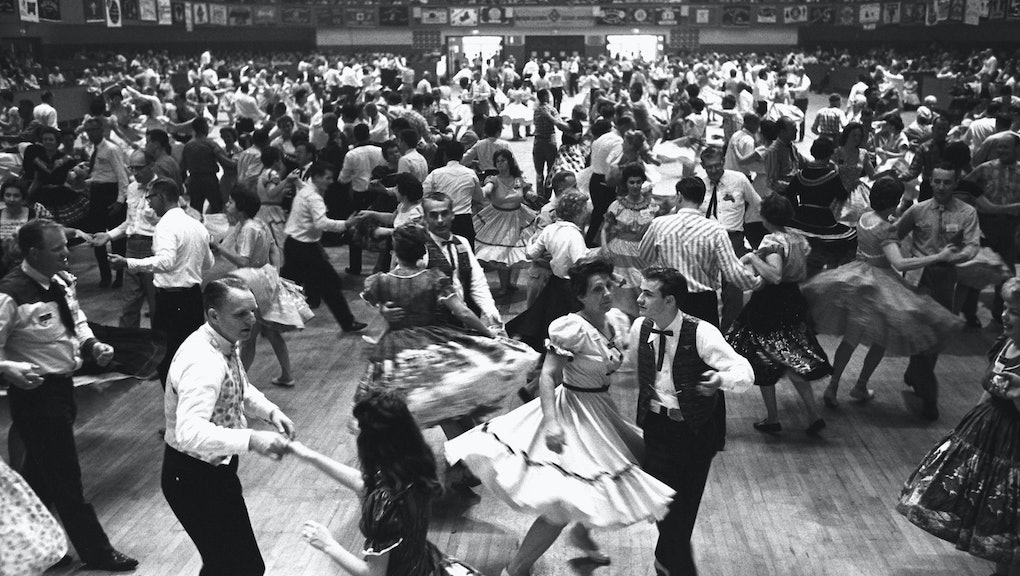 “Jazz is a Jewish creation,” automative tycoon Henry Ford wrote in his anti-Semitic publication, The International Jew. “The mush, slush, the sly suggestion, the abandoned sensuousness of sliding notes, are of Jewish origin.”

Ford had a solution: square dancing. He saw jazz and its related dancing styles as a force for moral decay, and sought to cure it by bringing back traditional folk dances. In doing so, Ford rewrote the cultural history of the dance form and set the stage for a pantheon of racist ideas that still animate modern white supremacist movements.

Most Americans rightly think of jazz as an African-American art form. But Ford, the only American personally praised by in Adolf Hitler in Mein Kampf, saw jazz dancing as part of a conspiracy to throw America into a dark age.

Ford sparked a national movement in the by pouring a small fortune into revitalizing square dancing in the 1920’s, decades after it was abandoned by American pop culture. He funded radio shows and dance clubs and invited hundreds of dance instructors to his home. Thirty-four colleges added “early American dancing” to their curricula.

Ford’s attempt to vitalize square dancing as a white supremacist project made headlines again in the last few weeks after Wonkette’s Robyn Pennacchia excavated it for her Twitter followers. Pennacchia was researching the history of state symbols when she realized that her state, Illinois, had an official state dance.

“Henry Ford thought that because jazz was getting all these people to go out and drink and smoke cigarettes and have sex, that replacing jazz with square dancing and old-time music and things he thought of as more white and more gentile would make people more moral again,” Pennacchia told Mic on Thursday. “Because he was creepy and racist and hated Jewish people.”

So where do Jewish people come into all of this? In The International Jew, Ford outlined a conspiracy wherein Jewish elites were attempting to re-engineer society to replace white protestants with a compliant black underclass. He wrote:

If the conditions in America continue to develop along the same lines as in the last generation, if the immigration statistics and the same proportion of births among all the nationalities remain the same, our imagination may picture the United States of 50 or 100 years hence as a land inhabited only by Slaves, Negroes and Jews, wherein the Jew will naturally occupy the position of economic leadership.

If that sounds absurd, consider that this is still popular theory with modern white supremacists, who’ve held rallies in Tennessee and Charlottesville, Virginia, where a popular chant was “Jews will not replace us!”

Ford was a great innovator of racist ideologies that are popular today. The perceived demographic threat to white Protestants outlined above is still trotted out regularly by the far right in describing Europe’s refugee crisis. He also was an early articulator of the theory that African-Americans only vote for Democrats in order to expand the welfare state.

The ultimate irony, of course, is that square dancing isn’t a lily-white style of dance at all. It was largely invented by slaves, who used the “swing your partner do-si-do” call-and-response technique to do away with the need for a dance instructor. White people found all of that shouting vulgar, until they’d fully adopted the dance style themselves. It’s a story of appropriation that’s repeated every generation since with blues, rock, rap and countless other black innovations.

In an attempt to cure the United States of an alleged plague of immoral music, Ford re-enacted the same trope used by white supremacists throughout world history: Selling a vision of a racially homogenous future using a fable about an America that never existed.