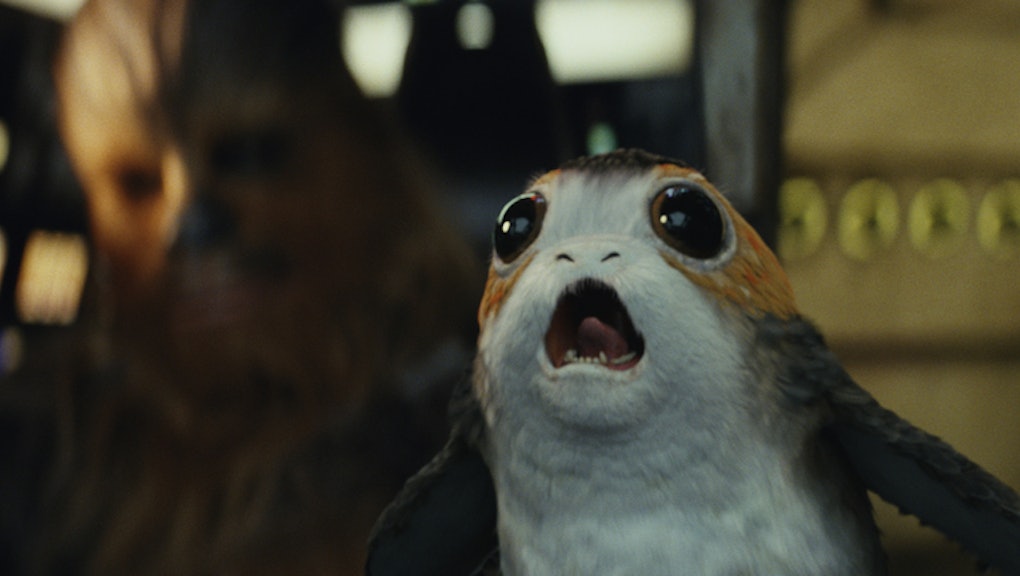 ‘Star Wars: The Last Jedi’ embraces a new element for the series: a social conscience

Star Wars: The Last Jedi has finally arrived and even the most esteemed film critics agree: The force is strong with this one.

It’s not a spoiler to say that this movie delivers on the hype that’s been building since 2015’s The Force Awakens revived the iconic franchise in the wake of the reviled prequels.

But unlike past installments in the series, which focus more on world-building and broad statements about good and evil, Jedi director Rian Johnson uses his vehicle to criticize issues in our world.

(Warning: There will be spoilers from now on. You have been warned.)

Something tells us The Last Jedi is PETA’s favorite Star Wars movie.

Early in the film, Chewbacca reminds us that animals are friends, not food. Just as he’s about to chow down on a cooked bird, a family of porgs and porglets flash him “puppy-dog eyes” in the hopes that he’ll stop. It’s a gag in a film surprisingly filled with gags, sure, but it can also be read as a subtle reminder that we shouldn’t kill defenseless creatures — even if a group of porgs is officially classified as a murder.

We also meet the fathiers — space horses raised in captivity, tortured and raced for sport. It isn’t long after we encounter these animals that Johnson brings us in for a closer look, revealing cuts along their back and necks. The film seems to suggest that the abuse produces faster, or at least more compliant, fathiers.

The creatures are eventually freed from the clutches of the wealthy denizens of Canto Bight. But their abuse isn’t the only shady business from which the planet’s 1% profits — more on that a little later.

When Leia Organa (played by the late, great Carrie Fisher) is forced to step down from her position as leader of the Resistance for explosion-related reasons, Oscar Isaac’s Poe Dameron is stoked: The hotshot pilot thinks, based on literally nothing except an inflated sense of self-worth, that he’ll be the one leading the ship. It’s a strange conclusion, given that he was just demoted after disobeying Leia’s orders and getting tons of Resistance fighters killed.

Reality bursts his bubble pretty quickly: Thanks to the cause’s pretty clear hierarchy, Laura Dern’s character, Vice Admiral Amilyn Holdo, takes Leia’s place. An incredulous Poe is shocked that she’s a war hero, and is uninterested in taking any orders from her. When her plan fails to meet his standard for moxie, he stages a mutiny,

Many have noted that the Holdo versus Poe dynamic is a real one: When a woman assumes a position of leadership in the workplace, not all men fall in line. The movie teaches a lesson in all of that. We won’t get into the knitty-gritty details of the plot, but suffice to say that were it not for Poe’s rebellion, the Resistance soldiers likely would have shaken the First Order and escaped in (all but) one piece.

The lucrative business of war

It’s easy to focus on the space explosions and lightsaber battles of the Star Wars franchise, but rarely do fans ever think about who in this universe is making money off of all this conflict.

Canto Bight is depicted as a sort of vacation in paradise for the galaxy’s richest. While Finn is initially seduced by the wealth of the city, Rose, an engineer for the Resistance, reminds Finn to consider how they made so much money. The answer is via what must be the most profitable business in the galaxy: war. After all, war is certainly profitable for some in real life, too.

Considering the Empire and the Republic in Star Wars have been at war for decades now, selling weapons and equipment has to come with quite the payout. After all, it isn’t just the bad guys that are spending their money on arsenals.

The hacker that Finn and Rose meet, played by Benicio Del Toro, reveals to Finn that it’s not just the First Order deepening the pockets of these arms dealers. When the Resistance isn’t busy using the hyperdrive to T-bone enemy ships, they’re fighting the First Order’s laser blasts with their own.

The real world connections draw themselves.