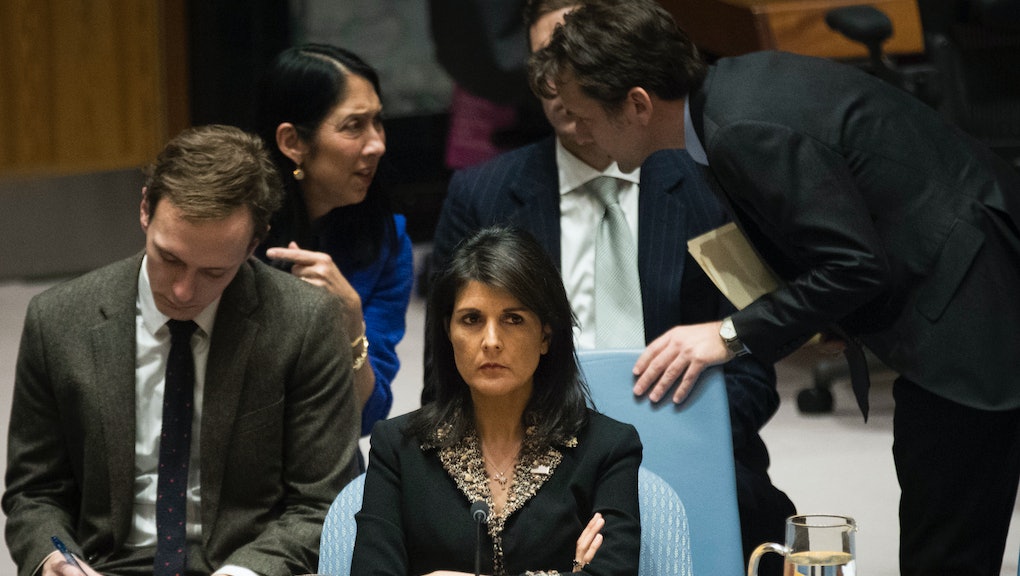 The United Nations Security Council voted Monday on a draft resolution aimed at reversing President Donald Trump’s controversial decision to move the United States Embassy in Israel from Tel Aviv to Jerusalem. The text of the resolution expressed “deep regret at recent decisions concerning the status of Jerusalem.”

Though 14 of the 15 members of the Security Council voted in favor of the resolution, it was struck down by a U.S. veto.

“We do it with no joy, but we do it with no reluctance,” U.S. Ambassador to the U.N. Nikki Haley said following the vote, as quoted by Reuters. “The fact that this veto is being done in defense of American sovereignty and in defense of America’s role in the Middle East peace process is not a source of embarrassment for us; it should be an embarrassment to the remainder of the Security Council.

“What we witnessed here in the Security Council is an insult. It won’t be forgotten,” Haley added.

Though the Security Council resolution, which was drafted by Egypt, never explicitly mentioned the U.S. by name, it took aim at Trump’s decision by affirming “that any decisions and actions which purport to have altered the character, status or demographic composition of the Holy City of Jerusalem have no legal effect, are null and void and must be rescinded in compliance with relevant resolutions of the Security Council.”

Haley’s decision to veto the vote marks the first time in more than six years the U.S. has exercised its veto in the Security Council, Reuters noted.

Trump’s recognition of Jerusalem as the Israeli capital has sparked criticism from leaders around the world, including key Western allies like the United Kingdom, France and Germany. The decision is regarded as being a slight to the Arab world and detrimental to the peace process between Israel and Palestine. It has also been criticized as a threat to counter-terrorism efforts.

“In the wake of the decision of the United States ... the situation has become more tense with an increase in incidents, notably rockets fired from Gaza and clashes between Palestinians and Israeli security forces,” U.N. Middle East peace envoy Nickolay Mladenov told the Security Council ahead of the vote, according to Reuters.

Israeli Prime Minister Benjamin Netanyahu thanked Haley for her veto in a video posted to Facebook after the vote.

“Thank you, ambassador Haley,” Netanyahu said. “On Hanukkah, you spoke like a Maccabee. You lit a candle of truth to dispel the darkness. One defeated the many; truth defeated lies. Thank you President Trump, thank you Nikki Haley.”

The Palestinians, meanwhile, have denounced the veto as a “provocation” and are planning to take further action. Palestinian foreign minister Riyad al-Malki said that the country would seek support in the U.N.’s General Assembly — where countries cannot exercise a veto — if Haley vetoed the decision, according to South Africa’s Sunday Times. The General Assembly is expected to discuss the Palestinian people’s right to self-determination during a session on Tuesday. Currently, the country is recognized in the U.N. as a “non-member observer state,” the Washington Post noted.

Palestinian President Mahmoud Abbas also said Monday that the country would no longer accept the U.S. as a Mideast mediator, adding that “a crazy person wouldn’t accept” Washington in the role after Trump’s decision, according to the Post.