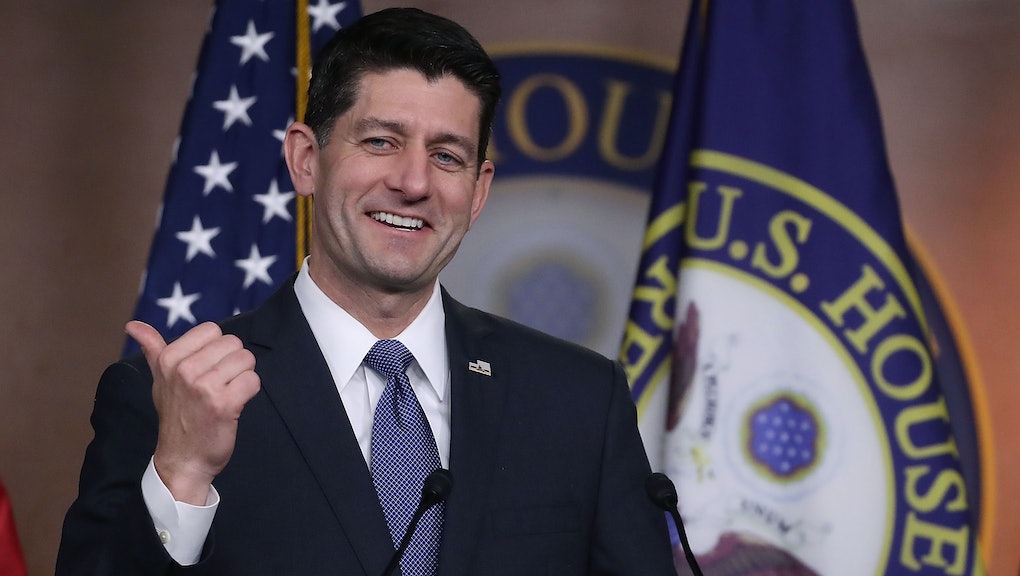 With unpopular tax bill, experts say GOP has learned nothing from Obamacare missteps

It’s déjà vu all over again for Republicans, who, over the past weeks, have sought to convince themselves that the unpopular tax bill they’re set to pass won’t sink their electoral hopes in the 2018 midterm elections.

“No concerns whatsoever,” House Speaker Paul Ryan told reporters Monday when asked whether he was concerned that the tax plan, currently opposed by more than half of voters, could hurt the GOP next November.

“When we get this done, when people see the withholding improving, when they see the jobs occurring, when they see bigger paychecks, a fairer tax system, a simpler tax code, that’s what’s going to produce the results,” Ryan said. “Results are going to make this popular.”

Ryan sounds a lot like Democrats in 2010 when they passed the Affordable Care Act, better known now as Obamacare.

The ACA was deeply unpopular seven years ago, with a 59% disapproval rating, when Democrats passed the bill in March 2010. Yet Democrats also fed the same line: Once Americans saw the benefits of the law, its popularity would improve and their party would be rewarded by voters.

That didn’t quite happen.

In fact, Democrats were crushed by a wave of electoral losses just months later in 2010, wiping out their House majority. Four years later, in 2014, the ACA helped sink Democrats yet again, costing the party its Senate majority.

“It must be the inherent nature of politicians to believe what they want to believe, and to ignore earlier comparable situations that they should have, could have, might have learned from,” Stu Rothenberg, a non-partisan political analyst, said of the Republicans who are dismissing the potential problems this tax bill may cause the party.

“It must be the inherent nature of politicians to believe what they want to believe, and to ignore earlier comparable situations that they should have, could have, might have learned from.”

“I heard the exact same thing from Democrats on Obamacare,” Rothenberg said of the argument that voters will grow to like the plan once they see its benefits.

And given the GOP’s general unpopularity, Rothenberg believes it’s hard to see how any of this tax plan can be sold to the public.

“The party is unpopular, the president is unpopular — that’s part of the problem,” Rothenberg said. “When you have people who are unpopular promoting a party’s agenda, it’s not surprising their agenda is also viewed negatively.”

Mark Mellman, a Democratic pollster, told Mic on Tuesday that Republicans’ argument that they have to pass an unpopular bill in order to improve their midterm election hopes is “the triumph of hope over evidence and experience.”

“They have this bizarre notion that if you just pass things that people hate, they’ll be grateful that you did something. And there’s really no evidence to support that,” Mellman said.

“They have this bizarre notion that if you just pass things that people hate, they’ll be grateful that you did something. And there’s really no evidence to support that.”

In fact, Democrats told Mic they see “scary” similarities between signs of the wave of losses that Democrats saw in 2010, to the indicators Republicans are currently ignoring.

The similarities here are numerous: Democrats saw heavy backlash from Republican voters against the ACA, similar to the backlash Republicans have seen on their own health care efforts. And Democrats also lost a Senate seat in the deep blue state of Massachusetts to Scott Brown — similar to how Republicans just lost a Senate seat in deep red Alabama to Doug Jones. And Democrats had passed a tax cut in the stimulus package in 2009, but voters did not reward Democrats the next year in the midterms.

“What this tells me is that if you’re a Republican strategist and you’re not sort of sensing that all of this looks eerily similar, then you probably shouldn’t be in the business,” said a former DCCC and Democratic leadership aide during the 2010 cycle, who asked to remain anonymous to protect his job.

Mellman added that throughout the 2018 election cycle, Democrats are likely to run ads tying Republicans to the unpopular tax plan. He believes these will point out that the GOP tax bill raises taxes on the middle class and increases insurance premiums — all to give tax cuts to corporations and the wealthy.

“We’ve gone through this argument many many times and it always works to our benefit,” Mellman said of that argument. “It never works to theirs.”