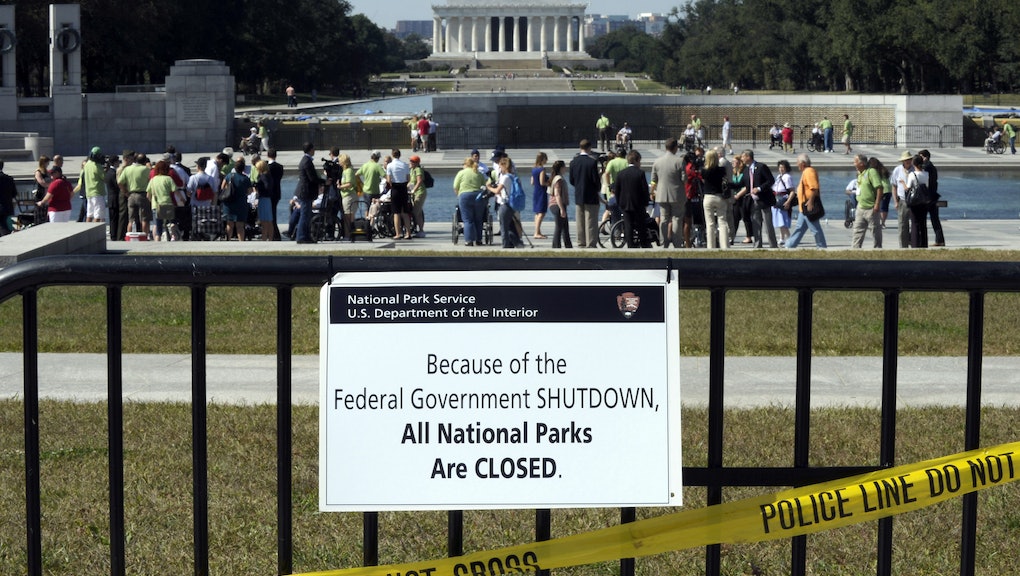 With a government shutdown looming, here’s a reminder that we’ve been here before — 18 times

A government shutdown could be imminent, as legislators in Congress battle over a spending bill that must be voted on by Friday at midnight.

The spending bill is currently a source of contention between the House and Senate, as the House attempts to attach a full-year defense spending bill that Senate Democrats are likely to reject without a separate deal for domestic programs. The Senate, meanwhile, is expected to add heath insurer subsidies to the spending bill in exchange for Sen. Susan Collins’ vote on the Republican tax reform bill — a move that House Republicans aren’t prepared to accept.

If legislators can’t agree on a spending bill by Friday, there could be a government shutdown — though it wouldn’t be the first time. There have been 18 government shutdowns in some form since 1976, after Congress first reasserted its authority over the budget through the 1974 Congressional Budget and Impoundment Control Act, which established the Congressional Budget Office and the House and Senate budget committees.

Government shutdowns as we know them today, however, did not really start until the Jimmy Carter administration in 1980, when then-U.S. Attorney General Benjamin Civiletti issued a legal opinion that interpreted the 1884 Antideficiency Act to mean that the government must cease operations if Congress hasn’t passed legislation that pays for it.

Prior to that, the Guardian noted, the government would just keep going even when Congress didn’t pass an appropriations bill on time — sometimes leaving federal agencies without a budget for a full year. Now, however, Congress’ potential failure to pass a bill could soon force the temporary closure of national parks, museums and numerous government services and agencies.

Here are the past times the government has shut down over budgetary disputes.

The government dealt with its first partial shutdown in 1976 during Gerald Ford’s presidency, when Ford vetoed a spending bill passed by the Democrat-controlled Congress for the Department of Labor and the Department of Health, Education and Welfare on Sept. 29. Though Congress overrode his veto two days later, the funding gap lasted until Oct. 11, when a continuing resolution on funding for other government sectors became law, the Washington Post noted.

Congress faced a series of three consecutive shutdowns in 1977 under President Jimmy Carter, as the Democrat-controlled Congress battled over federal funding for abortion, which was tied to the spending bill for Labor and HEW. The House wanted to continue a ban on the use of Medicaid to fund abortions unless the mother’s life is at risk, while the Senate instead wanted to expand that to include cases of rape, incest and when it affected the mother’s health.

Though the government didn’t totally shut down, Labor and HEW experienced three funding gap periods as a result: First from Sept. 30 to Oct. 13, until the Medicaid ban was temporarily extended until Oct. 31; Oct. 31 to Nov. 9, when another temporary bill was signed; and finally from Nov. 30 to Dec. 9, when legislators finally allowed the exceptions for Medicaid funding to be expanded to include rape, incest and non-life threatening health risks for the mother.

Carter once again presided over a funding gap in 1978, which lasted for 18 days from Sept. 30 to Oct. 18. The then-president vetoed a defense spending bill, which included a $2 billion nuclear-powered aircraft carrier Carter did not want, along with a public works bill that included water projects to which Carter objected. New versions of both bills were ultimately passed. Congress also once again disagreed over abortion funding, though the previous agreement from 1977 was later agreed to.

Yet another funding gap took place in 1979, as the House and Senate faced a disagreement over raising pay for members of Congress and senior civil servants, as well as another disagreement over abortion. In the end, the House got the pay increases that they desired, while the Senate was able to hang on to the expanded exceptions for Medicaid abortion funding, with the exception of non-life threatening cases for the mother’s health.

The first true government shutdown took place under President Ronald Reagan in 1981, after the president vetoed an emergency spending bill passed by Congress on Nov. 20. The shutdown ended soon after on Nov. 23, however, as the government passed a short-term spending bill that would give them more time to negotiate.

The Washington Post noted at the time that the then-unprecedented shutdown was only really in effect for one day, writing: “It was like a bad play that opens one day and closes the next — only in reverse.”

Another quick shutdown took place in the fall of 1982, as Congress couldn’t reach an agreement in time — and decided to prioritize their social engagements instead. The New York Times reported at the time that some government services would be shut down on Oct. 1 after an agreement wasn’t reached on Sept. 30, and the shutdown ended on Oct. 2.

“Congressional leaders barred a late-night session because of major social events tonight by both Republicans and Democrats,” the New York Times noted in 1982. “President Reagan invited all members of Congress to a barbecue at the White House, while Democrats were having a $1,000-a-plate fund-raising dinner.”

A few months later, a three-day shutdown took place from Dec. 17-21, when the House clashed with Reagan over a public works bill, which the House wanted and Reagan didn’t, and the funding of the MX missile program Reagan championed. Neither of the efforts got funded in the final spending legislation.

The MX missile program was again a source of contention in November 1983, as disputes over that, as well as increased education funding, prompted another three-day government shutdown. The issue was resolved as the Democrat-controlled House agreed to fund the missile program and decreased their education spending request, though the bill kept foreign aid cuts Reagan had opposed.

Another two quick shutdowns took place in 1984, as Reagan and Congress battled over a crime bill that Reagan wanted and a water package he opposed, along with Congress’ desire to overturn a measure weakening civil rights requirements for colleges receiving federal funds. After an initial three-day extension ended the first shutdown — which took place from Sept. 30 to Oct. 3 — a second shutdown took place when the extension expired.

The second shutdown lasted for just one day, and the New York Times noted in 1995 that 500,000 federal employees were only sent home at midday. Yet even the short shutdowns still come with a price, as furloughs from the day-long shutdown cost taxpayers an estimated $65 million.

Reagan and Congress spurred another one-day shutdown in Oct. 1986, as Reagan and Senate Republicans clashed with the Democrat-controlled House over such issues as labor contracts and welfare expansion. Democrats had to give up a number of concessions but secured a vote on welfare expansions in the final agreement. In the meantime, the one-day shutdown caused a half-day furlough for nonessential workers that cost taxpayers approximately $62 million, according to the Times.

The next year saw another one-day shutdown, this time over funding for the Nicaraguan “Contra” militants, an anti-Communist insurgent group who Reagan once described as “the moral equivalent of the Founding Fathers.” Diversion of funds to the group had previously caused the Iran-Contra Affair earlier in Reagan’s presidency. The two sides also clashed as Democrats wanted to restore the “Fairness Doctrine” mandating broadcasters to give equal time to both political sides. A deal was eventually worked out for aid to the Contra militants, although the Fairness Doctrine was not reinstated.

Only one government shutdown took place during George H.W. Bush’s presidency in Oct. 1990, after the president vetoed a stopgap spending bill because it didn’t have a deficit reduction plan. The three-day halt took place over Columbus Day weekend, meaning that while national parks and other historic sites were closed, most federal workers were not furloughed, as Bush and Congress resolved their dispute before dawn the following Tuesday.

Two more shutdowns took place during Bill Clinton’s presidency, as he clashed with then-Speaker of the House Newt Gingrich over a proposed budget that included domestic spending cuts and raised Medicare premiums. An initial five-day shutdown from Nov. 14-19, 1995, closed all non-essential government services, until a temporary agreement was reached. Once that temporary agreement expired, however, the government was shut down again from Dec. 16, 1995, to Jan. 6, 1996. The two sides eventually agreed on a budget that included more modest cuts and a plan to balance the budget within seven years.

One of the consequences of the shutdown, the Guardian noted, is that unpaid interns took over duties previously performed by now-furloughed staff. This included Monica Lewinsky, whose brief affair with Clinton began during the shutdown.

The most recent government shutdown took place in 2013, as House Republicans clashed with the Democrat-controlled Senate and then-President Barack Obama over their insistence on defunding the Affordable Care Act. The 16-day shutdown, which lasted from Oct. 1 to Oct. 17, put nearly 800,000 federal employees temporarily out of work; disrupted veterans’ benefits; closed national parks and other federally owned sites; and ultimately cost the country $24 billion —$1.5 billion each day — according to an estimate by Standards & Poor’s.