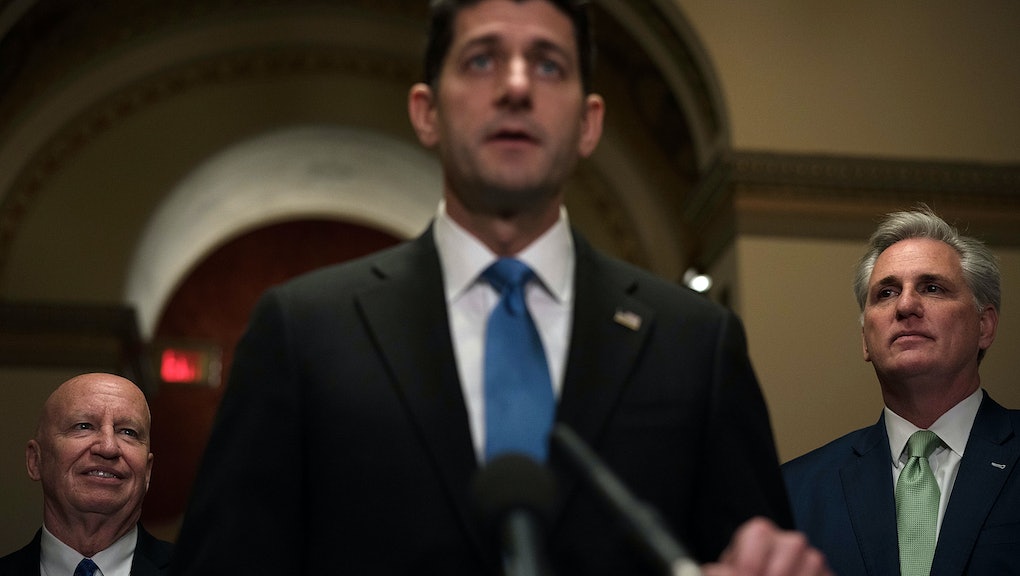 With tax reform in the rearview, Republican are set to resume infighting

Now that congressional Republicans have passed their massive tax overhaul, they’re ready to go back to doing what they do best: squabbling among themselves.

With a potential government shutdown looming, members of Congress are scrambling to put together a budget deal by Friday that will fund the government into the new year. But they remain divided on several key provisions.

Sen. Lamar Alexander (R-La.), chair of the the Senate Committee on Health, Education, Labor and Pensions, has insisted any budget must include a bipartisan measure to fund subsidies to insurance companies, which are designed to help reduce the cost of health care in the Affordable Care Act’s individual market exchanges.

But Republicans in the House oppose the measure, setting the two chambers up for a standoff.

And at least one conservative House member, Rep. Carlos Curbelo (R-Fla.), has vowed to oppose any budget deal that doesn’t include a permanent solution for Deferred Action for Childhood Arrivals recipients — young undocumented people who risk losing their protected status in March.

A series of competing DACA proposals in the Senate have revealed fundamental disagreements between Republicans with regard to how the issue gets solved.

Meanwhile, Republicans have yet to reach a consensus on whether to provide critical funding for the Children’s Health Insurance Program, without which many states will be unable to accept new enrollees in the program in 2018.

A desperately needed relief package for states and territories devastated by hurricane and wildfire damage has also been separated from the overall budget bill, a move that is sure to anger officials from affected states.

Republicans have until midnight Friday to come to consensus on these issues and avoid a government shutdown — meaning any Republican celebration over passage of the tax bill will likely be short-lived.