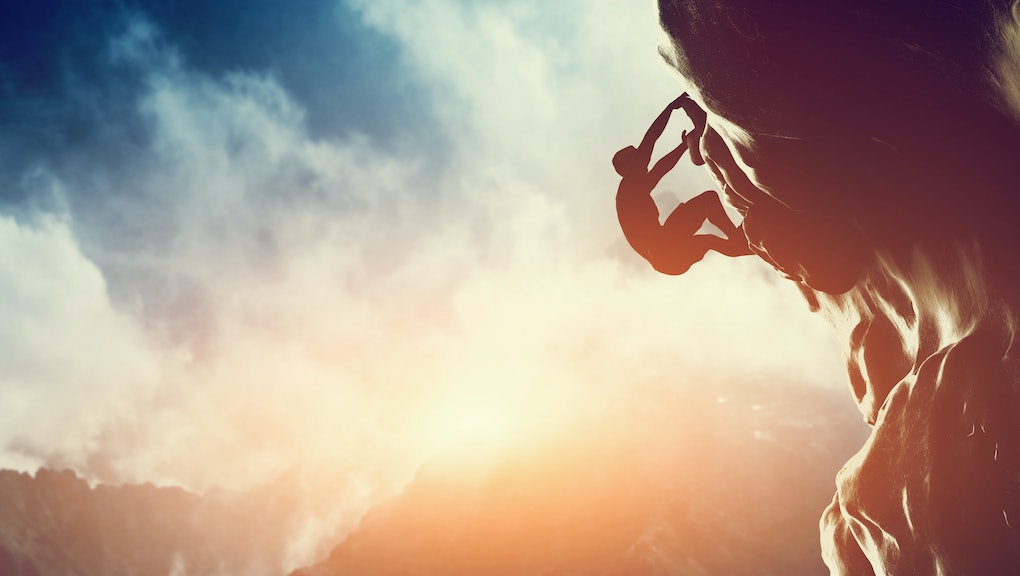 If you picture the typical high-achiever, a number of stereotypes probably come to mind. Not only were they on call for New Year’s Eve, they gloated about it. They’ve got a list of resolutions that’s a mile long. And while you’re nursing your hangover, they’re doing a fun run.

The reality of what truly signals success, of course, is a little more nuanced. For one, studies suggest that the more ambitious your New Year’s resolutions are, the more likely they are to fall by the wayside.

And the idea that bigger is always better is just one way of several ways people misunderstand the role that motivation plays in our success, said Jeff Haden, author of the upcoming The Motivation Myth: How High Achievers Really Set Themselves Up to Win, in a phone interview. In a recent LinkedIn post, Haden wrote that more self-made millionaires actually reported being C students than those who said they earned As.

And another myth about success, Haden said, is that motivated people are born that way: “You can create motivation yourself by creating a plan,” Haden said. “You need to let yourself feel good about small wins; that will give you tiny bits of motivation. It’s the distance between here and there that can be demotivating.” Indeed, research suggests one’s drive to succeed changes over time, particularly as we advance toward our goals. Here are three of the most prevailing myths about successful people — and how you can tap into your best self in 2018.

Entrepreneurs are often exhorted to be single-minded about the problem they’re trying to solve: “I feel like I’m not doing my job if I spend any of my energy on things that are silly or frivolous about my life,” Facebook CEO Mark Zuckerberg said at a Q&A in 2014, as quoted by Entrepreneur. “I can dedicate all my energy into building the best products and services.”

That approach obviously works for some, but Haden said it can also be constricting. He pointed to tennis champion Venus Williams, whose achievements span from athleticism into design, education and entrepreneurship, as an example of the advantages of being open to new things.

“Venus Williams never talks about this lightning bolt where she gets her life purpose. She just says ‘I’m interested in that, I’m going to explore that,’” Haden said. “There’s this idea that if you switch paths, you wasted the time you spent on that previous thing, but your path doesn’t seem clear until you look back and connect the dots.”

Indeed, trying new things isn’t just good for the resume. It may actually make you smarter: One recent study found that people who engage in different tasks throughout the day display more creative problem-solving skills. Neurologists think this is because the brain likes it when you try new things — or, perhaps conversely, because the brain gets sluggish when you do the same thing for too long.

What’s the solution? While it’s important to have goals, Haden said you’ll have an easier time staying motivated when the goals are more attainable and flexible. So, if you’re trying to get into shape, ask a friend to run with you a couple times a month versus signing up for a marathon right away.

“Some people get bored with being single-minded,” Haden said. “What I would say is common to most successful people is that very few of them spend much time thinking about that end point.”

When you picture the model of success, you probably picture someone with an imposing stature: assertive, brusk, tough. But that’s not always the case. In fact, there’s a growing body of evidence suggesting it’s actually so-called “betas” who make the best bosses.

Why is that? Part of it has to do with their employees’ health: Workers who are repeatedly exposed to aggressive and uncivil behavior have a higher risk of all sorts of ailments, ranging from cardiovascular problems to ulcers. Health-related work losses cost employers more than $260 billion a year.

But the real reason why type Bs make better bosses may have more to do with their listening skills. An interesting experiment from a Wharton School professor assigned two groups the task of folding T-shirts. Each group had one leader — either an extrovert or introvert — and four followers; two of the followers were actually research assistants.

After 90 seconds, the research assistants interrupted their groups with suggestions of how the process of folding shirts could be improved. The extroverted leaders found this to be a threat; the introverted leaders, by contrast, listened to the advice and were able to improve their group’s performance. The workers also reported feeling happier for having been heard.

3. Breaks are for the weak

Former Ticketmaster CEO Nathan Hubbard drew the wrath of the internet on Monday when he encouraged people to spend the holiday season working: “Whatever you’re hustling for, take note: Most people/companies are shut down until [2018]. That means you get [two] extra weeks to outwork your competition,” Hubbard tweeted, before conceding in a second tweet that he would spend the holidays with his family in Hawaii. “These [two] weeks are a gift. Get to work.”

The truth is your hustle may be better served by taking the time off, especially if you need it: In one recent study, employers cited all sorts of benefits from employees taking breaks, from boosted morale and reduced turnover to higher productivity.

So, if you’re still in the market for a New Year’s resolution you’re actually going to keep, might we suggest taking more breaks in 2018? Whether it’s an actual vacation or a regularly occurring afternoon walk, research suggests you’ll not only feel better — you’ll work better, too.