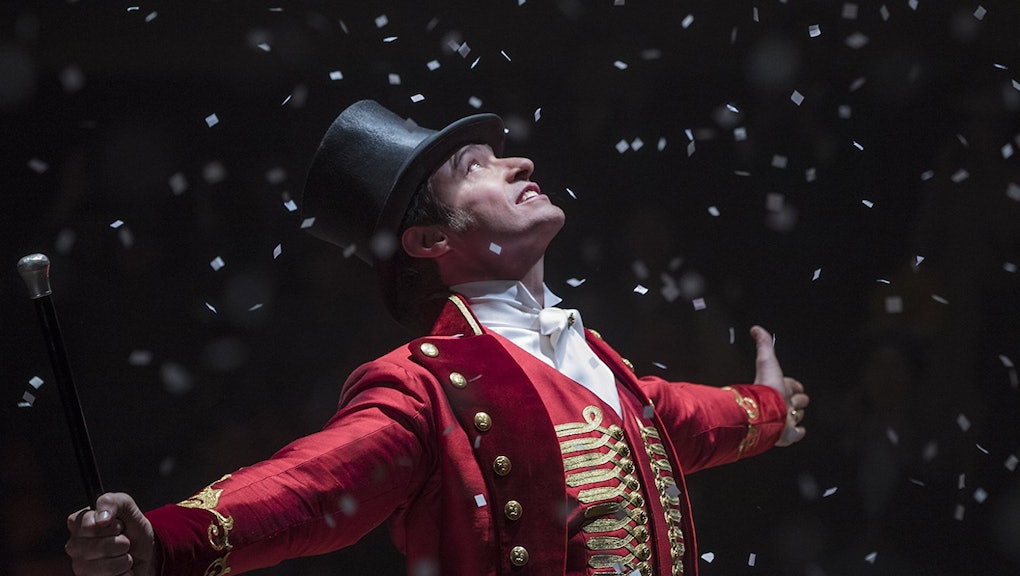 ‘The Greatest Showman’ is a hollow spectacle of performative wokeness

It was the high-flying P.T. Barnum who once said, “There’s a sucker born every minute.” Except that no, he didn’t — researchers have found no record whatsoever of the circus impresario having spoken this phrase, but many of the people invoking the quote have no idea of its apocryphal status. Maybe it was Barnum’s doing, maybe it wasn’t, but it feels like a testament to his skill as a swindler that such a prominent part of his legacy would be a fib.

Everything in Barnum’s life was bunkum and gimcrackery. There’s dissent as to whether he was the cad posterity has made him out to be, but deception was still the man’s stock-in-trade. He filled his famous circus with less-than-bona-fide “freaks” who were often people with physical deformities, gussied up with some showbiz smoke and mirrors. He pulled a fast one on his wife, according to the newspapers that crowed about his torrid affair with singer Jenny Lind. And in his new biopic, the big-shiny-happy new musical The Greatest Showman, the con is more insidious than ever.

Michael Gracey’s new film is a first-order bamboozle, bilking moviegoers out of the price of a ticket with a well-polished emotional shell game. Slightly disoriented viewers may walk out of the auditorium wondering what just happened, so smoothly goes this film’s fleecing. As sobriety creeps back in following the pizzazz bender, it’ll dawn on the viewer that the Hugh Jackman-played Barnum is not nearly as “woke” as he tacitly claims. His darling stars, the freaks he ostensibly awarded their dignity, end up mere accessories to a bland and platitudinous story about following your dreams.

Few films have pandered so directly to 13-year-old musical theater dorks, and with them, the 13-year-old musical theater dork inside all of us. Like La La Land, the last effort from this film’s songwriting team of Benj Pasek and Justin Paul, The Greatest Showman submits the glittery world of entertainment as a salvation from the soul-grinding drudgeries of small-town life and deadbeat jobs. The fantasy of hopping on the bus for Hollywood begins here, as Barnum creates a splendiferous refuge where anyone who believes in themselves can run away and be their best self.

This Barnum admired what the small-minded brutes of so-called “polite society” feared, extending emotional charity to a bearded lady with a turbo-charged set of pipes, a parkour-doing dog-faced boy and a gravelly voiced man with dwarfism. This Barnum dared to consider that being different made them special, not freaks. The film wants you to know it has a pure heart. Do not trust it.

Pasek and Paul’s compositions, which range in tone from “Imagine Dragons B-side” to “Mumford and Sons B-side,” aggressively reinforce this concept of absolute acceptance through upbeat fortune-cookie-isms. In the bombastic opening number, Barnum sings of a safe space “where the runaways are running the night” in between millennial whoops. In the bouncy “Come Alive,” he entreats the listener to “ride your light, let it burn so bright.” (I have a working theory that Pasek and Paul get a monetary kickback for every mixed metaphor in their lyric sheet.)

The definitive track is “This Is Me,” a fiery declaration of selfhood that goes out to anyone who’s ever felt like the world just couldn’t see their beauty. The bearded lady (Keala Settle, a nuclear-class belter) takes the lead, singing: “When the sharpest words wanna cut me down/ I’m gonna send a flood, gonna drown them out/ I am brave, I am proof/ I am who I’m meant to be: This is me!” It’s the kind of empowerment anthem a person could really get into after a bad breakup and a bottle of wine. Long stretches make not a lick of sense, but with all the whirling camera movements and flurries of cuts, it’s tough to tell until you’ve spent four hours poring over the full libretto.

Precious little of what The Greatest Showman says corresponds to what it truly does. For all its high-decibel crowing about the value of individuality and extending compassion to those cruelly deemed pariahs, the film demonstrates only a perfunctory interest in the people it claims to defend. Most of the acts Barnum corrals for his revue of oddities have no spoken lines, and the two who command the most screen time are the typically good-looking Zac Efron (as Barnum’s co-investor, with whom he shares sweltering homoerotic tension) and Zendaya (a steely acrobat whose distinguishing characteristic is that she’s black, a quality the film broadly equates with having a lady-beard).

Though he clearly belongs with Barnum, the Efron-played Carlyle romances the lovely acrobat, much to the chagrin of his racist parents. They get a Romeo and Juliet thing going, but the film never actually speaks to the element of racism keeping them apart. It’s all vagaries and pregnant silences — a pivotal moment leaves Zendaya mute. The script shies away from every opportunity to back up its lofty ideals.

One scene finds Barnum, having gained some cachet with the upper crust of old-timey New York society, turning his beloved performers away from a tony soirée. Stung, the bearded lady launches into “This Is Me” and the pals storm the party anyway, boldly stepping out before a judgmental public. The lesson is pretty transparent, and a sound one at that: Don’t abandon your weird theater friends just because the popular kids have taken a liking to you. But then the film turns around and does just that; the ensuing plot revolves entirely around Barnum’s personal journey to realize his aspirations and become a star, the two highest callings in Pasek and Paul’s world.

The bearded lady and her cohort are reduced to props, good for optics but with no real use to the film beyond tokenism. They’re around to cheer on Barnum when he valiantly saves the circus, but they’re not permitted to speak. (For a counterexample willing to put its empathy where its mouth is, consider the 1997 Broadway musical Side Show, in which Siamese twins and “cannibal kings” possess such human facets as goals and motivations.)

Paul Sparks holds the key. In The Greatest Showman, the actor portrays a malcontent drama critic from the same disreputable academy that accredited such mean spirits as Lindsay Duncan in Birdman and Bob Balaban in Lady in the Water. He spends the film dishing out pan after pan of the extravagant circus put up by Barnum, snootily dismissing the spectacle as a crass diversion for the commoners. But after protesters burn down Barnum’s circus for reasons never quite made clear, Sparks’ character has a change of heart. Surrounded by charred rubble, he consoles Barnum with the knowledge that while he may not respect the three-ring act as high art, some other critic may applaud him for providing a spotlight to people of all colors, shapes and sizes. The words “a celebration of humanity” are actually uttered.

This exchange represents screenwriters Bill Condon and Jenny Bicks’ transparent effort to insulate themselves from critiques they can already feel coming. If you find the movie to be implausible, silly or just dumb, then shrugging emoji to you — it never set out to be Palme d’Or material or anything. The Greatest Showman makes up what it lacks in being a good movie with magnanimity of the heart, the script assures us, and isn’t an elevation of the misfits marginalized by society what we need now more than ever?

Even if this were the case, that would be an unfair line of reasoning that forcibly lowers a collective standard for quality in art. But it’s not — The Greatest Showman is not the movie it deafeningly insists it is. Barnum was always a master huckster above all else, so perhaps it’s appropriate that what’s been billed as an inspirational salute to the outcasts is, in actuality, a disingenuous and deeply cynical exploitation of the radical-positivity ethic. It’s a hoodwink on an $84 million budget, a con on a scale that would make Barnum himself faint.