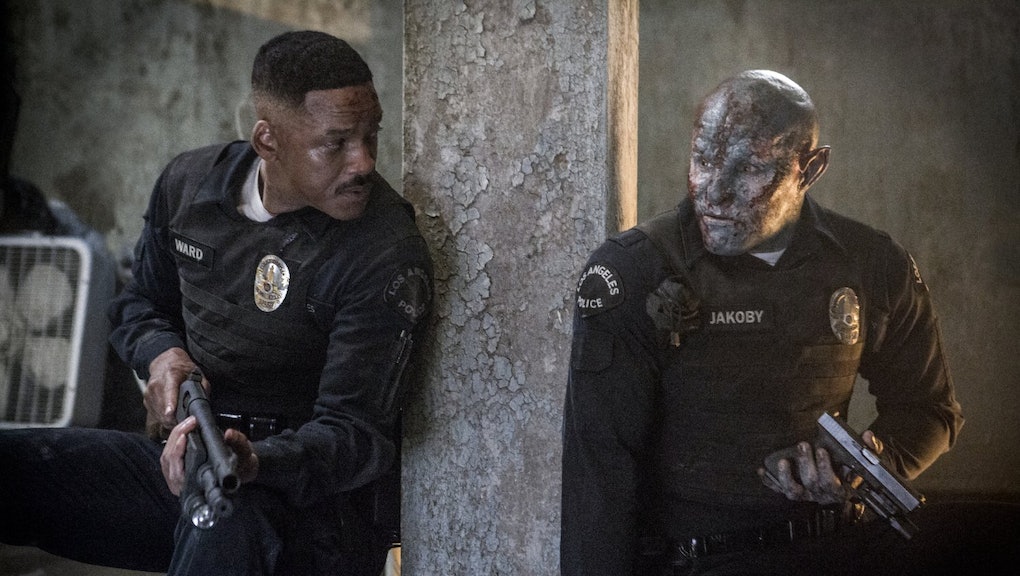 Yes, Netflix’s ‘Bright’ is as messy about race relations as you thought it’d be

Seconds into pressing play on director David Ayer’s Bright, Netflix’s “game-changing” fantasy epic-meets-buddy-cop feature starring Will Smith, audiences are tipped off for the level of humor and sophistication in store. Trigger Warning Entertainment, reads the title card, in a bit of an understatement. It doesn’t get much better from there.

People for whom that particular phrase continues to be a bountiful source of mirth — as if the very concept of being triggered is the height of comedy — will likely be delighted by the way the film handles the issues of race that serve as both the impetus for the plot and the backdrop around which its entire mythology revolves. In one of the more egregious examples of the line-crossing, edgy hilarity in play, Smith, a put-upon officer with the Los Angeles Police Department, is asked by his wife to take care of a fairy — yes, the mythical sort — that has gotten into their bird feeder like a pest.

“Fairy lives don’t matter today,” he quips before beating the tiny, winged creature to death. “You know I don’t fuck with fairies,” he tells his wife.

Max Landis, credited with the screenplay for the film, has already attempted to distance himself from that specific line, tweeting on Thursday, “I believe the ‘fairy lives don’t matter’ line was an ad lib by Will Smith, but I don’t know for sure.”

While that bit in particular, showcased in the trailer, drew plenty of criticism before the film debuted on Friday, it’s far from an outlier in terms of tone and its ham-fisted handling of race. That, in part, has some critics already calling it the worst movie of the year, an honor Ayers, who also directed 2016’s Suicide Squad, is not entirely unfamiliar with. Predictably, the exceptionally negative reaction from critics is already being used as the next salvo in our endless, idiotic culture wars, with people on Reddit and elsewhere concocting a conspiracy in which SJWs and critics are joining together to trash the film for… reasons.

It’s a shame, because the nugget of the conceit, a sort of mix of Alien Nation, Training Day (which Ayers wrote), Men in Black and Lord of the Rings is rife with potential for examining racial tensions in America. It’s set in a modern-day Los Angeles plagued with crime, but one where orcs, elves and humans — not to mention other fantastical and vaguely clever creature concepts, like a centaur cop — coexist. Playing an orc who’s also Smith’s partner on the force, Joel Edgerton brings a decent amount of pathos to the sort of role that you might expect to traditionally be embodied by an African-American police officer: He’s constantly at odds with his identity as an orc and as a police officer, and viewed with suspicion by his community because of it. The metaphors practically write themselves — or so you would think.

It’s a bad sign when you’ve got so many concentric layers of racism going on that a viewer starts getting thrown off by plotholes in the racism canon.

Instead, the film squanders it all on cheap stereotypes and a mostly boorish slog through one buddy-cop and fantasy-quest trope after another: the tense early-getting-to-know-you drives, the near-death bonding-exercise escapes, the obligatory dystopian punk-rock-club setting. The only thing that really rings true about the ordeal is that in a world where dragons and magic elves exist, the LAPD are still corrupt and racist. An above-the-board police department is apparently too far-fetched for even fantasy.

A series of lamppost plot explicators in the opening credits do much of the exposition. “In the beginning god created all races equal… but elves are more equal,” reads one piece. Wealth disparity is briefly alluded to, and the main villain, a deadly elf assassin, bears more than a passing resemblance to a certain first daughter.

But that exceptionally timely political thread is quickly abandoned. What we really need to know about the beautiful and rich 1%-er elves is that the only thing they love more than shopping is killing people with ninja moves. Acrobatic karate tends to have a way of pushing subtlety and nuance to the side. It would’ve been interesting to see more about how exactly the race of elves have concentrated most of the wealth. But we’re simply supposed to trust that that’s just how it is around here.

The orcs, for their part, are a confusing hybrid of racial stereotypes. “Orcs fight for you who fights for us” reads another bit of graffiti. Pity we didn’t diverge deeper into a culture where the poor but powerful orcs are enlisted to fight wars to protect the rich, and yet are still disrespected when they return home. But, no, we’re treated to jokes about how orcs don’t play basketball because they can’t jump.

It would be one thing if the racial analogies were at least well established and consistent, but they’re muddled at best. Are the orcs stand-ins for African-Americans, as they’re often portrayed in the film, or are they Latinos? Or are they urban white hardcore punk kids? Juggalos, perhaps? It sounds like a weird question to ask, and one that really shouldn’t matter, but the film forces you to think about it almost every other scene. Complicating things is that some of the worst stereotypes of all those groups are also present in the thinly sketched human characters. The only thing in Bright that’s scarier than the ninja elves are “homies,” and the frequency with which the term is used throughout the film.

Making things even weirder is that the humans, while almost exclusively racist against orcs themselves, are inconsistent in their racist characterization. Margaret Cho leads up a diverse staff of police, including an exceptionally orc-hating Latina woman officer, but a second Latino officer also brings up instances of Mexican bias among the human populace. It’s a bad sign when you’ve got so many concentric layers of racism going on that a viewer starts getting thrown off by plot holes in the racism canon.

Police brutality, particularly against minorities, is also briefly touched upon — one young orc tagger in a hoodie is allowed to run away because an orc cop realizes the humans are just looking for any excuse to kill someone who matches the description. That’s an interesting allusion. But it’s glossed over, and instead we’re given a handful of shootouts and some mystical gobbledygook about the dark lord, who the primary villain is trying to summon with a pool of magic… milk?

Smith has said it was the twist on the standard racial tropes of cop films that drew him to the script at first. The idea that he would play “a black police officer that’s racist against orcs.”

“To dive into that and to be able to look at society through that lens was exciting to me,” he said at the film’s recent premiere in LA. It is a fascinating idea! And a reversal of what we’ve come to expect from films like this.

To arrive at a more natural illustration of that, rather than a hammer-meet-nail version of it would take much more work that the writers seemed to put in here. Easier to rely on speeches like the one Smith gives to his daughter early on. “All of the races are different,” he says. “Just because they’re different doesn’t mean anybody is smarter, or dumber, or better or worse than anybody. Everybody’s just trying to get along and have a good life.”

We’re not so different after all, Smith and Edgerton realize toward the end, in what the film seems to put forward as the heart of its message. Another scene sums things up even better. The two are caught in a bathroom at one point, another piece of graffiti shown conspicuously in the background. “I love orcs,” someone has scrawled on the wall. “-Nobody,” someone adds as a kicker.