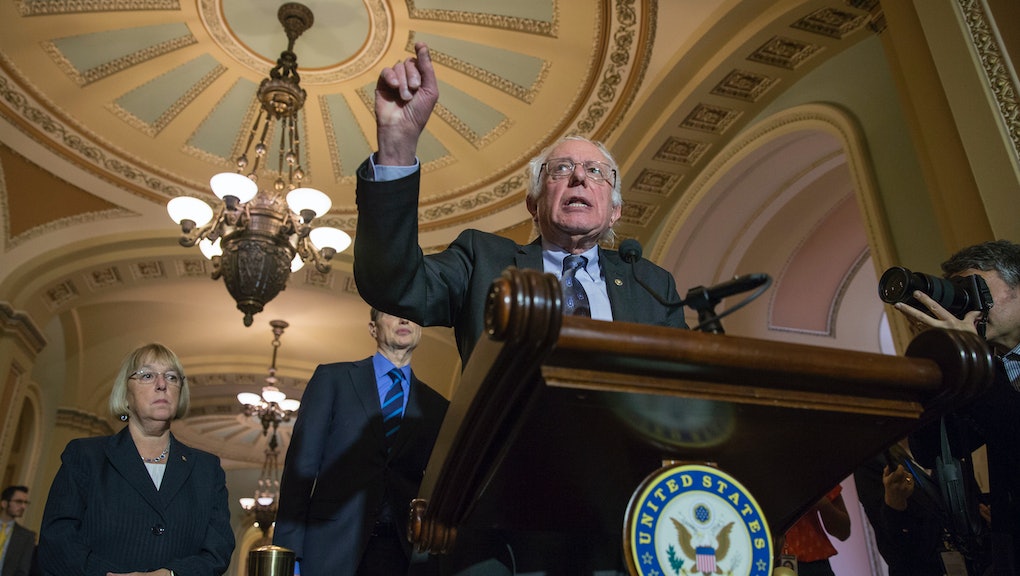 Sen. Bernie Sanders: “We need a revolution in the way we treat women.”

Sen. Bernie Sanders made waves during the 2016 Democratic Presidential Primary when he called for a “political revolution” — and now, the Independent senator from Vermont is calling for another revolution of a different sort.

In an interview Sunday on CNN’s State of the Union, Sanders called attention to the widespread problem of sexual misconduct against women in the workplace, calling for a “revolution” that goes beyond the allegations that have taken down Sen. Al Franken and other powerful men in the worlds of politics, media and entertainment.

“Look, Al Franken indicated that he was going to resign, and I think what Franken did touches on an issue of enormous consequence for this country,” Sanders said Sunday, when asked by host Jake Tapper if the senator, like some of his other Senate colleagues, now regrets calling for Franken’s resignation.

“And what I worry about, Jake, it’s not just what happens with regards to famous people ... right now, as we speak, in restaurants all over this country, in offices all over this country, there are folks who are not famous who are harassing women, making demands on women that are obscene,” Sanders continued. “We need a revolution in the way we treat women in the workforce from the bottom on up.”

The publication of allegations against Harvey Weinstein in October touched off a wave of women and men stepping forward with their own allegations in recent months, leading to the downfall of such powerful men as Matt Lauer, Kevin Spacey and Louis CK.

The #MeToo movement, in which women shared their own experiences of being sexually harassed or assaulted, helped to emphasize that the problem of sexual misconduct extends far past the country’s most influential men. Sanders’ call for a “revolution” seems to reflect the country’s current desire to take on the issue of sexual harassment; a poll conducted by SSRS Solutions from Dec. 14 to Dec. 17 found that 49% of Americans find sexual harassment to be a “very serious” problem in the country today, with 19% calling it an “extremely serious” problem.

One of the men who has remained largely unscathed despite the recent rise in sexual harassment allegations, however, is President Donald Trump, who remains in office despite being accused of sexual assault or other sexually violating behavior by nearly 20 women. Sanders has been one of several senators to call on the president to resign as a result of his behavior — a stance that he reiterated on Sunday.

“If Al Franken felt he acted inappropriately, you have a president who was on TV in a largely seen tape boasting about his assault of women,” Sanders said. “If Franken could resign, I think it would be appropriate for the president to do the same.”