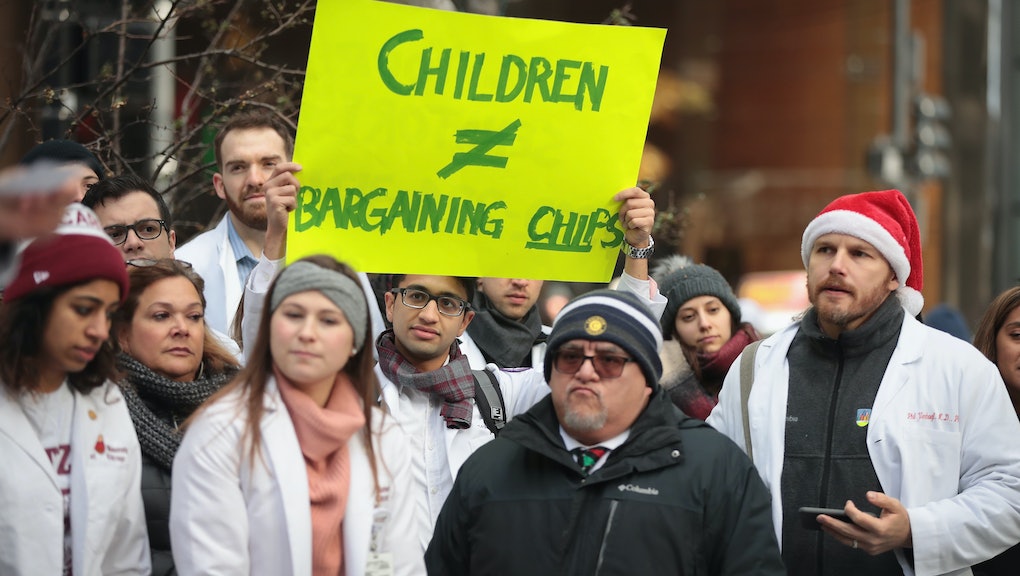 The current state of CHIP: What happens next as the children’s health program runs low on funds

Republicans in Congress spent their last weeks in session of the year focusing on tax reform — and their efforts, critics have argued, come at the expense of millions of American children’s health care.

The Children’s Health Insurance Program, which insures 9.2 million Americans as of 2016, has been without federal funding since it expired Sept. 30. Though some short-term funding has been able to cover it through the end of 2017, a number of states will soon run out of money if Congress can’t renew the health insurance program quickly.

First established in 1997, CHIP provides health insurance to children from working families who don’t qualify for Medicaid but are unable to afford health insurance on their own. The program also covers approximately 370,000 pregnant women each year in 18 states, according to the March of Dimes.

CHIP is a block grant program, PBS noted, meaning the federal government provides money to states to spend at their own discretion. Congress is expected to extend the program to continue providing these block grants — but it’s currently unclear when that will happen.

“We’re going to do CHIP. There’s no question about it in my mind,” Sen. Orrin Hatch (R-Utah), who initially helped create the program, said on the Senate floor in December. “It’s got to be done the right way. But the reason CHIP’s having trouble is because we don’t have money anymore.”

The health care program, CNN noted, costs approximately $16 billion per year — a fraction of the cost of the tax reform bill recently passed by Congress.

Though Congress passed short-term funding for CHIP on Dec. 21 as part of a spending bill that averted a federal shutdown, the program’s long-term outlook still remains unclear — and children covered by the health care program may soon face the consequences.

When will states run out of funding?

According to the Philadelphia Tribune, the short-term funding recently passed by Congress will fund the state programs through March, though some sources predict the funding could actually run out by early February.

The short-term legislation includes an additional $2.9 billion in funding for states to use on children’s health insurance. States can also use any unspent funds from 2017 to fund their 2018 coverage; the Medicaid and CHIP Payment and Access Commission noted in October that there was an estimated $4.1 billion in unspent 2017 funding available for spending in the 2018 fiscal year, which began in October.

Prior to the most recent funding bill, Congress had approved a previous “patch” to the program as part of a Continuing Resolution passed Dec. 7, a study conducted by the Georgetown University Health Policy Institute noted.

The new short-term influx of funding includes continued authorization to redirect state funds in addition to the $2.9 billion in federal funds, the Tribune noted. It is currently unclear what the timeline for individual states’ funding will be under the new plan.

According to projections published in October by MACPAC, 19 states were projected to run out of funding between April and June 2018, while two more states, Illinois and Wyoming, are expected to have their funds exhausted between July and September 2018. Whether these states will be able to extend their funding even further under the new short-term funding plans remains to be seen.

Though Congress’s newest influx of funding will likely help to mitigate the effects, states are already taking steps to prepare for their CHIP funding to run dry. Colorado and Virginia have already sent letters to families warning that their coverage may come to an end by the end of January, while Connecticut has announced that it will close is Husky B health program at the end of January due to the lack of funds.

Alabama had previously announced that it would close its program Feb. 1, but later reversed its decision in the wake of Congress’s temporary funding measure.

If funding runs out, the consequences for those covered by CHIP would depend on their state. States have established their CHIP programs in several ways, either setting it up as a separate program, in conjunction with a state’s Medicaid expansion or some combination of the two.

The 5.6 million children who are covered under Medicaid-expansion CHIP, MACPAC noted, will continued to be covered through Medicaid, as the Maintenance of Effort provision in the Affordable Care Act requires states to keep the same eligibility levels for those in Medicaid and CHIP through 2019. The move to Medicaid will come at a higher cost to states, however, as they will now receive a lower Medicaid match rate from the federal government for the coverage, according to the Kaiser Family Foundation.

Separate CHIP programs, on the other hand, are permitted to terminate coverage entirely if the federal funding runs out. The separate CHIP programs cover 3.7 million children, 1.2 million of whom are expected to become uninsured because other sources of health care coverage would be unaffordable, according to MACPAC.

The only states that currently rely solely on separate CHIP coverage, MACPAC reported in July, are Connecticut and Washington, though many other states combine separate coverage with Medicaid. According to the Georgetown study, the states with some sort of separate program that are running out of funds the fastest — leaving their children the most at risk of losing coverage — are New York, Pennsylvania, Florida, Georgia, California, Massachusetts, Virginia, Oregon, Colorado, Washington, Kansas, Nevada, Kentucky, Utah, Idaho, Connecticut, Delaware and Louisiana.

Though Congress’s promise to eventually renew the program means that any terminated coverage would likely only be temporary, it is still expected to have longstanding consequences on the affected children.

“There’s always damage done because families will hear the program is closed and then they won’t hear the program is opened,” Joan Alker, the director of Georgetown University Health Policy Institute’s Center for Children and Families, told PBS. “As soon as notices go out, we’re going to see kids go without coverage.”