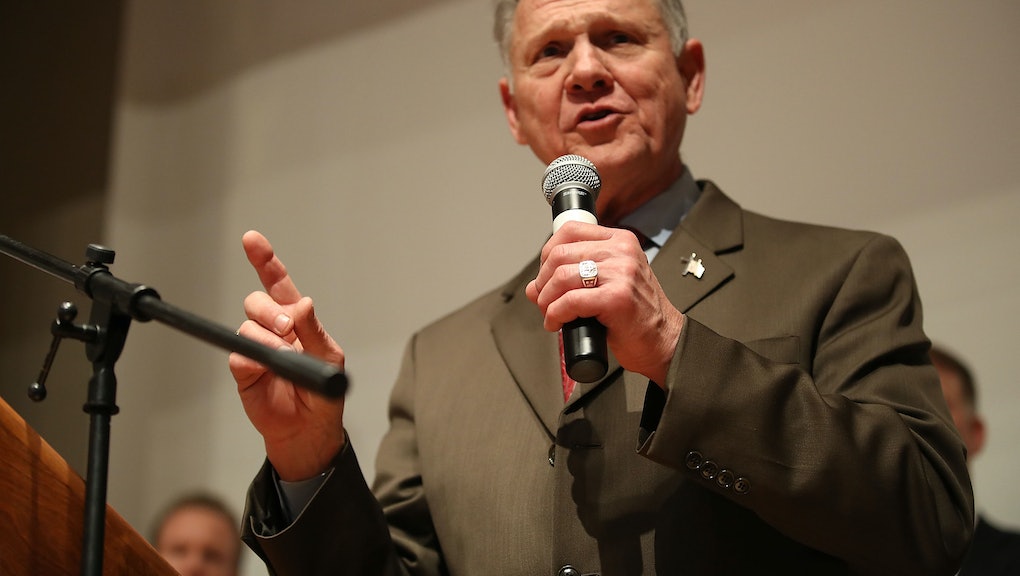 Late on Wednesday night, former Alabama Senate candidate and accused child molester Roy Moore filed a lawsuit to contest the results of a special election he lost by more than 20,000 votes earlier this month.

The suit comes just one day before Alabama’s canvassing board is set to certify the results of the election and could delay the official recognition of Democrat Doug Jones’s victory.

What is the basis for this lawsuit? In short: There is none.

But Moore has taken his cues directly from the president of the United States in this case, and has seemingly decided that reality is not a constraint in the pursuit of vindication. That’s why Moore is alleging — you guessed it — voter fraud.

What evidence does Moore cite to suggest that there was wide-scale voter fraud that could swing an election by more than 20,000 votes? Well, he lost, and in Moore’s eyes, that’s evidence enough of a conspiracy.

“In the complaint, Moore’s attorneys noted the higher than expected turnout in the race, particularly in Jefferson County, and said that Moore’s numbers were suspiciously low in about 20 Jefferson County precincts,” wrote the Associated Press, which broke the story Thursday morning.

In other words, the fact that more people turned out to vote for Jones than Moore is itself evidence of fraud.

The move is, of course, reminiscent of Trump’s post-election claim that he only lost the national popular vote in 2016 because millions of people around the country voted “illegally.”

That claim, much like Moore’s, defies all logic and reason and has been widely debunked by media outlets and fact checkers. But a similar reaction also didn’t stop Trump repeating the lie over and over, or from using it as the basis to create an entire election fraud panel for investigating the fictional deceit.

In fact, Republican leaders’ lackluster responses to Trump’s undermining of the democratic process proved that there was essentially no downside to using voter fraud claims to contest the results of an election.

So it’s no surprise that Moore decided it was worth a shot to contest the results of a clearly decided election. Regardless of whether Moore’s suit is successful, the precedent has now been set for Republican politicians to stoke conspiratorial fears in their base and contest the results of any election that doesn’t go their way.

The question is, what happens when a generation of Trump-era Republicans starts telling their supporters to stop believing in the democratic process whenever it doesn’t suit their agenda?

IRS delays a big part of Trump’s tax plan: The IRS has effectively delayed the portion of the GOP’s new tax law that would cap federal deductions for property taxes at $10,000 per year. The announcement is the result of huge rush by homeowners to try to prepay their property taxes for the coming year in this year’s tax filings.

Next stop: Trump Station: The Israeli government will name a new train station near the historic Western Wall after Donald Trump. The move appears to be an attempt to thank the president for his decision to move the U.S. Embassy in Israel from Tel Aviv to Jerusalem.

Out of sight: The Trump administration on Wednesday seemed to have had a large white truck follow the president from the street outside his golf course in order to block the media from filming Trump while he was golfing. The U.S. Secret Service denies being responsible for the truck’s presence.

Throwing Flynn under the bus: The Washington Post reports that the president’s legal team is reportedly preparing a strategy for 2018 that will portray Michael Flynn as a liar who is only trying to protect himself, should Flynn accuse the Trump administration of any wrongdoing.

The real Trump effect on deportation: The Nation’s Julianne Hing explains why you shouldn’t confuse lower deportations in 2017 with leniency, and how the Trump administration has really affected the lives of people trying to come to the United States.

The center won’t hold: The Outline’s Sean McElwee dives into the data on Democratic voter preferences to illustrate why Democrats in swing districts should run to the left, not the center.

Did you know that members of Congress currently use public tax dollars to settle sexual harassment claims against them?

Sen. Kirsten Gillibrand is working to change that — here’s how.