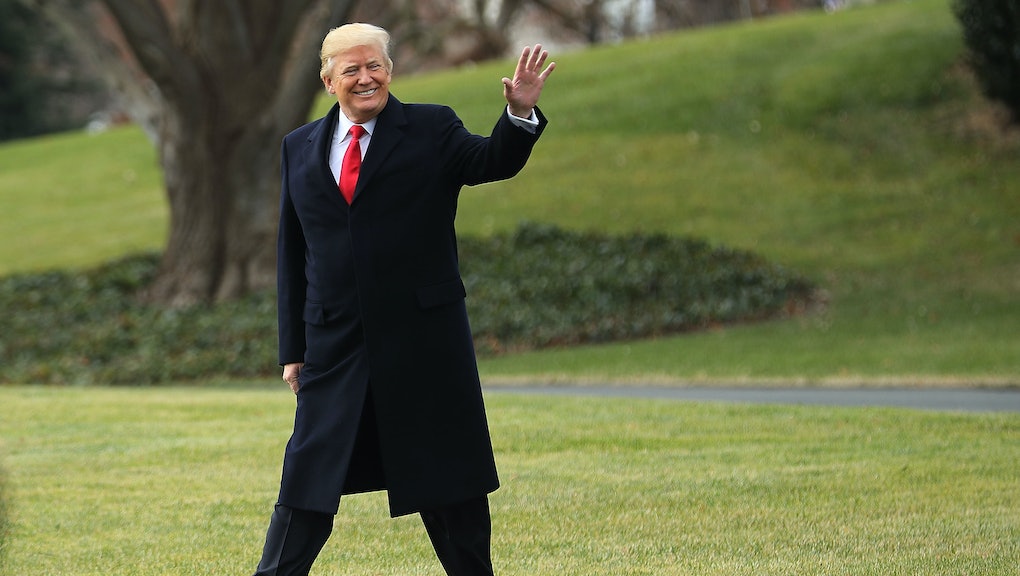 Late Thursday night, the New York Times published an impromptu interview that President Donald Trump gave to one of its reporters at his West Palm Beach, Florida, golf club.

On Friday morning, many pundits are rushing to analyze the topline story from the interview — Trump’s claim that he has the right to influence the Department of Justice in its investigations.

“I have absolute right to do what I want to do with the Justice Department,” Trump told the Times. “But for purposes of hopefully thinking I’m going to be treated fairly, I’ve stayed uninvolved with this particular matter.”

Trump’s critics have feared he may try and influence the Russia investigation, and his comments to the Times appear to justify those feelings.

But while the potential for Trump to interfere in the Russia investigation is genuinely concerning, outrage over the statement seems to have eclipsed another big news story about Trump getting involved where he shouldn’t.

Around the same time that the Times published the interview, the Daily Beast broke the story that an official within the Trump administration sent an email alleging that the president is still involved in the operations of the Trump Organization, despite his pledge to remove himself from its dealings.

Jeng Chi Hung, director of revenue and management at the Trump International Hotel in Washington D.C., reportedly wrote the following in an email:

“DJT is supposed to be out of the business and passed on to his sons, but he’s definitely still involved....So it’s interesting and unique in that way. I had a brief meeting with him a few weeks ago, and he was asking about banquet revenues and demographics. And he asked if his presidency hurt the businesses. So he seems self-aware about things, at least more than he lets on.”

Officials for the Trump Organization strenuously denied the allegations.

“Upon review of the email referenced in your inquiry, we have met with the individual and he has confirmed that he made these comments up in an effort to enhance his sense of importance to a former employer,” Mickael Damelincourt, the hotel’s managing director, told the Daily Beast. “In fact, this individual confirmed to me today that he has never met the president nor did any conversation ever take place. We are continuing to investigate this matter internally.”

The two stories of potential undue influence illustrate the divergent paths that Trump’s staunchest critics have taken to prove his lack of fitness for office.

On the one hand, the Trump-Russia story is a captivating mystery, with genuine news value, but that hinges on the findings of special counsel Robert Mueller’s inquiry.

That second issue, while notably less sexy than potential collusion with Russians, may be the simpler and more provable way for his detractors to demonstrate that Trump has committed an impeachable offense and is unfit for office — but really only if the public starts to take interest in that story.

Trump now thinks global warming is good: Trump tweeted about how the cold weather is evidence that a little catastrophic man-made climate change might be a good thing.

“In the East, it could be the COLDEST New Year’s Eve on record,” Trump tweeted. “Perhaps we could use a little bit of that good old Global Warming that our Country, but not other countries, was going to pay TRILLIONS OF DOLLARS to protect against. Bundle up!”

Virtually any climate scientist and most sensible people know that this is not how climate change works — that climate change actually increases the likelihood of extreme weather events like cold fronts.

Sessions wants to bring back debtors prisons: Last week, Attorney General Jeff Sessions retracted a series of Obama-era guidelines on criminal justice. This week, activists and former DOJ officials are claiming that the move will essentially allow police departments to jail people for being too poor. The guidelines were put in place after protests in Ferguson, Missouri, led to the discovery of widespread abuses in the city’s municipal traffic courts.

Trump boasts about fake news polls: Trump tweeted Friday morning, “While the Fake News loves to talk about my so-called low approval rating, @foxandfriends just showed that my rating on Dec. 28, 2017, was approximately the same as President Obama on Dec. 28, 2009, which was 47%...and this despite massive negative Trump coverage & Russia hoax!”

In reality, only one polling outlet, the conservative-leaning Rasmussen, has found Trump’s current approval rating to be as high as 46%. Trump’s polling average sits around 37%, considerably lower than Barack Obama’s 49% average around the same time into his presidency.

Our U.N. ambassador is taking prank phone calls: A pair of Russian comedians appear to have managed to get U.S. Ambassador to the United Nations Nikki Haley to speak with them by phone for over 20 minutes and express sympathy for a situation in a fictional Polish city. The entire conversation has been posted online.

Betsy DeVos’s most egregious move yet: In a piece for the New Republic, David Dayen digs into the consequences and implications of Education Secretary Betsy DeVos’s decision to end relief for a group of defrauded for-profit college students.

Meet Sophia. Under the new GOP tax plan, children like her could lose crucial coverage that helps their families afford treatment.