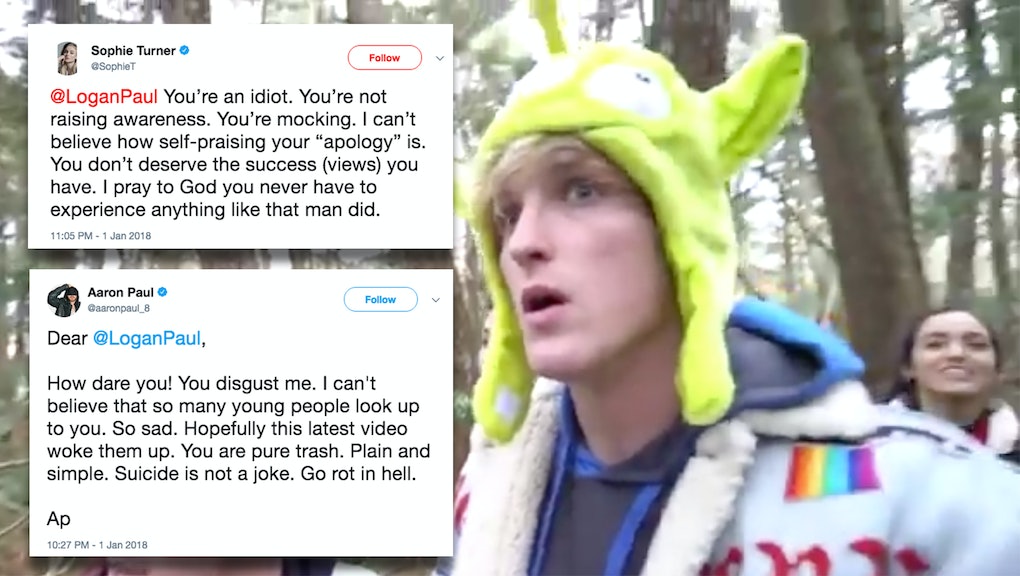 YouTuber Logan Paul posted video of an apparent suicide victim. Here’s what you need to know.

Prominent YouTuber Logan Paul posts video diaries on a near-daily basis in which he pulls stunts like jumping over Lamborghinis or fooling Pokémon Go players into thinking he’s found an ultra-rare critter. But on Sunday, his channel crossed a line from juvenile impishness to flat-out offensive.

In the video, which Paul deleted Monday, he and his friends found and filmed the body of someone who appeared to have died by suicide in Japan’s Aokigahara forest. The forest is sometimes called “suicide forest” because of its reputation as the second-most common location in the world to commit suicide.

It seems that Logan attempted to frame the footage — originally posted as part of a series meant to document his travels through Japan — as a shocking, gritty look at what he encountered.

“Suicide is not a joke,” Paul said in the video, according to Select All. “Depression and mental illness are not a joke. We came here with an intent to focus on the ‘haunted’ aspect of the forest. This obviously just became very real, and obviously a lotta people are going through a lotta shit in their lives.”

However, the video also showed Paul and his friends laughing and appearing to make light of the situation, as seen in an edited version of the original video tweeted by @JhbTeam. The day before Paul posted the video, he teased that it would be “the craziest and most real video” he had ever posted.

The public reaction was immediate, inspiring responses from prominent YouTubers like Felix “PewDiePie” Kjellberg — no stranger to controversy himself — as well as actors like Aaron Paul (Breaking Bad) and Sophie Turner (Game of Thrones).

In other threads, people shared the impact that suicide has had on their own lives, explaining how Paul’s video might be harmful to those with depression and suicidal thoughts. For example, Charlotte Clymer, an outspoken military veteran who recently came out as transgender, said that Paul’s video feeds into a culture of commercializing suicide.

Monday night, Paul also posted an apology for the video on Twitter.

“Let’s start with this,” Paul said. “I’m sorry. This is a first for me. I’ve never faced criticism like this before, because I’ve never made a mistake like this before....I intended to raise awareness for suicide and suicide prevention and while I thought, ‘If this video saves just ONE life, it’ll be worth it,’ I was misguided by shock and awe, as portrayed in the video.”

However, Paul’s apology drew a fair amount of criticism as well. For example, YouTuber Machaizelli “MacDoesIt” Kahey called it “an extremely dangerous narcissistic response” because of the way Paul emphasized his own popularity.

In another apology — this time, in video form — posted to Paul’s Twitter Tuesday morning, he appeared to address criticisms that his first apology didn’t strike the right tone.

For full-time YouTubers and Instagram stars like Paul, these so-called “comedy” videos are typically a primary source of income, but sponsors aren’t always aware of the content in those videos. It’s unclear yet whether companies that pay for ads on Paul’s channel will rescind support.

When reached for comment by YouTuber Philip DeFranco, YouTube said it “prohibits violent or gory content posted in a shocking, sensational or disrespectful manner. If a video is graphic, it can only remain on the site when supported by appropriate educational or documentary information and in some cases it will be age-gated.”

In a statement provided to HuffPost, YouTube said it issued a “community guidelines” strike against Paul’s channel, a punitive measure that may restrict some of the features of his channel for a short time. These strikes expire after a three-month period.

Fellow YouTuber and one of Paul’s friends, Andy Altig, also deleted his video of the events. It was originally titled “WE FOUND A DEAD BODY!!! **emotional**”.

Editor’s note: For information about suicide prevention or to speak with someone confidentially, contact the National Suicide Prevention Lifeline at 1-800-273-8255 or the Crisis Text Line at 741-741. Both provide free, anonymous support 24 hours a day, seven days a week.