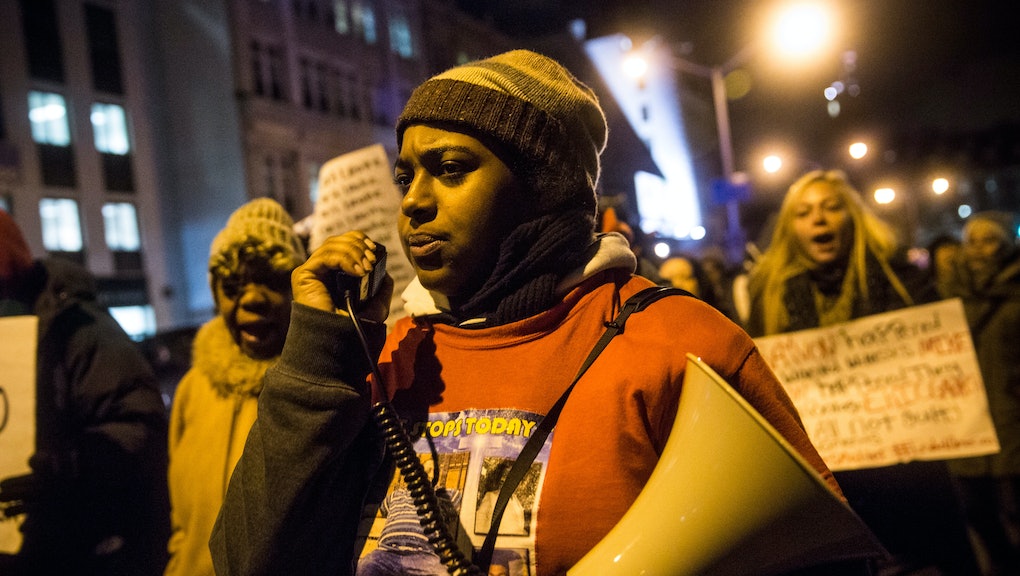 Erica Garner died in Brooklyn on Saturday after an asthma episode caused a heart attack. Doctors placed her in a medically-induced coma in an effort to save her life, but declared her braindead days later. She was 27.

Garner fell into activism by chance. Her father, Eric Garner, died after being placed in a chokehold by NYPD Officer Daniel Pantaleo in July 2014. His dying words, “I can’t breathe,” became a rallying cry for the Black Lives Matter movement, animating rallies and adorning T-shirts worn by celebrities and sports figures in solidarity.

Erica spent the rest of her short life fighting for black civil rights. She was a vocal fixture at protests and on social media. But her work has been mired in controversy since her death. An unidentified spokesperson has been operating Erica’s widely-followed Twitter account for the past week, giving frequent updates on her condition. After Erica died, the spokesperson tweeted a message directed at news outlets.

“Out of respect to Erica, please do not request comment [regarding her death] if the journalist is not black,” it read.

A minor outcry ensued. Some accused the spokesperson of racism. Others unfollowed the account in a huff. Others still claimed the statement was incompatible with Erica’s legacy, which they said revolved around bringing people together, not dividing them.

“Those who knew Erica call this post a disrespect to her and her legacy,” wrote WABC-TV anchor Bill Ritter.

“Delete this ... there are many non-black journalists who understand and empathize with the social issues she fought for,” another user wrote, calling the statement a “trash tweet.”

A cursory scan of Erica’s past comments about race and media shows that this statement was not just compatible with her legacy — it crystallized it. Erica frequently bemoaned the lack of black representation in journalism. She broadcasted her decisions to give exclusive interviews to black reporters, most notably black women reporters, and to take stories to black journalists before giving comment to others.

Never mind that, by doing this, Erica was fighting a strain of institutional racism that news companies have spent decades failing to fix on their own. Ignoring this amounts to co-opting her legacy. Instead of honestly assessing what Garner actually stood for, these commenters are engaging in the well-trod practice of recasting black rights advocates as colorblind figures who just wanted everyone to get along.

The most famous example of this narrative is the Rev. Dr. Martin Luther King Jr. The slain activist is revered today as an American saint, but was deeply unpopular and considered a radical in his time. He indicted white moderates for caring more about order than justice. He called for a “radical redistribution of economic and political power” during a 1967 speech, and was killed shortly after supporting a sanitation workers’ strike in Memphis in 1968. Perhaps most notably, King was rated negatively by 63% of respondents to a 1966 Gallup public opinion poll.

Today, King is invoked by officials and critics aiming to pacify black dissent. He is portrayed as a gold standard that contemporary black protesters fail to reach, a peacenik among rabble rousers — even as today’s advocates all but mirror his nonviolent tactics.

This more palatable version of King is a dishonest reflection of his legacy. It allows Americans — especially white Americans — to applaud a fictional man who lobbied for their love and acceptance, rather than reckon with a real one who criticized them relentlessly and blasted their institutions as corrupt and hypocritical, and to whom they responded with vitriol while he was alive.

It’s especially ironic that, by giving her story to black reporters to avoid this kind of misrepresentation, Erica Garner has made herself vulnerable to the same co-optation of which King was a victim. The difference today is that there’s time to preserve her legacy before it is subsumed by opportunists. It’s a task that should be taken seriously.