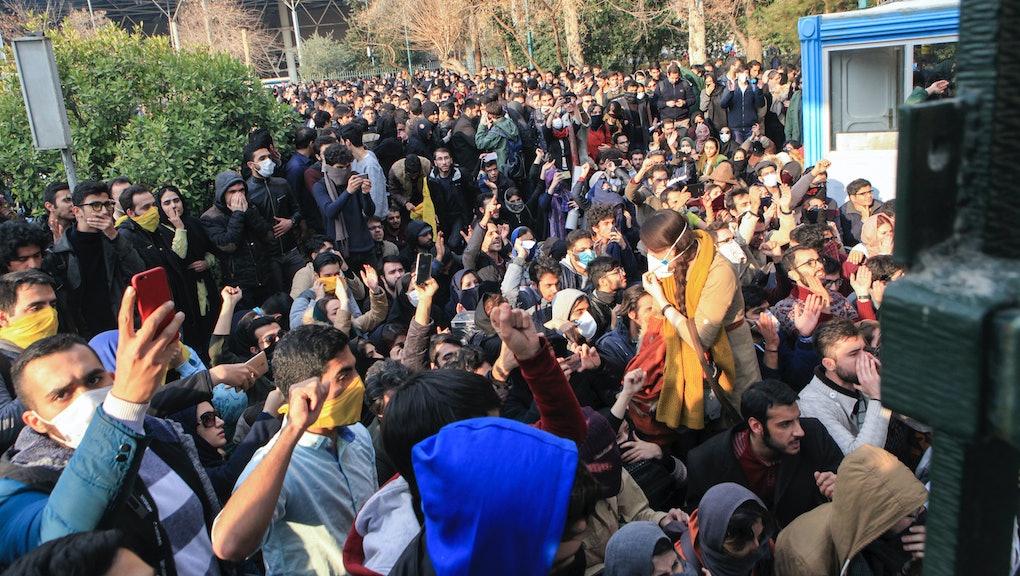 Protesters in Iran rallying against the country’s lackluster economy have earned the support of President Donald Trump. But as the widespread demonstrations grow, they could soon have a larger effect on U.S. foreign policy.

Since Thursday, cities across the country have seen demonstrations, which come at a critical moment for the strained Iran nuclear deal, as Trump faces looming deadlines that will determine the deal’s fate. Between Jan. 11 and Jan. 17, Trump will have to decide whether to certify the deal, and whether he will renew temporary waivers for U.S. sanctions against Iran.

Signed in January 2016, the Iran nuclear deal lifted the restrictive sanctions that the U.S. and its allies had placed on Iran, in exchange for the country taking steps to curb its nuclear program.

Trump previously de-certified the deal in October, after referring to it as “one of the worst and most one-sided transactions the United States has ever entered into” during an address at the United Nations. The de-certification didn’t cancel the deal entirely, but put its fate into the hands of Congress, allowing U.S. lawmakers to potentially impose new sanctions on the country — which they have yet to do. Trump now has another opportunity to certify the deal in January, as it must be re-certified every 90 days.

While the de-certification was “mainly symbolic,” Politico noted at the time, failing to extend the sanction waivers would be a far more dramatic move.

Should he decide to re-impose the sanctions, CNN notes, Iran and the other participants in the deal — China, Russia, Great Britain, France and Germany — may view U.S. as in violation of the agreement.

The protests’ potential effect on the nuclear deal

Though Trump has previously extended the sanction waivers — which must be renewed every 120 days — his decision of whether to extend them in January, and thus kill the nuclear deal, feels far less certain amid the ongoing protests.

“Look, we certainly keep our options open in terms of sanctions,” White House press secretary Sarah Huckabee Sanders said during a press briefing on Tuesday. “In terms of signing a waiver later in January, the president hasn’t made a final decision on that, and he’s going to keep all of his options on the table in that regard.”

The rallies have since expanded to include broader anti-government messages. As of Wednesday, ensuing violence from the protests has led to the deaths of 21 people thus far, according to the Associated Press, while hundreds more have been arrested.

Trump has capitalized on the Iranian government’s failings in his messages of support to the protesters, writing on Twitter Tuesday: “The people of Iran are finally acting against the brutal and corrupt Iranian regime.”

Now, Trump could potentially use the groundswell of support against Iran’s leaders as an excuse to take action against the nuclear deal. The president has voiced his opposition against the deal since it was first negotiated in 2015, and said in October that if Congress could not reach new terms for the deal, “the agreement would be terminated.”

“If the Iranians are killing people in the streets when it comes time for Trump to extend the sanctions waivers, it is hard to see him doing it,” Philip H. Gordon, a senior National Security Council official in the Obama administration, told the New York Times.

Trump said on Twitter Wednesday that the Iranian people “will see great support from the United States at the appropriate time.” But a decision not to renew the waivers could instead have a detrimental effect on the Iranian people he claims to support — as well as the U.S.

Anthony Cordesman, who holds the Arleigh A. Burke chair in strategy at the Center for Strategic and International Studies and a former national security adviser to Sen. John McCain, said in an interview with Mic that “all of the impacts” of revoking the waivers “almost immediately affect the welfare of the Iranian people” — whether by taking aim at their international banking system or other aspects of the country’s economy.

“If [the Trump administration] looks at these demonstrations and feels that, sort of turning the deal down and reimposing sanctions, could bring down a hostile regime, [they] might make that choice,” Cordesman said. “But you have to also understand, it would have an immediate impact on the Iranian people and it would almost certainly force the regime to take a much harder line towards the U.S. and its neighbors.”

Others note that not renewing the waivers would focus the attention on the U.S., shifting blame there instead of on the oppressive regime that’s currently the protests’ target.

“Right now, they cannot blame us or the international sanctions,” Gordon told the Times. “This could allow them to make the U.S. the enemy.”

So if pulling out of the nuclear deal isn’t the answer, how can the U.S. respond to the protests and the plight of the Iranian people? Experts cited by the Times suggest imposing targeted sanctions on Iranian officials or using the military to fight against Iran’s “destabilizing activities,” while Cordesman suggests a different approach. He notes the importance of “not [alienating] the Iranians who are protesting the economic situation by trying to lever this too much to serve our security interests,” pointing instead toward providing limited incentives to Iran specifically geared toward helping its people as a possible solution.

“I think the best approach would be to take a very broad stand that the U.S. feels that the Iranian people need help, that it is willing to take practical steps to provide them with aid, but that it is critical that this aid is not going to be used in ways that would strengthen Iran’s nuclear capabilities and missile capabilities,” Cordesman said.

Another step the U.S. could take, Cordesman suggested, would be to “provide transparency” that informs the Iranian people of how their government is using its money and resources. The U.S. could also prohibit the Iranian government from censoring coverage of the protests, as Iran did by prohibiting access to social media sites being used to spread information about the demonstrations.

Trump “has no popularity, no credibility on Iranian streets,” Trita Parsi, president of the National Iranian American Council, told the Hill. “You can’t claim to be on their side and then impose a Muslim ban and treat them as terrorists.”