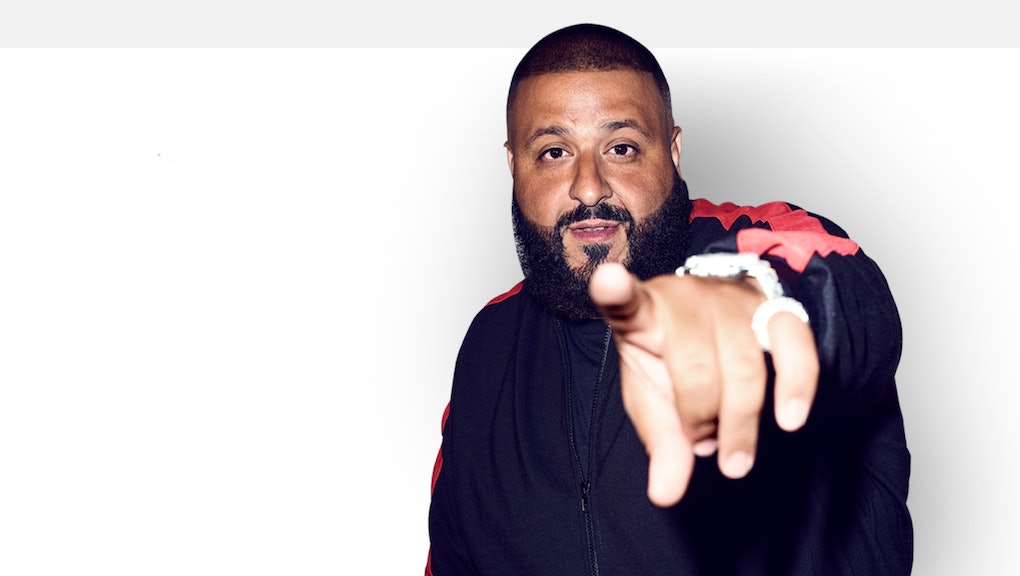 As 2018’s resolution season kicks off, DJ Khaled has added “Weight Watchers spokesperson” to his resume. On Monday, the company announced that the record label exec signed on as its new social media ambassador. Khaled said in a tweet that he has already dropped 20 pounds with its new Freestyle program.

Choosing Khaled as a spokesperson is a new kind of move for Weight Watchers. The media mogul represents a diversification in the weight loss industry (more on that later), and appeals to a broader swath of the community who is struggling with health issues, Thomas A. Parham, fellow of the American Psychology Association and author of The Psychology of Blacks: Centering Our Perspectives in the African Consciousness, said in a phone interview.

This could be huge. Numbers show that more than a third of the U.S. adult population is obese, but Americans of color are disproportionately affected: Black and Latino populations experience higher obesity rates than the white population does. As the face of Weight Watchers, Khaled has an opportunity to create a new narrative about healthy living and eating for people of color, a community of people that is often overlooked in the health and wellness space. In this new role, it’s up to Khaled and his partners at Weight Watchers to make a genuine impact.

“A lot of black men don’t talk about eating right and diabetes and how high blood pressure runs strong in our communities,” Kelvin Davis said. Davis is the author of the blog Notoriously Dapper, a body positive men’s fashion blog, and a book of the same name. “With DJ Khaled being on stage and saying, ‘This is who I am,’ [it] creates [a] narrative for men of color, saying that it’s okay for me to eat a little more healthy and be a little more conscious.”

Nabbing Khaled is an obvious win for Weight Watchers. With his mega reach — he’s got 8.9 million followers on Instagram — the brand is banking on appealing to a younger, more diverse market that they’ve yet to tap. The announcement led to an immediate financial bump: Weight Watchers shares have climbed by almost 9% since the partnership was announced.

“To be great is to be healthy; to be healthy means a shift in my lifestyle, and the new WW Freestyle program is all about healthier habits for my life.” — Khaled in a Weight Watchers press release

Khaled’s entry into the weight loss industry has potential to make a big impact, as it marks a shift in traditional weight loss messaging. “The weight loss industry is primarily directed at and embraced by the broader community of white females,” Parham said. “Part of what they have always embraced is a mindset that has more to do with social attractiveness — physical appearance.”

Parham said that while the billion dollar weight loss industry continues to profit off the desire to follow the American standard of beauty (white and thin), Khaled’s entry breaks the mold: His weight loss goals do not focus on appearance, but personal health. “My son is my love, my life, and I need to be great for him,” Khaled said in the Weight Watchers press release. “To be great is to be healthy; to be healthy means a shift in my lifestyle, and the new WW Freestyle program is all about healthier habits for my life.”

Why Khaled could be a “game changer”

This stance — that weight management is vital for a healthy lifestyle — is consistent with that of physicians across the country. “This, I think, is potentially a game changer,” Parham said. Whether Khaled is able to impact communities of color at large, and help confront some of the physical diseases that are impacted by the obesity epidemic (like heart disease and diabetes), depends on how Weight Watchers continues to market the media mogul’s expertise.

It’s not enough that Khaled is a person of color who wants to better his health. “You can de-segregate by color — the people who market your product. But there’s a fundamental difference between skin color and consciousness,” Parham said. Parham explained that typical marketing, even when using a spokesperson of color as a mouthpiece, is reflective of the consciousness of a white middle class norm.

This is, in part, why past Weight Watchers spokespeople Oprah and Charles Barkley — two other notable endorsers of color — didn’t shake the ground the same way that Khaled very well could. While the two were exciting representatives in their own right, Oprah’s billionaire status and minimal millennial savvy made her an unattainable role model, while Barkley’s “Lose Like a Man” campaign played into tired masculinity stereotypes and lacked authenticity. Khaled, while also super rich, has built his brand off speaking directly to his followers on social media; he’s coined the term “fan luv,” for example, which he often captures live when a fan comes up to him while he’s Snapchatting.

Khaled’s positioning in this campaign has yet to be determined, Parham said, but, as Khaled might put it, it’s major key. If Weight Watchers executives continue to follow “what the white culture suggests is more legitimate” and don’t allow their celebrity spokesperson to be himself, then Khaled will ultimately fail in making a difference, Parham said.

There could be good reason to allow Khaled to stay true to himself. “Everybody knows DJ Khaled is very comfortable about who he is,” Davis said. “He doesn’t give a fuck about what you think about him, and that’s the most beautiful thing about him.”