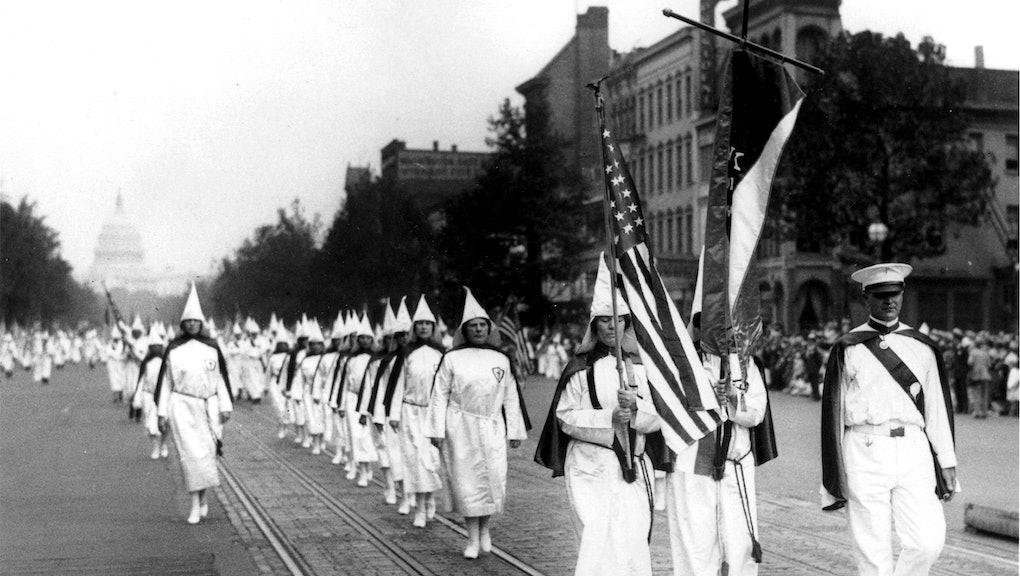 Why women have always been essential to white supremacist movements

Any social movement demanding a radical transformation of society needs the support and leadership of women. In 2017, women led the largest protest in United States history, and a grassroots uprising against sexual harassment in the workplace.

For the far right, women are vital propagandists and figureheads. White supremacy needs women, too. It always has.

In her new book The Second Coming of the KKK, historian Linda Gordon writes about the vital role of white women in the 20th-century rise of the Klu Klux Klan. This wasn’t the KKK of the 1880s, riding at night to break strikes and reimposing slavery through labor discipline and lynchings. The KKK of the 1920s was a corporate behemoth, part social club, part political movement. And this time, it wasn’t just blacks. The KKK of the 1920s tapped into a rich historical vein of nativism, the Klan expanded their spectrum of scapegoats to include not just blacks, but Jews, Catholics and immigrants.

According to Gordon, women were on board immediately — editing newspapers, organizing lectures and establishing Sunday School-like programs for children. While the Roaring ‘20s introduced young girls to jazz music, soda fountains and bobbed hair, the Women’s KKK promised a return to family values and traditional morality.

“Women did a tremendous amount of the Klan labor,” Gordon told Mic. “Women organized Klan rights of passage, baptisms, graduations, marriages and funerals. Every time they put on a big pageant or lecture, you can be sure that it was women who were doing the publicity and collecting the food.”

Conservative women at the time were able money managers and eager public speakers, and organizing with the Klan offered both a political outlet as well as what Gordon called “clubby solidarity.” Gordon said a low-ball estimate would put women’s enrollment in the Klan at 1.5 million at its highest point in 1923. In Indiana, over a third of all white protestant women were members, she said.

And after women won the right to vote in 1920, the Klan quickly established themselves as the gatekeepers to this new, untapped swathe of the electorate. In the 1920s, the Klan marshaled that support to elect 11 governors, 16 senators and dozens of congressmen from its ranks, with an untold number of other allies, according to Gordon’s book.

The women of the KKK were even able to marshall progressive ideas about women’s independence to construct a new brand of white supremacist feminism. Not all visions of women’s equality serve all women equally, Gordon said.

Here’s Mic’s conversation with Gordon about women in the KKK, edited for length and clarity:

Mic: When we talk about fascistic movements and the violence of the KKK, many refer to the masculinity of these movements as alienating in itself. Why would the KKK appeal to women at all in the 1920s?

Linda Gordon: I think the bottom line is there’s no reason to expect women to be less bigoted than men. Partly, we know that women, like men, are often susceptible to a strongman. And there are occasions in which women who may not have been vigilantes themselves, nevertheless, supported vigilantism.

And a key factor is that women had just won the vote, 1920, the Constitutional Amendment, and although it took a long time for women to begin to vote in large numbers, there were some who were really eager to follow that and see what engaging in politics would be like.

What roles did the women take on within the movement?

LG: We see, here, a kind of contradiction that you find in a lot of conservative movements. Not even ones as far to the right as this, which is that you will have people who articulate a very conservative, conventional view of gender roles: women belong in the home, women’s destiny is to be mothers.

At the same time, once people enter the world of politics, they find out its fun. It’s gripping, it’s interesting. We have seen this over and over again in conservative movements, this contradiction between what people say women are supposed to do, and what they’re actually doing.

You called your chapter on women “KKK Feminism,” which made me think of today’s white nationalist movement and its own version of feminism — returning to traditional gender roles.

LG: I think I named it that almost deliberately, to be provocative, because I want people to understand that feminism comes in all versions. You can have not only racist feminism, you can have feminism that speaks only to corporate leaders. You’ll remember Sheryl Sandberg’s book, called Lean In — that advice is totally irrelevant for 95% of the women in the United States. If you’re working at Walmart, or even if you’re a college professor, it’s not a useful strategy. It’s very limited.

There is a tendency for people to think of feminism as one coherent whole, which it has never been.

What kind of women are served by that KKK version of feminism?

LG: These women shared with men a hostility evoked by fear. That’s the heart of demagoguery: Not only do you claim the victim position, but you make people afraid.

What most puzzled me was the fact that people in the Klan could believe claims that were so outrageous on their face, that most of us would think this is absurd. They felt threatened as white people, even in a state like Oregon, where there were hardly any people of color.

There was a recent poll by NPR that said 55% of white Americans today feel discriminated against. But far fewer actually reported experiencing any discrimination. So you have a swathe of white people reporting discrimination they’ve never experienced. Where, then, does a narrative of grievance come from?

LG: The creation of fear is absolutely central. Demagogues take your grievances — whether they’re economic, or a feeling that you’re losing status — and tell a story that blames minority groups, in this case. They always put the blame downward at the people who are less advantaged, never upward at the people who have more power.

These fears are seemingly impervious to facts. The claim that immigrants are taking white people’s jobs was absolutely not true in the 1920s, but they heard these claims from people that you respect.

This is where ministers were extremely important in the 1920s Klan. We know that thousands of ministers urged people to join the Klan and spoke of the Klan as a really important part of an Evangelical revival.

Part of that is also true about modern women of the so-called “alt-right,” that their traditionalism that comes from Christian fundamentalism. How did the Christianity of the 1920s prepare many women for their roles in the KKK?

LG: Before joining an organization like the Klan, when women were involved in social groups, they were often church-related. Women were fundamental in raising money for those churches. They organized the bake sales and social events. For many of those women, the slide into the Klan was a completely organic move from that religion.

Part of it, I suspect, also has to do with a deference to religious authority. But we cannot underestimate the extent to which this was all completely self-serving. The Klan, in many ways, the ’20s Klan was a huge for-profit corporation.

This seems very bizarre as a form of a social movement today, but to the Klan it was entirely consistent. There’s nothing about that kind of Evangelicalism that repeats the Christian tradition of helping the poor and the people at the bottom.

In their view, the profit motive was the most important force in making America what it was.