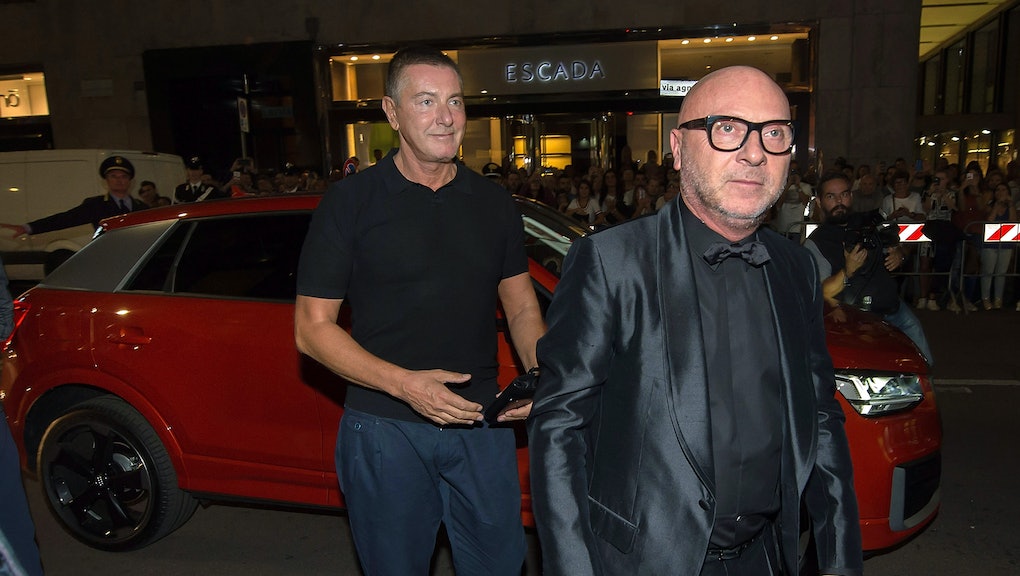 Diet Prada took a break from calling out fashion phonies to take aim at one of fashion’s biggest instigators: Stefano Gabbana, one half of the eponymous Dolce & Gabbana label.

In a video posted Thursday afternoon on its Instagram, Diet Prada posted a black-leather-glove-clad set of hands that can be seen setting fire to a Dolce & Gabbana label as Beyoncé’s “6 Inch” plays in the background.

The post has ignited hundreds of commenters ranging from “Shady” to “Savage,” to “I can’t,” to “Amen” to “Maybe a little bit too far?”

True to his known form, Gabbana responded in the comments section of the post, posting seven “face with tears of joy” emojis before writing “I love you more,” followed by three red heart emojis.

This feud is not new. In October 2017, Diet Prada called out the Dolce & Gabbana label, alleging that it had copied designs from Gucci.

Gabbana took to the comment section to offer up 10 “face with tears of joy” emojis — at least, that’s the comment that remains on the page.

In a follow-up post, Diet Prada posted the now-deleted public exchange they had with Gabbana. “Darling, I [have been doing] this job from 32 years, we made all this [work] in the ’90,” he wrote. “So if you are [ignorant] [it] is much better for you [to not] say anything about this image... Gucci [has copied] us in many different [ways]!!! This is one of [them]... please say sorry to me!!”

Then Diet Prada released the mock T-shirt in direct response to Gabbana’s comment with the following caption: “Did you enjoy the Instagram war we had with Stefano Gabbana? If so, you can own a piece of fashion history with our #PleaseSaySorryToMe T-shirt. ... Styling Suggestions: Wear this T-shirt when you’re feeling self-righteous and cannot check your ego by ANY means.”

According to Diet Prada, 20% of all proceeds would go to Nest Egg Foundation, a Connecticut-based nonprofit organization founded to help those struggling with infertility, to help fund in-vitro fertilization grants for LGBT parents.

“Normally, we would not respond in that way to anyone,” Diet Prada told the Cut in an email regarding Gabbana. “But given the extremely inflammatory things he’s said in the past, it was necessary.”

The inflammatory things they are referencing could range from calling Miley Cyrus “ignorant“ and threatening to never work with her brother again after the singer shared the fact that she disagreed with the designer’s politics to calling children born through in vitro fertilization “synthetic” to his claims that sexual harassment is “not violence” — really, take your pick.

“I don’t fuck with Stefano Gabbana or D&G after their Trump nonsense and I think his overuse of social media isn’t helping the brand,” Kerby Jean-Raymond, founder of the menswear label Pyer Moss, said in an interview with Mic. “At the same time I don’t condone the way they are handling him, I think Diet Prada is going a little too hard there. Burning his tags and shit is funny for Worldstar, but excessive for a credible fashion blog. I’ll probably unintentionally end up on there at some point as a victim or victimizer if I’m lucky, lets hope they are kinder.”

In late December, Diet Prada was at it again, this time mocking controversial comments made by Stefano Gabbana rejecting the gay label. “I don’t want to be called gay, because I’m simply a man … full stop,” Gabbana told Italy’s Corriere della Sera daily. Diet Prada’s mock T-shirt subverted his statement to show the reality that one could be both gay and a man.

The fire-set label isn’t Gabbana’s first public call-out in 2018 either. On Tuesday, model Chrissy Teigen said that she will neither wear nor purchase the label as a result of the 2015 IVF comments.

In addition to public call-outs from Diet Prada, Chrissy Teigen, Miley Cyrus and Madonna, there’s Elton John, Courtney Love and others, all of whom vowed to #BoycottDolceAndGabbana in 2015. Will continued negative press for the brand make Gabbana rethink his public image? If history is any indicator, it’s a hard no.

Mic has reached out to Diet Prada for further comment and will update when we hear back.