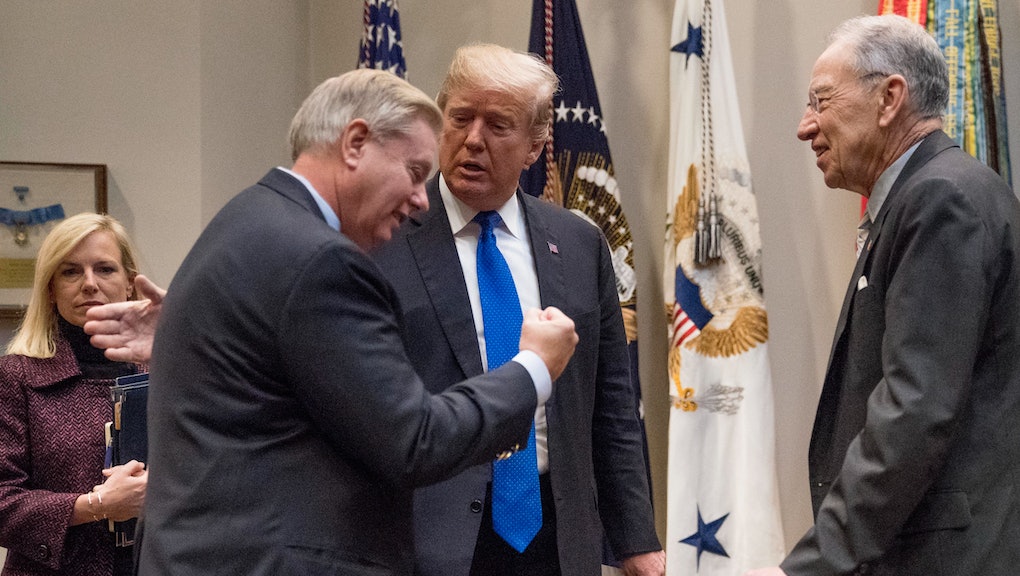 Sens. Chuck Grassley (R-Iowa) and Lindsey Graham (R-S.C.) on Thursday called for the Department of Justice to investigate the author of the now-infamous Trump dossier for allegedly lying to the FBI.

Former British spy Christopher Steele authored the dossier, alleging collusion between the Kremlin and President Donald Trump. The dossier was made public in January 2017, days before Trump’s inauguration.

“We are respectfully referring Mr. Steele to you for investigation of potential violations of 18 U.S.C. § 1001, for statements the committee has reason to believe Mr. Steele made regarding his distribution of information contained in the dossier,” Grassley and Graham wrote in a letter to the FBI and DOJ, released Friday.

Grassley, the chair of the Senate Judiciary Committee, and Graham, a member of the panel, based their letter on information contained in a “classified memorandum” related to Steele’s communications with the media. The senators did not explain what that information was.

“I don’t take lightly making a referral for criminal investigation,” Grassley said in a statement Friday. “But, as I would with any credible evidence of a crime unearthed in the course of our investigations, I feel obliged to pass that information along to the Justice Department for appropriate review.”

Graham is urging the appointment of a special counsel to investigate the intel, citing raw intelligence elements the DOJ missed.

“After reviewing how Mr. Steele conducted himself in distributing information contained in the dossier and how many stop signs the DOJ ignored in its use of the dossier, I believe that a special counsel needs to review this matter,” Graham said. “The rule of law depends on the government and all who work on its behalf playing by the rules themselves.”

The Judiciary committee is conducting one of the three congressional probes into Russian election interference. In August, the panel interviewed Fusion GPS head Glenn Simpson, who leads the firm behind the dossier.

The Steele dossier alleges that the Kremlin has been “cultivating, supporting and assisting Trump for at least five years” with the aim of encouraging “splits and divisions in Western alliance.” The dossier also contains the infamous claim that the Russian government has a video of prostitutes performing a “golden shower” show before Trump in a Moscow hotel room where Barack and Michelle Obama once stayed.

The Washington Post in October that the Democratic National Committee and Hillary Clinton’s campaign helped fund the investigation.

Trump has vociferously denied the dossier’s contents, and Republicans have used it in their attacks on the investigations into possible collusion between the president’s campaign and the Kremlin, claiming it was the pretense that began the ongoing probe in the first place.

However, the New York Times reported Dec. 30 that the FBI’s Russia investigation actually began because of comments George Papadopoulos — a former campaign adviser to Trump — had made to an Australian official in May 2016 about dirt he said the Russians had on Clinton. Simpson and Peter Fritsch from Fusion GPS wrote in an op-ed on Tuesday that they do not believe the intelligence they gathered was the original impetus behind the investigations.

Nevertheless, Republicans have continued to include the document in their attempts to undermine the investigation being conducted by special counsel Robert Mueller.

“It is a very strange animal,” Cotter said of the letter in an email to Mic. “The letter is a political document in my opinion, not a truly law enforcement document.”

Cotter said he believes the letter is part of a larger effort on behalf of Trump’s allies to “delegitimize anyone that brings forward evidence against the Republican administration regarding Russia.” He believes the senators’ high rank in the chamber could lead to action.

“I would not be surprised if yet another investigation will be opened,” he said.