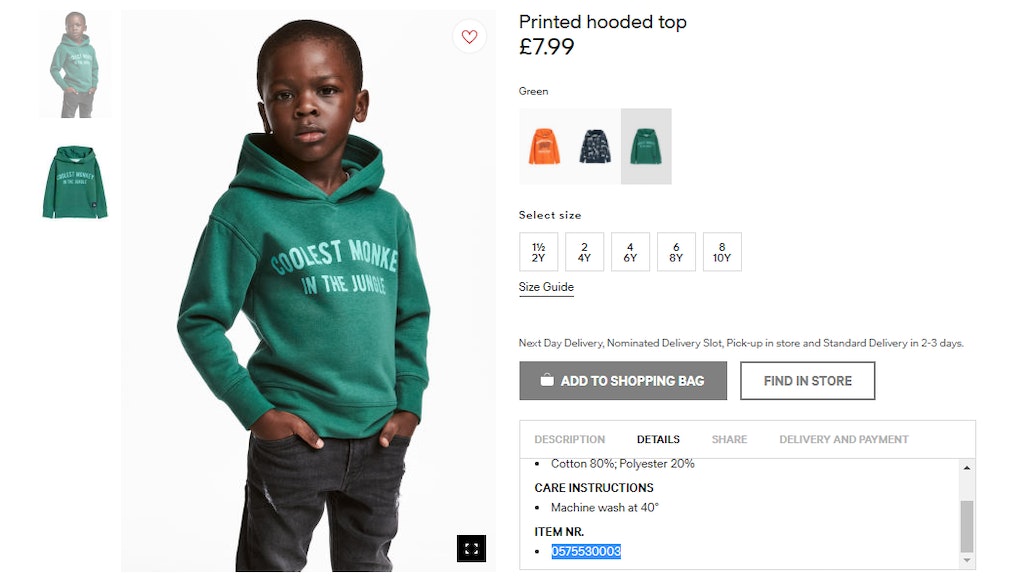 After outcry, H&M apologizes for black child model in “coolest monkey in the jungle” hoodie

H&M sparked fervent backlash after an image circulated Sunday and into Monday depicting a black child modeling a sweatshirt with the words “Coolest Monkey in the Jungle” on the front.

“Have you lost your damn minds?” New York Times columnist Charles Blow asked on Twitter. “Can’t believe it’s 2018 and this offensive sickening racism still exists,” one Twitter user wrote. “This is beyond disgusting ... You won’t see me anywhere near your shops these days,” another commented.

The controversy is the latest in a string of companies, including Dove and Nivea, that have faced backlash for advertising that seems to diminish black models in overt favor of white ones. H&M, a brand once known for its lack of diversity made a distinct pivot over the years, these days becoming known for its inclusivity on the runway as well as its subversive advertisements.

Though the H&M sweatshirt remains available on the company’s U.K. site, the model’s image has been removed. In a statement to Mic, H&M apologized and confirmed it had pulled the product from U.S. retailers.

“We sincerely apologize for this image,” the statement read. “It has been removed from all online channels and the product will not be for sale in the United States. We believe in diversity and inclusion in all that we do and will be reviewing our internal routines.”

Adding to the controversy was the appearance of a similarly aged white child in a sweatshirt reading “Survival Expert,” in stark contrast.

Despite the statement, some people — including the Root’s Anne Branigin — called the apology “lame,” with others wondering how an image like this was ever approved in the first place.