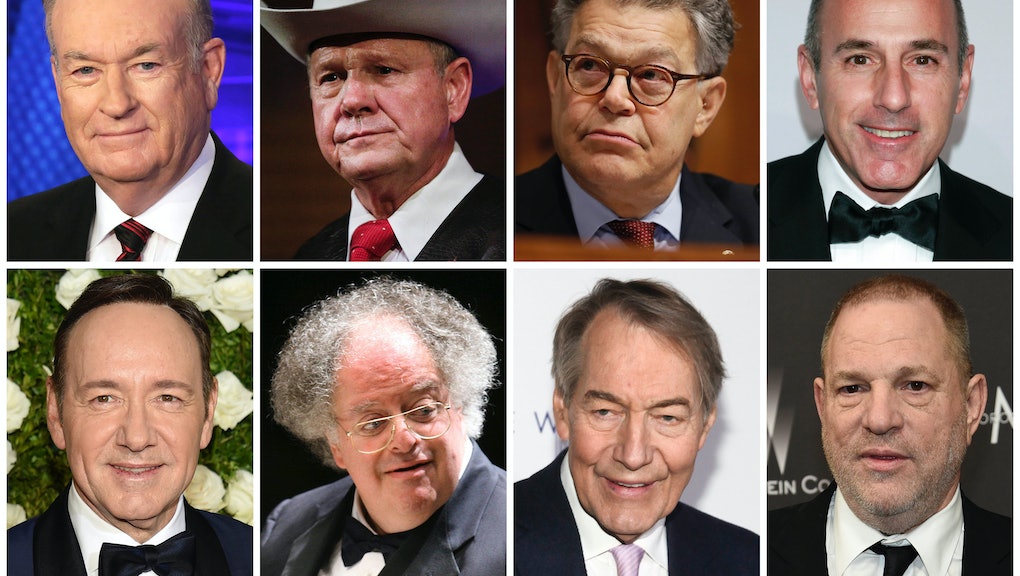 The day that the New York Times published its first report on film mogul Harvey Weinstein and the first series of allegations that he sexually harassed and assaulted aspiring actresses — has been dubbed a turning point in America. Many see Oct. 5 as the day that launched a reckoning, in which the issue of sexual harassment and misconduct, and the culture of silence that has long benefited abusers and made victims feel powerless, became a key issue.

In the offices of entertainment news magazine and website the Hollywood Reporter, Oct. 5 also marked a shift in how the publication would approach its entertainment industry coverage. Hours after the Weinstein story landed, the magazine established a new beat dedicated to covering sexual misconduct in Hollywood, according to the magazine’s editorial director, Matthew Belloni. Many of the magazine’s reporters were given a new directive: Focus primarily on nailing down the long-whispered rumors of sexual misconduct throughout the corners of the industry, and track down any new leads of sexual misconduct.

“[The change] was immediate,” Belloni, who has been with the Hollywood Reporter since 2006 and has served as its editorial director since February 2017, said in an interview. “This is now a full-time, full-court-press effort to report on this story. I knew immediately it was going to be the biggest story that had happened to Hollywood in years.”

This is not to say that the magazine hadn’t covered sexual harassment or assault in the entertainment industry in the past; for one, the publication had covered allegations of sexual assault against X-Men director Bryan Singer in detail in 2014, Belloni stressed. But before Oct. 5, workplace sexual misconduct wasn’t something that reporters were covering day-to-day. Now, seven reporters at the site are primarily focused on covering sexual misconduct, chasing down leads and vetting tips.

The newsroom shift has been justified by the wave of alleged victims of harassment and misconduct who have come forward since the Weinstein story was published. In the weeks after its publication, Hollywood Reporter staffers were receiving up to 15 tips a day.

“People are coming forward in a way that they never have before, and that has prompted a lot of [these stories,] Belloni said. “So some of it is merely just being a good reporter and following the tips you get. But we’re also looking at this issue in a different way and approaching with ears open. We want to hear those stories, and I want our people to be aggressive about finding those stories.”

The Hollywood Reporter’s aggressive investment in covering sexual misconduct in Hollywood, first noted in a New Yorker article, has seemed to help keep the ongoing harassment story moving along. A week after the Weinstein story dropped, Hollywood Reporter investigative reporter Kim Masters broke the news of sexual harassment allegations against Amazon Studios executive Roy Price, which prompted his suspension and eventual resignation. Since then, the publication has also broken news of allegations against Dustin Hoffman and Jeffrey Tambor, among others.

It’s not just the Hollywood Reporter that has rethought its coverage of Hollywood in the wake of the Weinstein story. At BuzzFeed News, the cultural reckoning has also prompted a number of changes, including a restructuring of the site’s entertainment desk and the creation of an entertainment enterprise team, which is being led by senior features editor Marisa Carroll. That restructuring was expressly in response to the Weinstein story.

Under Carroll, the BuzzFeed News entertainment enterprise team has been leaning into aggressively reporting out tips alleging sexual misconduct in the industry. But Carroll stressed that BuzzFeed News has cared about sexual harassment before Weinstein. The site published reporting on R&B star R. Kelly in the summer of 2017, for instance, and it has covered issues of sexual harassment and assault on college campuses for years.

“We’ve had people following this issue for years and it’s something we take really seriously as a newsroom,” Carroll said in a phone interview. “As far as our approach in the entertainment division, we’re definitely focusing more on enterprise reporting and taking tips and reporting them out with the same rigor and care as we would do with any other tip.”

The amount of tips BuzzFeed News is fielding has skyrocketed in recent months. Carroll credits this to more alleged victims coming forward with their own stories of abuse and harassment. A week after the Weinstein story dropped, an idea was floated at an editors’ meeting: Why not ask BuzzFeed News readers explicitly who the Weinstein of their industry was? So the site did, publishing the post “Who Are the Harvey Weinsteins of Your Industry? Tell Us” Oct. 12, a week after the Times story started the conversation.

Within 24 hours of publishing the post, BuzzFeed News received more than 60 tips reporters could act on; by the end of the weekend, editors had more than 200 tips they believed they might be able to report out.

“We were expecting some people to tip us, but we weren’t expecting floodgates,” said BuzzFeed News special projects editor Ellen Cushing. She is tasked with reviewing tips of sexual misconduct, assigning them to reporters and generally serving as the point person on all stories related to the topic. “We were inundated.”

BuzzFeed News has since reported on sexual harassment allegations against actor Kevin Spacey and former Michigan Rep. John Conyers, as well as nearly 200 sexual assault allegations that occurred at the massage chain Massage Envy. In November, BuzzFeed News published more than 55 stories about sexual misconduct, according to a company spokesperson.

Cushing is, to some degree, looped into just about every single sexual harassment story BuzzFeed News produces. She estimated that at least 30 stories related to sexual misconduct were in the works at the publication in the first week of January. Some of these may never see the light of day, she said, but others are fast approaching publication.

“And you just have to chase those tips,” Carroll said. “What are you going to do? Sit there and not respond to them? Say you have something else that’s going on that week? No. You follow where the news is.”

“We’ve had reporters on nine different desks in five countries working on this kind of story in last 2 1/2 months,” Cushing said. “ ... We’ve had many, many writers jump into this field for the first time ever in these last few months. It’s really all hands on deck.”

The Times, which since the Weinstein story has published a number of other reports detailing allegations of sexual harassment and assault, has also rethought how it has approached some of its coverage. Style editor Choire Sicha wrote in a note to readers that red carpet coverage would be revamped to better cover Hollywood’s underbelly, along with the red carpet coverage that some readers crave.

“Given the enormity of our cultural reckoning in the last year with how women are treated in the workplace, on the internet and in Hollywood, we want to take a fresh look at how we cover this stuff,” Sicha wrote in the note, which laid out how the paper would cover red carpet events in the upcoming year. “We think folks enjoy the fantasies of Hollywood but also don’t want to endorse the lies and secrets.”

The change was evident in the Times’ coverage of Sunday night’s Golden Globes. Photographer Damon Winter, who won the Pulitzer Prize for his photography of Barack Obama’s 2008 presidential campaign, photographed the parade of actors and actresses on the red carpet, many of whom were clad in black and promoting a cause for gender parity in Hollywood.

Given these shifts on coverage, the cultural reckoning and the media landscape will not be a 2017 story. Publications are bracing for the long haul.

“People always ask me when I think [these stories are] going to stop, and I don’t have an answer,” Belloni said. “I don’t know if it’ll happen. I think it may be a permanent part of the culture now.”