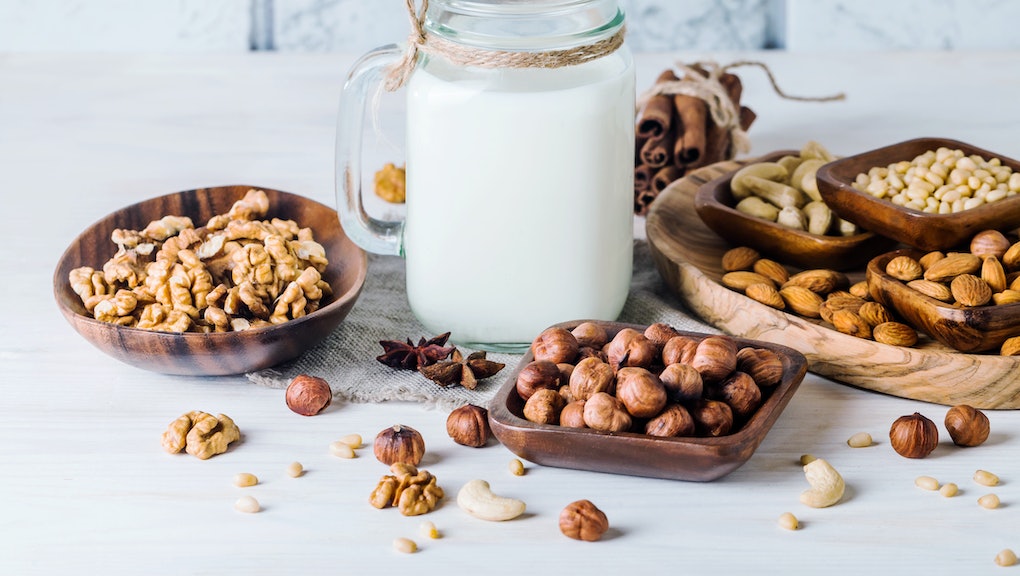 Which nut milk is right for you?

Nut milk! It’s not just a funny word: These alternatives to cow’s milk are storming supermarket shelves faster than you can say “moo.” The global market for milk alternatives — including beverages made from almonds, cashews and soy — is expected to be worth over $16 billion in 2018, up from $7.4 billion in 2010.

Cow’s milk used to have a prominent spot in American diets. Splashed over cereal or served by the glass, the dairy product was touted as a mandatory part of a healthy diet. But these days, the average American drinks 37% less milk than they did in 1970, the Washington Post reported.

The reasons for foregoing cow’s milk vary: Consumers are choosing plant-based milks to avoid industrial-scale dairy production or because they simply cannot digest lactose, a sugar in cow’s milk. But what’s the best nut milk for every occasion? These tips can help you cut through the confusion — and the crowded dairy aisle — to find the best nut milk for you.

According to Alissa Rumsey, registered dietitian and former spokesperson for the Academy of Nutrition and Dietetics, most “nondairy milks” are low in protein and calcium compared to cow’s milk. “The exceptions are soy milk and plant protein milk made with pea protein — these nondairy milks have a similar protein content compared to cow’s milk,” Rumsey said in an email. Both cow’s milk and soy milk have roughly 8 grams of protein per cup, according to the Department of Agriculture’s nutrition database.

Rumsey also noted that many nondairy drinks are fortified with calcium and vitamin D, but it’s always helpful to check nutrition labels and compare brands. “You can also get calcium from yogurt, cheese, broccoli, kale, almonds, beans, and calcium-fortified foods such as orange juice,” Rumsey noted.

In a 1-cup serving, there are roughly:

In a 1-cup serving of almond milk, there are roughly:

In a 1-cup serving of Silk unsweetened cashew milk, there are roughly:

But take a gander at the ingredients list before you decide to buy. Many brands have added sugars to improve taste in their “original” formulas, so reach for “unsweetened” versions if you want less of the sweet stuff. Plus, many brands use man-made and natural additives like carrageenan, guar gum or xanthan gum to make beverages creamier and to improve the mouthfeel. There’s been mixed reports that carrageenan, an additive derived from seaweed that is commonly used to thicken dairy and nondairy products, is bad for health, and the National Organic Standards Board banned the additive from organic food in 2016, NPR reported.

In a 1-cup serving of Milkadamia unsweetened macadamia milk, there are roughly:

Macadamia nut milk lattes might be pricier than your average cup of joe, but the nut milk adds a subtle buttery, nutty flavor that results in a deliciously rich coffee drink. While some nut milks (cough, cough, almond) tend to water down coffee or cold brew, macadamia milk is closer to the smooth and creamy taste of cow’s milk. (Cereal lovers take note: It’s still not quite as thick as real dairy, resulting in less satisfying spoonfuls.)

Choose peanut milk if you live for peanut butter.

In a 1-cup serving of Elmhurst Milked Peanuts, there are roughly:

One of the newest nut milks on the block is a peanutty doozy: a beverage made from “milked” peanuts. Each 8-ounce glass of Elmhurst peanut milk is made from 31 peanuts, and has 11 grams of fat, 5 grams of sugar and 6 grams of protein. It tastes like the sweet milk that’s left over after eating a bowl of nutty-flavored cereal, making it a good choice to liven up nondairy smoothies.