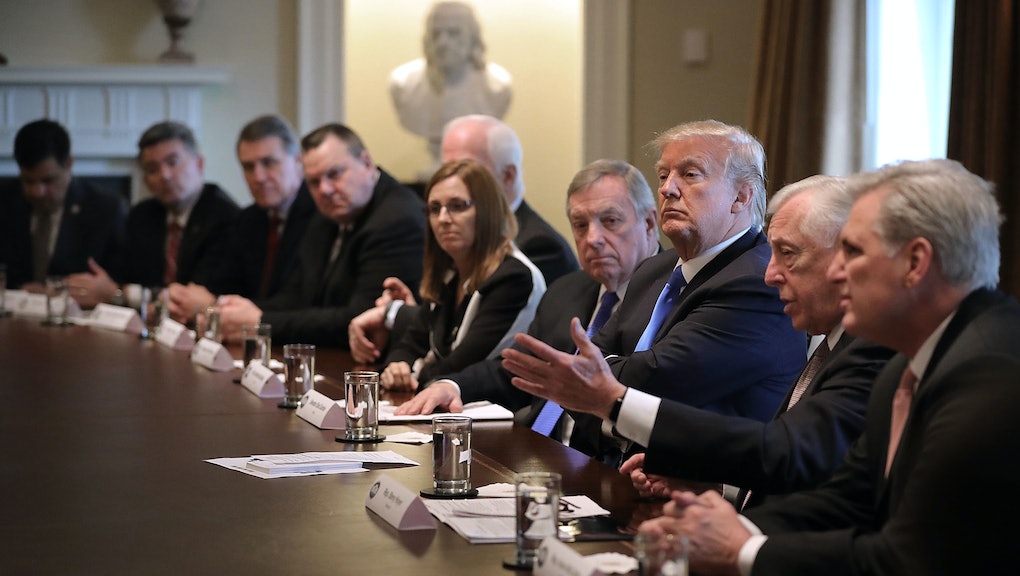 President Donald Trump expressed his frustration Thursday with a bipartisan immigration deal in the works in Congress. Some lawmakers insisted on protecting immigrants from Haiti, El Salvador and African countries as part of the agreement. Trump preferred immigrants from Norway.

“Why are we having all these people from shithole countries come here?” the president said during a meeting in the Oval Office, according to the Washington Post. (Trump on Friday denied he said this. A spokesperson on Thursday did not dispute the Post’s reporting. CNN’s Jake Tapper reported that Trump was only referring to the African countries when he made the comment, not Haiti or El Salvador.)

“Why do we need more Haitians?” the president added. “Take them out.”

Trump went on to suggest the U.S. accept more immigrants from places like Norway instead, or from Asian countries that, in his estimation, would better aid the U.S. economically.

By now, Americans are used to Trump’s crude and racist outbursts. But this statement struck an especially sensitive nerve with pundits, politicians and social media users, all of whom sprang into action to either dispute or cosign the comments. CNN anchor Anderson Cooper gave a tearful tribute to the resilience of the Haitian people on-air. Children of African immigrants insisted upon the virtue and hard-won accomplishments of their parents, while other Twitter users pointed to Haiti’s embrace of Jewish refugees during the Second World War as proof of the nation’s high moral character.

One could easily dismiss this spat as a distraction from the Trump administration’s more concrete attacks on civil liberties and regulation. And in some ways, it is. But the real distraction is more profound than just flipping the bird with one hand while looting the country with the other. With a single throwaway remark, Trump successfully goaded the world into debating whether more than 50 majority nonwhite nations have value.

There is nothing new or particularly startling about this, minus perhaps the vulgar language used. Nobel Prize-winning novelist Toni Morrison explained this dynamic 42 years ago, referencing centuries of American and European propaganda that cast people of color as culturally deficient savages.

Here’s what she told a crowd gathered at Portland State University in 1975:

Remarkably, the burden has now fallen to those who disagree with Trump to prove that millions of Africans, Haitians and Salvadorans have the same inherent worth as Americans and Norwegians. The word “shithole” has now appeared on American TV news more in the last 12 hours than perhaps all of U.S. history combined. It’s an imprecise designation, but seems a proxy for some combination of poverty, blackness and brownness. Reporters are tweeting screenshots of internal newsroom correspondences in which editors are advising them on its proper usage. It is also, apparently, an accepted descriptor for these countries in some conservative media circles already.

“Option A: El Salvador isn’t a ‘shithole,’ so they don’t need 17 years of Temporary Protected Status, and migrants from there should be sent home immediately,” tweeted Fox News anchor Tucker Carlson. “Option B: El Salvador is, in fact, a ‘shithole.’”

The important thing to know is that this debate is unserious. It is not intended to be an intellectually honest conversation about poverty in Africa, gang violence in El Salvador, infrastructure and public health in Haiti in the wake of natural disasters or the devastating legacy of colonialism on indigenous populations worldwide (all ills that plague the U.S. as well, it’s worth noting). It is meant to do little more than challenge the humanity of the people who live in these countries. And that challenge is meant to determine whether they are worthy of life in America.

Unfortunately, that doesn’t mean these comments can be dismissed so easily. Such is the power of bigotry. That it is absurd does not mean one does not have to confront it seriously, or earnestly engage with the fact that it dictates real policy around human migration and citizenship. The reality, as Morrison put it, is that there will always be one more thing. And by the time Haitians, Salvadorans and Africans satisfactorily prove to Trump and his ilk that their homes are not shitholes, and that where they are from does not define who they are, there will still be other ways to mark them as less worthy, other holes out of which they must dig themselves.