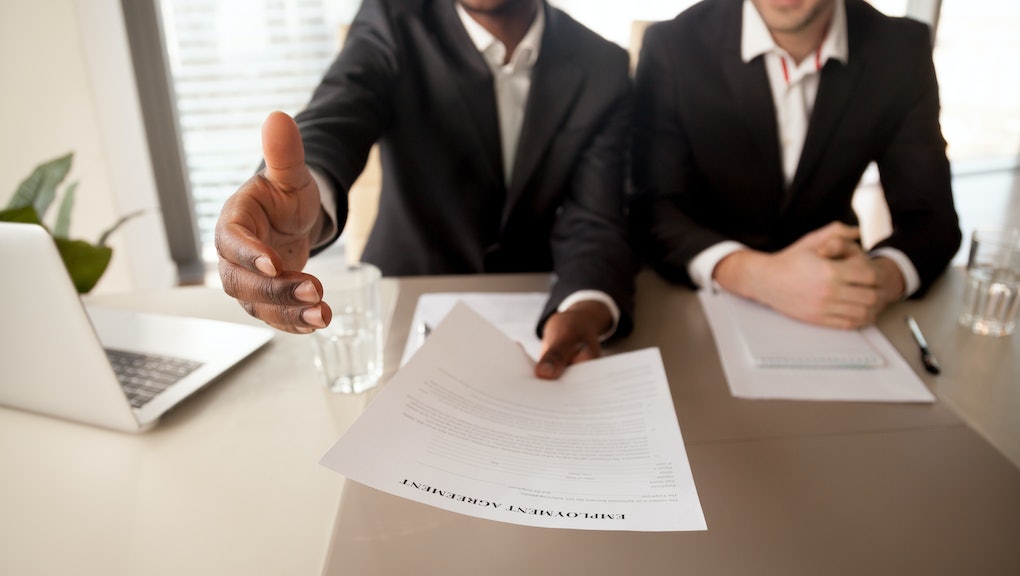 If you’re thinking about making a career change in 2018, you’re not alone: More than a third of hiring managers expect more employees to leave their jobs in 2018, according to a new survey from career website Glassdoor. That might be good news, if it suggests that workers are feeling more empowered to fight for better wages than they have in the past.

Indeed: the main reason for all the new quitters? Some 45% of those surveyed by Glassdoor cited salary as the reason for departures, ahead of career advancement, benefits, and location concerns. The company surveyed roughly 750 recruiters and hiring managers to collect the data.

One of the most surprising things about the post-recession economic recovery has been the dearth of raises. Real hourly wages, which account for inflation and reflect purchasing power, increased just 0.4% between December 2016 and December 2017, according to the latest figures from the Bureau of Labor Statistics. And the average worker still makes just $47,000 a year, while CEOs of big companies make around 300 times that on average.

In other words, it’s about time for pay to start increasing. Some sectors, including security, food services and clothing stores have already seen notable wage gains of up to 7%, the New York Times reported. That’s also true in cities like Indianapolis, where the unemployment rate is below the national average of 4.1%, a 17-year low. What’s more, minimum wage rose in 18 states this year.

“A lot of raises are coming,” said economist and analyst Alan Cole on Twitter, adding that it will be difficult to “disentangle” the many causes, though it’s worth noting economists started seeing signs of strengthening wage growth for workers as early as last December — before the tax bill was passed.

How can you personally take advantage of rising wages and strong demand for workers by employers? Here are three ways to earn more in 2018.

1. Know your worth, to the dollar

You can’t ask your boss — or a prospective boss — for more money without doing some homework. You need to be able to justify your “number,” or why the employment agreement you signed needs an update. Maybe your pay has not kept up with your responsibilities, or cost of living increases, or the company’s increasingly high profile? All of these are valid reasons, but it helps to have solid figures to back your case up.

A good tool for researching what you could be making is the Labor Department’s Occupational Employment Statistics, which houses information not only on median pay for different professions across the country, but also how much employment and wages are expected to grow in the near-future.

Sites like Glassdoor and Payscale also collect self-reported salaries, but the best way to find out the going rate for your job in your area is to start sending out your resume and going on interviews to see what’s out there. It’s also a good idea to talk to industry peers. If you’re lucky, you might land an offer, which you can use to negotiate higher pay with your current employer. (Just be prepared to leap if you bring the other offer, since your employer may be looking for an excuse to get rid of you.)

The more precise you are with what you expect to earn, the better: One study found that people who asked for nice round numbers, like $5,000, fared worse than people who were hyper-specific, by asking for $5,025, for example.

2. Bring in your emotions — in the right way

Interestingly enough, when it comes to negotiating with a stronger party — for example a hiring manager, or someone who lent you money — it might not pay to be a cold, calculated negotiator. That’s according to one study from researchers at the University of California at Berkeley, who found people who use emotional appeals make the stronger party feel open to compromise.

In one study, the authors compared the effectiveness of “sympathy-eliciting appeals” with simply rational ones. When the boss tries to play your sympathies in that way, it tends to come across as disingenuous. But when the person in the weaker negotiating position shares vulnerability — and identifies reasons why the stronger party can also benefit — that privileged party is more inclined to be helpful, according to the study.

That’s not to say that the best way to get a raise is to talk about how hard up you are: Playing the sympathy card when there’s nothing in it for your boss could just as easily backfire if it it indicates that you’ve got nothing to offer.

Instead, come to the discussion prepared to explain why what’s good for you — whether it’s funding for continuing education and new skills, a pay bump to match new responsibilities, or more time off so you can feel refreshed — can also be good for them.

It’s rarely wise to quit your job without another one lined up. But if you may choose to go that route, first make sure you have enough money in the bank — for food, rent and emergencies — to tide you over until you find your next gig.

A good rule of thumb is to have about three to six months of living expenses saved up in an emergency fund before you make the leap. The money should be easily accessible, preferably in an interest-earning bank account. The easiest way to figure out how much you’ll need is to start tracking your monthly expenses and make a budget.

And remember, you might need a little more each month once your employer is no longer subsidizing costs like health care or transportation. To truly get a clear picture of how much you’ll need, use a cost-of-living calculator that factors in expenses like health insurance and kids.

If you do decide to quit, make sure to leave on good terms. That means giving ample notice, finishing up projects you’re in the middle of and staying in touch on LinkedIn or social media after you walk out the door.

Stay positive: The job market is solid right now and you’ve got a range of options for great companies and new positions in 2018. If your current gig or career makes you unhappy, it might be time to pivot in a big way.