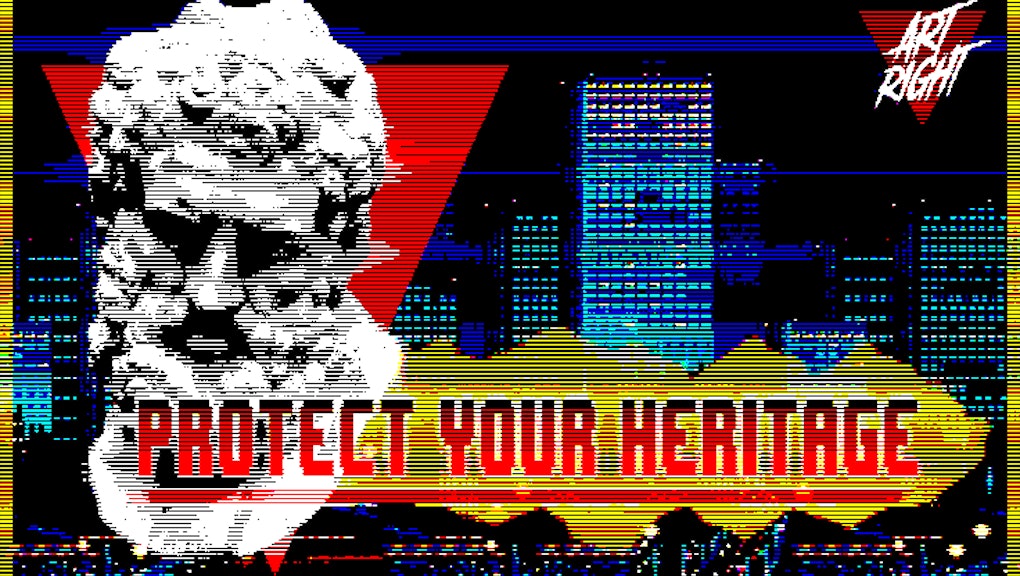 This is fashwave, the suicidal retro-futurist art of the alt-right

In the online art workshops of the white nationalist alt right, young neo-Nazis and neo-fascists trade simple aesthetic tips: Consider your color scheme in advance, build your image in sections of thirds, abandon gradients and add a soft stroke to the text.

The manic artwork builds slowly, with marble busts of Greco-Roman statues cast in neon lights, German political and military leader Hermann Göring with his face obscured by a glitch effect, and retro-futuristic landscapes that look more like a scene from Blade Runner than German propaganda film Triumph of the Will.

This is fashwave: the aesthetic style of the alt-right — or the “art right,” as this corner of the culture sometimes calls itself. Though the far right in general hedges its hate speech in layers of ironic distance online, fashwave wears its ideology on its sleeve. In fashwave, as in all fascist art (yes, that’s what the “fash” part stands for), the far right’s insecurities and apocalyptic death wish are chiefly on display. This work could be the most original cultural product of the alt-right.

“It’s some kind of synthesis of traditional form and post-industrial disillusionment of the human condition, but in a way that embraces this existential pain in a surrealist fashion,” reads one post attempting to define the medium on an online chat server for “fashthetic” artists called Esoteric Techno Fascism.

Like the aesthetic styles of white nationalists throughout history, from Hitler’s manufactured Aryan mythology to the appropriation of punk rock by skinheads in the 1970s, fashwave is stolen. The style amounts to a racist clone of vaporwave, the visual and musical aesthetic born on the internet in the early end of this decade.

Vaporwave, as a style, uses discarded remnants of early-internet themes, like vector art, pixel painting, bright neon and tropical landscapes from the screen savers of yesteryear. Fashwave employs much of the same, set against the backdrop of burning cities and superimposed swastikas and sonnenrads, the ancient European symbols appropriated by the Nazis.

Like progressive cultural innovations of the 20th century, it is vaporwave’s subtle politics that prepared its inevitable right-wing appropriation.

The accelerating production of new technologies has created a lot of junk. In only a few years, items like CD-ROMs, clip art, Game Boys and the Motorola Sidekick have become historic artifacts from digital antiquity. Pixel art and the Windows 95 startup noises remind us of a young, idealized internet of promised possibilities, before the realities of abuse and political tribalism gave us the web we deserve, instead of the one tech utopians promised for us.

The nostalgia fix of vaporwave becomes a spiritual release from the dizzying rate of change caused by new products and apps and the near-instant ubiquity of smartphones. Such a societal discomfort was predicted by none other than Karl Marx in the Communist Manifesto; many believe this is the origin of the term.

“All fixed, fast-frozen relations, with their train of ancient and venerable prejudices and opinions, are swept away, all new-formed ones become antiquated before they can ossify,” Marx wrote. “All that is solid melts into air, all that is holy is profaned, and man is at last compelled to face with sober senses his real conditions of life, and his relations with his kind.”

Vaporwave and fashwave both play in the ruins of modern consumerism. And both genres force us to consider how much we have lost so quickly.

Which is why vaporwave is set up perfectly for a right-wing heist, just as the far right has stolen leftist youth culture for decades, from Hitler to heavy metal. Where Marx predicted that dissatisfaction with capitalism would set up a revolution against the rich, fashwave instead proposes that Western civilization is already fallen and the only way forward is a return to white supremacy and traditionalist dogma. Where vaporwave reflects a crisis of capitalism, fashwave sees absolute apocalypse.

The white nationalist alt-right and its myriad factions believe that society is in ruins because white men have lost control of the Western world to women, Muslims, immigrants liberals and a conspiracy of Jewish overlords. In fashwave art, the modern metropolis has crumbled. “Out of time,” one image caption warns. “The West Is Dead,” another says, more explicitly.

The trouble here — as is the trouble with all fascist fantasies of the past— is that this gilded history of white supremacy, represented in fashwave art by altered imagery of ancient Greco-Roman sculpture, is an illusion.

Historian of fascist propaganda and aesthetics Ruth Ben-Ghiat writes in Fascist Modernities that both Mussolini and Hitler looked back at the art of ancient civilizations to draw on their symbols. They offered marble bodies as a vision of rehabilitated masculinity to a society devastated by a post-war crisis of confidence.

“The stability and monumentalism of these male heads and male torsos is comforting to young men as a model of a great man. A warrior — the beautiful, perfect male who is ‘European,’” Ben-Ghiat told Mic in an interview. “The joke is that the purity never existed in these cultures, so it’s quite a fantasy, but it’s a compelling fantasy.”

To take these statues on as symbols of long-lost white greatness plays on long-held historical misreadings of European history. As art critic Ben Davis told Mic, Greek sculpture was often gawdy, covered in color and bedazzled with gemstones. Even the premise that these ancient civilizations were “white” in the modern sense is tenuous.

“These disconnected, alienated, rootless people are literally typing in ‘great European art’ and taking these images on as an identity,” Davis said of the fashwave artists. “But these are the most classic, tourist clichés of art.”

In fact, reverse-engineering fashwave artwork often proves Davis’ thesis. Several images posted as original fashwave art were found by Mic to be plagiarized from other digital artists, with light colorization effects added and neo-Nazi imagery superimposed. Like any propaganda, the art itself is cheap. Still, nestled in the inherent contradictions is an authentic expression of the surrealist dread and alienation that provides the foundation for hate to thrive.

There is a futurism in this art, insofar as it is stylized as a 1980s retro-futurism, featuring DeLoreans and Tron-like virtual landscapes. Fascist art is typically full of contradictions, Ben-Ghiat said. It looks helplessly at the past for a vision of the future.

There’s one recurring character that stands out in the busy nest of neo-Nazi iconography and impossible landscapes: a small, lone traveller in the foreground of the image, a solitary hero facing down some unconquerable threat. Without a clear proposition of the future, Ben-Ghait observes, fashwave supposes that the challenge ahead is insurmountable, and that the road to oblivion is taken without company.

The motivating ethos of fashwave, then, perhaps isn’t described best by the bold proclamations that “tradition is not the worship of ashes, but the preservation of fire.” Maybe it would best be served by an image of a lone astronaut, standing mournfully in a field of flowers, looking up at the sky in some illusory utopia, with the caption: “Homesick for a place I’m not even sure exists.”