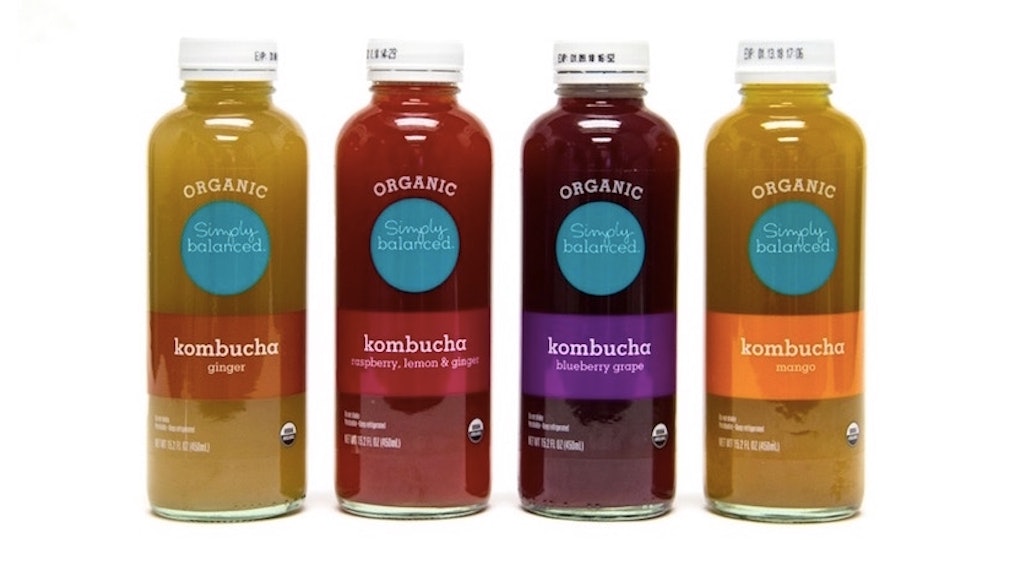 Now that Target has its own line of kombucha, should everyone be drinking it?

Once a food item hits Target’s shelves, it’s pretty safe to call that product mainstream. The big-box retailer introduced its own brand of kombucha, a line called Simply Balanced, to some stores in late 2017 and made the product available nationwide soon after. With close to 2,000 Target stores across the U.S. and a price tag of $2.79 per bottle — cheaper than most store-bought kombuchas — virtually any American can hop on the booch trend if they so please.

A fermented tea made from a combination of tea, sugar, bacteria and yeast, kombucha has been consumed for thousands of years. Today, it’s often revered as a health-minded hipster drink. The beverage has been touted as a disease-fighting elixir, capable of remedying everything from digestion issues to depression to diabetes. It’s also worshiped for its high content of probiotics, these incredibly en vogue bacterium that have been shown to benefit gut health. While kombucha contains alcohol (because of the fermentation process), bottled versions with less than 0.5% alcohol can be sold to anyone.

But the science to back the power of kombucha is hardly all there, and it continues to weaken as brands tweak their recipe for the masses — most probiotics are not shelf-stable. Sadly, this is the typical cycle of a health-food trend.

Marketers have given kombucha the health halo treatment, a psychological phenomenon and marketing tactic that leads consumers to believe a product is good because of one claim, without considering other aspects of the food.

Even before it gained mainstream status, kombucha’s benefits weren’t entirely substantiated. Certain kombucha drinks — ones that are unpasteurized — contain probiotics that can help keep the immune system healthy. Studies in animals have shown the beverage can help lower both cholesterol and blood sugar levels, but the same findings haven’t been replicated in humans.

“I’m not against kombucha — I like the idea of getting probiotics into you,” Frank Lipman, founder and director of the Eleven Eleven Wellness Center, said in a phone interview. “What I’m always scared of is what happens when it gets marketed like this, when the benefits get overplayed.” Lipman said that when the drink is pasteurized — a process used to kill off potentially harmful organisms — it loses a lot of its beneficial probiotics, since the pasteurization can’t decipher between good and bad bacteria.

“My feeling is that the more food is altered, the more it becomes a problem.” — Dr. Frank Lipman

When a brand like Target dips its toe into the kombucha market, it’s largely because it looks profitable: Between 2012 and 2017, the number of kombucha product launches soared, showing an average annual growth rate of 32.7%, according to analysis from Innova Market Insights.

But not all kombucha is created equal, and it seems manufacturers are thinking less about the quality of the ingredients they’re pushing and more about the number of bottles that are sold. Makers have altered some of kombucha’s qualities to increase its palatability for the masses.

Kombucha brewed in home kitchens that follow a basic recipe tend to taste a bit funky, tart and vinegary — hardly reminiscent of popular soft drinks, save for the carbonation. But Target’s version, for example, is sweet. Lipman said that generally speaking, he would avoid drinking kombucha that has more than 4 grams of sugar in the bottle. All kombucha calls for some sugar, the ingredient the yeast feeds off of, but excess sugar is added to the mixture to alter taste.

One bottle of Target’s Simply Balanced blueberry grape variety contains 17 grams of sugar — 15 of which are added, according to the nutrition label. This kombucha doesn’t appear to be unpasteurized (a spokesperson for Target couldn’t confirm), nor is it certified raw, a distinction that means “most, if not all, of the ingredients that went into brewing [the] kombucha are 100% raw and never pasteurized, cooked, chemically processed or altered in any other other way,” Callie Tayman, public relations director at Health-Ade Kombucha, a popular unpasteurized brand, said in an email.

Target’s kombucha drink gets its probiotic content after the fact: Lactospore, a commercial probiotic that doesn’t require refrigeration, is added to the beverage. There are benefits associated with Lactospore, like mitigating certain gastrointestinal issues, but whether it provides the same effects as the bacteria in unpasteurized kombucha has yet to be determined.

“My feeling is that the more food is altered, the more it becomes a problem,” Lipman said, explaining that while he believes kombucha has the potential to be healthful, that potential decreases the more the drink strays from its original formula. “I’m always fearful [that] once you start tampering with the taste, you start tampering with the actual probiotic content,” he said.

Beyond kombucha, foods like sauerkraut, kimchi, yogurt and sourdough bread are natural sources of probiotics. If you want to ride the probiotic train, you might add those your diet — and consume fewer products that contain added sugars.