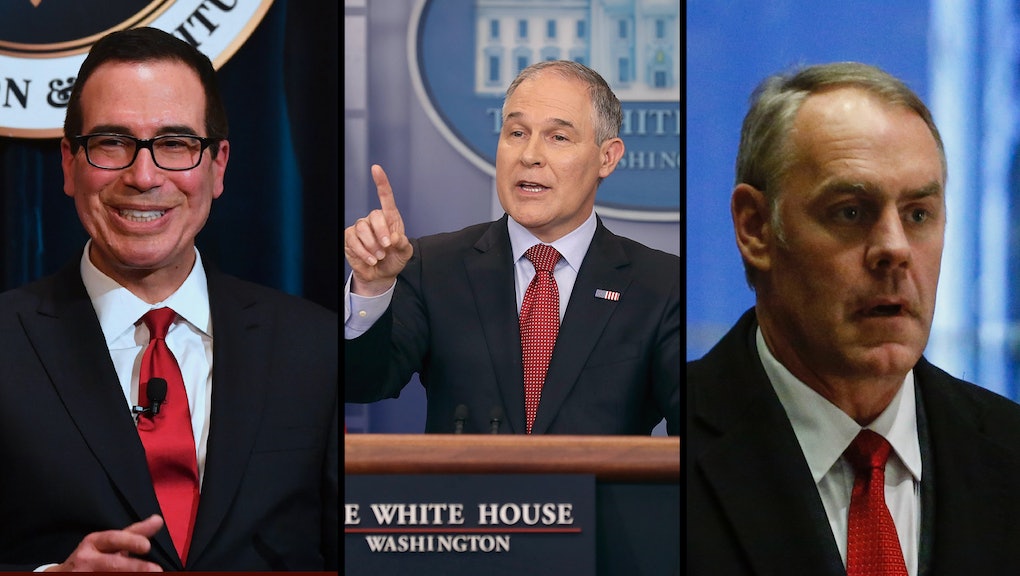 While you weren’t looking: 5 stories from the Trump administration that aren’t about “shitholes”

This week the media was roiled by the revelation that the president of the United States argued against accepting immigrants from what he reportedly called “shithole countries” in Central America, Africa and the Caribbean, arguing instead for more immigrants from countries like Norway.

But as the nation struggled to define what constitutes overt white nationalism, Trump’s cabinet continued to make drastic policy changes that will affect millions of Americans. Here’s what you might have missed.

During the 2016 election, Trump famously asked minority voters “what do you have to lose?” in supporting his candidacy.

Now the Treasury Department, under the direction of Steven Mnuchin, is looking to change regulations to make it easier for banks to engage in redlining — a practice by which poor, often overwhelmingly minority communities were cut off from access to vital credit.

The department is seeking changes to the enforcement of the Community Reinvestment Act, a bill passed in 1977 to help prevent redlining.

Community groups warn that changes to the law could prevent poor and minority communities from gaining access to loans while banks turn their attention to wealthier clients.

The Environmental Protection Agency is reportedly considering allowing minors to handle dangerous chemical materials while on the job. Yes, that’s minors with an “o” not miners with an “e.”

The EPA is currently weighing whether to roll back a series of 2015 regulations, including one rule that prohibited anyone under the age of 18 from working with dangerous pesticides.

The rule was based on the medical community’s warning that early exposure to chemicals in pesticides can lead to developmental issues and even cancer.

But the Trump administration could soon decide that individuals who aren’t old enough to drink or vote are in fact old enough to weigh those risks themselves.

In a historic change for one of the nation’s largest entitlement programs, the Trump administration is now allowing states to radically alter the way they administer Medicaid — including allowing them to add work requirements for the first time ever.

New guidance issued Thursday by the Centers for Medicare and Medicaid Services will allow states to restrict their Medicaid programs to those who have a job, are in school or are participating in some kind of approved form of “community engagement.”

States would not be allowed to apply those new requirements to children, pregnant women, persons with disabilities or the elderly.

The state of Kentucky has already been given the green light to implement the new requirements and, amazingly, will be able to apply them retroactively to people already covered by the program.

Trump once again has first amendment advocates concerned with a new pledge to re-examine U.S. laws around libel and defamation.

“We are going to take a strong look at our country’s libel laws, so that when somebody says something that is false and defamatory about someone, that person will have meaningful recourse in our courts,” Trump told reporters during a cabinet meeting at the White House.

Trump has repeatedly pledged to make America’s libel laws stricter — even as he repeatedly attacks and defames his detractors on social media with reckless abandon.

The latest call for stricter libel laws comes just days after Trump’s personal lawyer filed suit against BuzzFeed over their decision to publish the infamous Trump-Russia dossier, and less than a week after the release of an explosive book about the early days of the Trump administration infuriated the president and his allies.

Last week, the Interior Department was moving ahead with a controversial plan to allow offshore drilling in the U.S., despite the objections from local officials in coastal communities.

This week, the Interior Department decided to listen to one of those local officials — the one who just happens to be an ardent Trump supporter.

Interior Secretary Ryan Zinke announced on Tuesday that he’d be reversing the decision for the state of Florida in response to concerns from Republican Governor Rick Scott.

“I support the governor’s position that Florida is unique and its coasts are heavily reliant on tourism as an economic driver,” Zinke said in a statement.

Other coastal state governors affected by the decision — most of them Democrats — immediately asked why their unique coastal communities didn’t warrant similar consideration, only to be met with deafening silence from the Interior Department.

Florida, a notorious swing state, has statewide elections for both its governorship and a U.S. Senate seat this year.