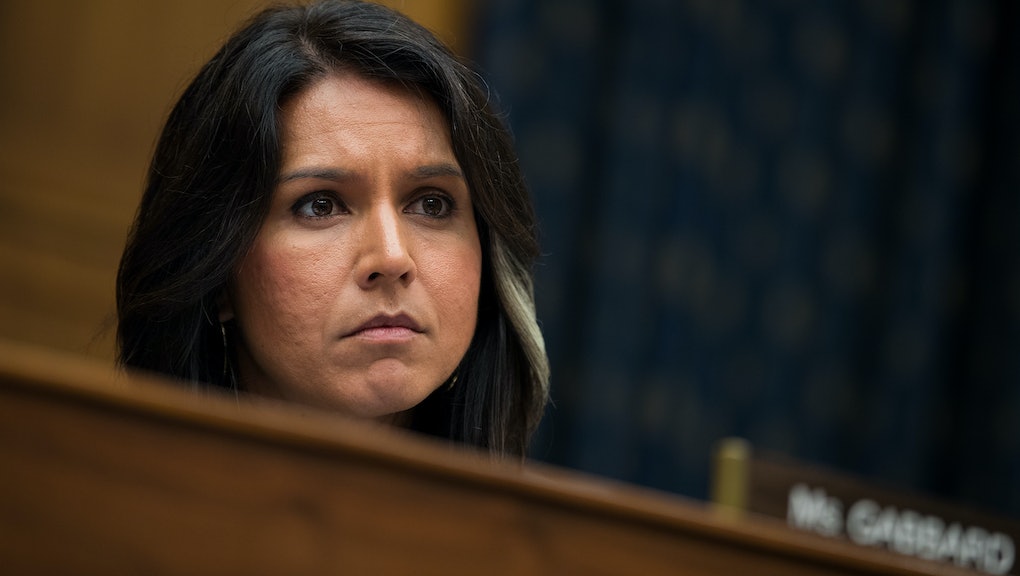 Residents and visitors to Hawaii Saturday were shocked by an alert warning of an inbound ballistic missile — and though it turned out to be a false alarm, one of the island’s congressional representative is making it clear the incident proves the need for a diplomatic solution with North Korea.

Hawaii Rep. Tulsi Gabbard appeared on CNN’s State of the Union Sunday to discuss the “traumatic” false alarm, saying that it “highlights a stark reality that the people of Hawaii are facing” as Trump escalates tensions with North Korea.

The potential for a false alarm to have far more dire consequences “really highlights the global consequences of what Hawaii just went through yesterday,” Gabbard pointed out.

“This is not just about what happens in Hawaii, and this is where I really hope that people across the country, that leaders here in Washington, are paying attention to what people went through and what the consequences of that can be,” Gabbard said, highlighting both the “very direct nuclear threat from North Korea” and the ongoing nuclear threat from Russia.

“Understanding what is at stake here — we’re talking about nuclear war and the threat of nuclear war hanging over our heads,” she said. “It’s not just the president making a decision to launch a nuclear weapon. It’s these kinds of mistakes that we have seen happen in the past that bring us to the brink of nuclear war that could be unintentional, and that’s really what is at stake for the people of Hawaii.”

In addition to fixing the circumstances that caused the false alarm, Gabbard stressed the importance of “get[ting] to the underlying issue here of why are the people of Hawaii and this country facing a nuclear threat coming from North Korea today, and what is this president doing urgently to eliminate that threat.”

The member of Congress has previously called on President Trump to address the nuclear situation in the wake of the false alert, saying the president must “get rid of this nuclear threat from North Korea” in an interview on MSNBC. On Sunday, Gabbard elaborated on how she believes the president can temper the nuclear threat, pointing to the need for a diplomatic solution that will allow the U.S. to negotiate with North Korea and address the underlying reasons for the isolationist nation’s tight grip on its nuclear arsenal.

“I’ve been calling on President Trump to directly negotiate with North Korea, to sit across the table from Kim Jong Un, work out the differences so that we can build a pathway toward denuclearization to remove this threat,” Gabbard said.

“There [are] a few things that have to happen in order for those negotiations to be successful,” she continued. “First of all, they have to happen without preconditions. And this has been a learned lesson from the decades of failed leadership that the people of Hawaii are paying the price for now, where they set these unrealistic preconditions. For example, saying, ‘North Korea, we’re only going to talk to you if you first get rid of your nuclear weapons.’ What would be the point of having a conversation if they get rid of their nuclear weapons? There would be nothing to talk about at that point.”

The second issue in the North Korean conflict, Gabbard added, “is understanding why North Korea has developed and is holding on so tightly to these nuclear weapons, because they see it as the only deterrent from the U.S. coming in and overthrowing their regime there.”

Trump has yet to address the false alarm, which caused widespread panic in Hawaii until it was reported to be untrue. The president has previously criticized Sec. of State Rex Tillerson for urging a diplomatic solution with North Korea and continues to issue vague threats hinting at the possibility of nuclear escalation on Twitter.

United Nations ambassador Nikki Haley said earlier in January that “a lot of things have to happen” before the U.S. would negotiate with North Korea, including the preconditions that Gabbard criticized, though she didn’t assuage fears that the U.S. could be closer to nuclear war with North Korea.