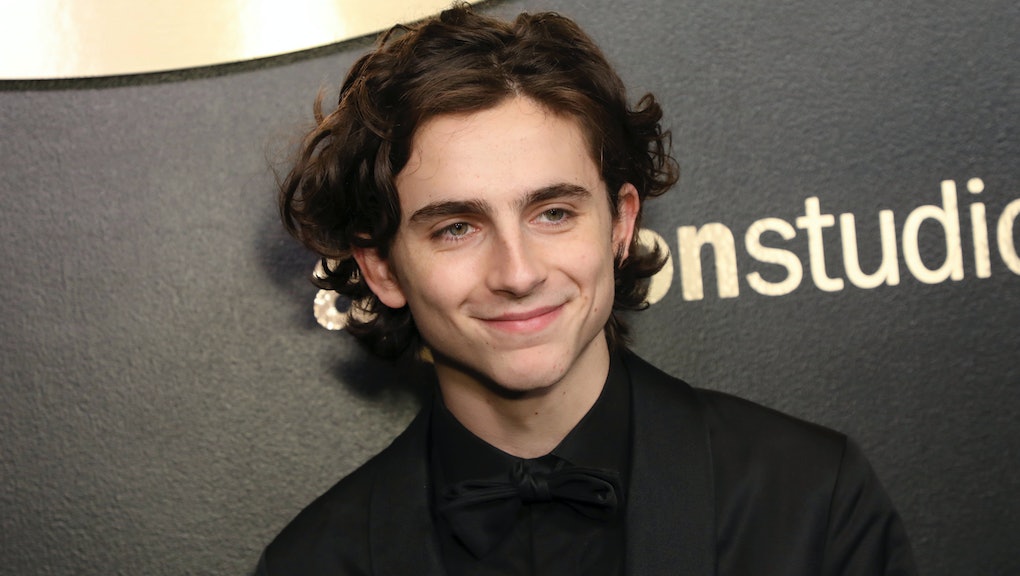 Call Me By Your Name star Timothée Chalamet, 22, announced in an Instagram post Monday night that he plans to donate his entire salary from an upcoming Woody Allen film, in which he acted over the summer, to three organizations: the Time’s Up initiative to combat workplace sexual harassment; the Center in New York, an LGBTQ community organization; and RAINN, an anti-sexual violence group.

“This year has changed the way I see and feel about so many things. ... I am learning that a good role isn’t the only criteria for accepting a job,” Chalamet said on Instagram. “I have been asked in a few recent interviews about my decision to work on a film with Woody Allen last summer. ... What I can say is this: I don’t want to profit from my work on the film.”

The Allen film in which Chalamet will appear, A Rainy Day in New York, also stars Jude Law, Elle Fanning and Selena Gomez, and is due for release sometime in 2018. A Rainy Day in New York has been making headlines for several months, following reports that the movie’s plot involves a relationship between characters played by Jude Law, who is 45, and Elle Fanning, who is 19. Rebecca Hall, who also appears in the film, recently announced herself that she planned to donate her salary from the film and expressed regret at her decision to work with Allen.

Chalamet didn’t specifically mention the allegations against Allen by his daughter, Dylan Farrow, who says that the director sexually abused her as a child, nor did Chalamet expressly rule out the possibility of working with Allen again.

His announcement comes just after Greta Gerwig, who directed Chalamet in Lady Bird, told the New York Times about her own regrets in working with Allen and said definitively that she would not do it again. With Gerwig and Chalamet, both high-profile figures in the 2017-2018 awards season, distancing themselves from Allen — who has long denied the allegations against him — it seems possible that the #MeToo moment may finally be catching up with Allen.

However, there are still a number of stars, some of whom donned Times Up pins at the most recent Golden Globe Awards, who have starred in Allen films and have remained quiet about the allegations against him.