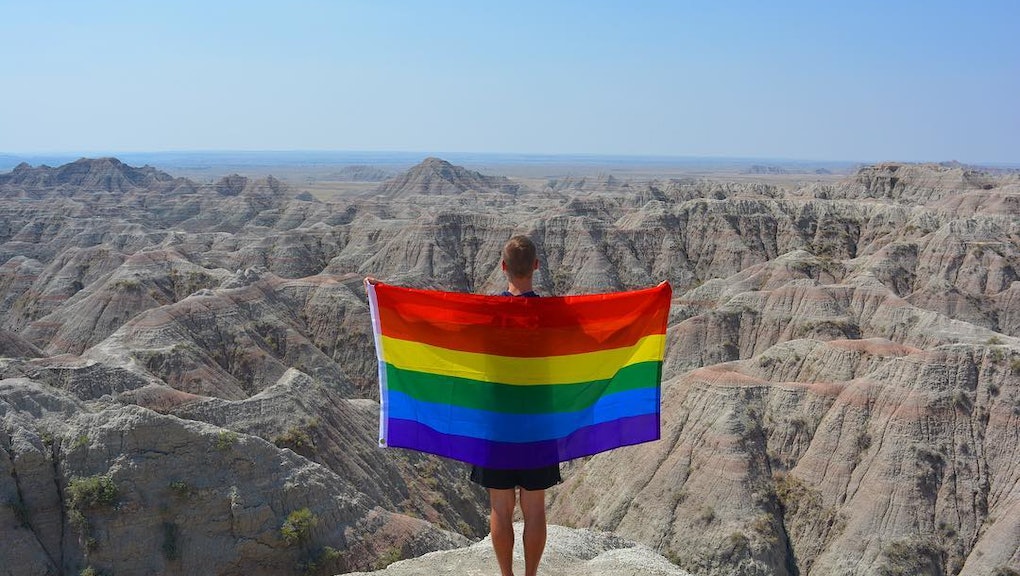 It’s been 21 straight months on the road for 31-year-old Mikah Meyer. He “stealth camps” by parking his 2014 Ram Pro Master cargo van — nicknamed “Vanny McVanface,” in abandoned parking lots in order to get some sleep. Meyer’s on a quest to be the youngest person to visit all of the National Park Service’s 417 sites in one epic trip to honor his father Larry, a pastor who died of cancer in 2005.

Meyer’s cross country adventure looks positively dreamy on his Instagram and blog. He’s posted jaw-dropping sunsets in Missouri, picturesque mountain views from the Rockies, close encounters with moose in Colorado, zip lining in Puerto Rico and more. Vanny McVanface has clocked 63,000 miles, and Meyer expects the van will have close to 100,000 when the trip concludes at the Lincoln Memorial on April 29, 2019, the 14th anniversary of his father’s death.

But his vibrant photos, often featuring smiling selfies, only tell part of the story. While Meyer knew he’d need help from sponsors to financially sustain his road trip dreams, the sponsorships came at a cost: He believed he’d have to obscure his identity on social media to gain support from businesses.

“Seeing how heteronormative the outdoors industry is, I straight-washed myself for nearly the first year in hopes of fitting the established mold,” he said, explaining that he had a habit of lowering his voice on the phone with sponsors, omitting photos of his then-boyfriend on his feed and saying he hoped to make the National Parks more “diverse” instead of saying “LGBT.” Meyer said he’d never seen someone like himself, an openly gay man, in an outdoor retailer ad, and he didn’t feel ready to shake things up. “I was terrified that if people knew [my sexuality], they would miss the forest for this gay tree,” he noted.

“I was terrified that if people knew, they would miss the forest for this gay tree.”

But Meyer is a practicing Christian, and after receiving questions from a teen about what it meant to be a gay Christian, he had a come-to-Instagram moment. It was time to stop hiding parts of his identity on social media.

“I realized I needed to set aside any of my personal gain in order to be a positive role model for others like him,” Meyer said. “The stereotype is that gay people are on the beach drinking alcohol. ... So much of the culture is promiscuity. We’re as diverse as any other people.”

Waving the pride flag high didn’t come without consequences. By the end of 2017, one sponsor ended its partnerships with Meyer. “It was so sudden and such a change of course ... all I can assume is that one board member didn’t like what I was doing. Losing that sponsor shows being LGBT is controversial enough that people can’t be associated with someone who is openly gay.”

Nevertheless, he says the flag photos are some of his most popular on Instagram, and the support keeps pouring in from followers who say they are ecstatic to see a person like themselves in the outdoors.

Using hashtags like #PrideOutside have helped him rack up followers in search of more diverse content. And their support has fueled Meyer to explore incredible secrets hidden among the National Park sites — including places like Dinosaur National Monument. “Nobody knows about it” because it’s not one of the 59 standard National Parks, Meyer said, noting that more popular sites like Yellowstone (“smelled like farts the whole time”) can be crowded.

On Wednesday, Meyer reached Alibates Flint Quarries National Monument, site No. 278 of the 417 he intends to visit, meaning his trip is two-thirds of the way complete. “It’s kind of like a giant chess game, because I have to think so many moves in advance,” he said, explaining that he has every site visit planned out, including the expensive bush planes he’ll need to take to visit fourteen sites in Alaska.

“[My father’s] death really imparted this lesson to me that we aren’t all going to make it to 65,” he said. “If there are things with our life that we want to do, we have to do something about it sooner,” he said.

Meyer said he’s hoping to “flip the script” on religion and sexuality, too.

“I have had churches tell me I wouldn’t be allowed to share my story of growing up feeling unwanted by the church,” he said, explaining that, now, he’s been able to connect with at least one LGBT-friendly church in every state that wants Meyer to spread acceptance within its community. And every stop Meyer makes is a stepping stone to becoming the youngest person to ever visit all 417 National State Park sites — and the only person to ever do it in a single trip.