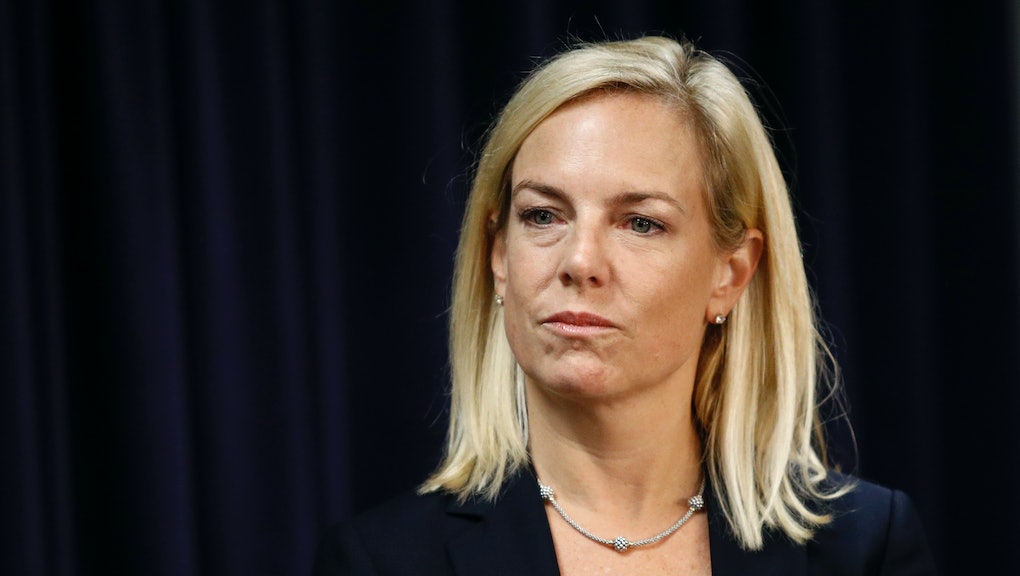 Department of Homeland Security Secretary Kirstjen Nielsen refused to confirm that President Donald Trump called Haiti and African nations “shithole countries,” and instead repeatedly insisted that she either doesn’t remember or didn’t hear that controversial remark.

Nowhere in Nielsen’s Tuesday testimony before the Senate Judiciary Committee did she explicitly deny that Trump called those countries shitholes during a Thursday meeting on immigration reform at the White House. Rather, she twisted herself into a knot to avoid confirmation that Trump specifically used that inflammatory language.

“You were in the room, you’re under oath, did President Trump use this word or a substantially similar word to describe certain countries,” Sen. Patrick Leahy (D-Vt.) asked.

“I did not hear that word used, no sir,” Nielsen said.

When Leahy reminded her that he also wanted to know whether Trump used a similar word, Nielsen again dodged.

Sen. Dick Durbin, the Illinois Democrat who was in the meeting and insisted Trump called the nations “shithole countries,” also had a turn to question Nielsen. She obfuscated just as much during Durbin’s line of questioning.

“Let’s see, the strong language, there was, uh, apologies I don’t remember a specific word,” Nielsen said, going on to say there was “profanity” being used in the room by “almost everyone.”

“Did you hear me use profanity?” Durbin said.

“No sir,” Nielsen replied, before going on to accuse Sen. Lindsey Graham (R-S.C.) of using profanity in the meeting.

But Durbin was quick to defend Graham, saying he was merely repeating “exactly what the president had said.”

“I will just say for the record, Sen. Graham spoke up in a way that I respect very much — countering what the president had said about countries in Africa, reminding the president that his family did not come to America with great skills or wealth, but they came here as most families do, looking for a chance to prove themselves and make this a better nation,” Durbin said. “And in defense of Sen. Graham, his strong words repeated exactly the words used by the president, which you cannot remember.”

Nielsen then tried to explain Trump’s position on moving the U.S. to a merit-based immigration system, which prioritizes accepting immigrants based on their skill sets rather than country of origin.

“What I heard him saying was that he’d like to move away from a country-based quota system to a merit-based system, so it shouldn’t matter where you’re from, it should matter what you can contribute to the United States,” Nielsen said.

But even her defense of that didn’t add up, given that she confirmed Trump pushed for accepting more immigrants from countries like Norway — which directly contradicts his reported desire to accept immigrants based on skill rather than country of origin.

“Do you remember the president saying expressly, ‘I want more Europeans. Why can’t we have more immigrants from Norway?” Durbin asked Nielsen.