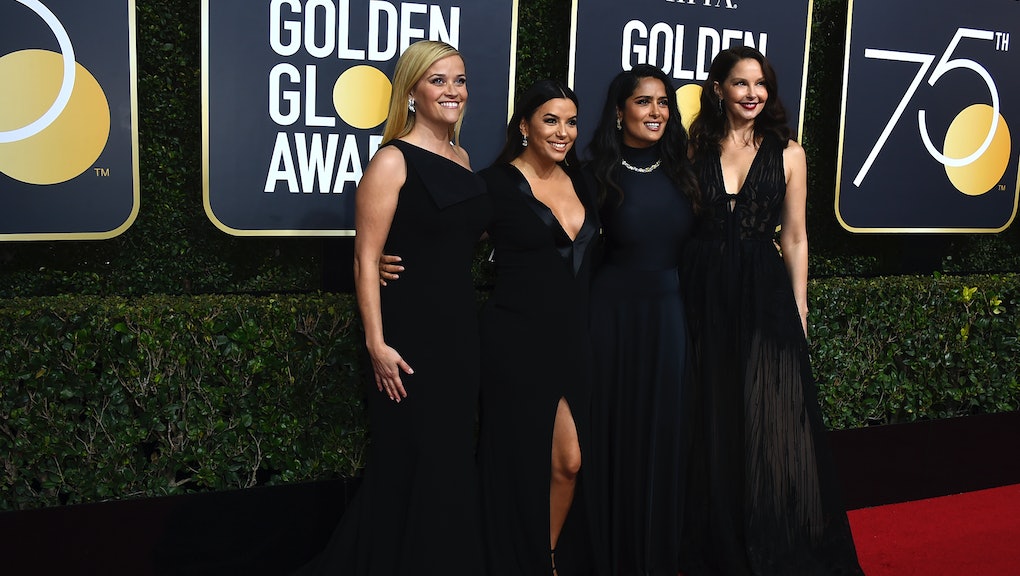 Actresses and actors made history at the 2018 Golden Globes by turning the red carpet into an undeniable political statement. Draped in all-black ensembles as a sign of protest against sexual harassment and assault in Hollywood and beyond, it was the first time that a vast majority of Globes attendees used fashion to make such an overt political point.

Now, less than two weeks after the show, you have an opportunity to own a bit of this red carpet history yourself — and help raise funds for the Time’s Up Legal Defense Fund while doing so.

On Wednesday morning, publisher Condé Nast announced that it has teamed up with eBay and Time’s Up to auction off a few of the black dresses — and tuxes — worn at the Golden Globes, with all funds raised going to the Time’s Up Legal Defense Fund, which helps connect people who encounter workplace sexual harassment with proper legal representation and assistance.

“At Condé Nast, we’ve always believed in the importance of swift action to support meaningful social change,” Anna Wintour, the artistic director of Condé Nast and editor-in-chief of Vogue, said in a press release. “Through this auction powered by eBay, and harnessing the compelling pull of both fashion and activism, we’re hopeful that the black dresses worn at this year’s historic Golden Globe Awards will raise funds for the Time’s Up initiative, and serve to support the stories and voices of those who have been victims of sexual misconduct.”

Among the dresses being auctioned off, which have been donated by the designers themselves, are Reese Witherspoon’s Zac Posen dress, Salma Hayek’s Balenciaga dress, Viola Davis’ Brandon Maxwell dress, Nicole Kidman’s Givenchy dress, Meryl Streep’s Vera Wang dress and Tracee Ellis Ross’ Marc Jacobs dress, among many others.

The auction itself begins on Friday on Ebay. Additionally, three of the designer outfits from that night — Claire Foy’s Stella McCartney, Madeline Brewer’s Diane von Furstenberg and Mandy Moore’s Rosie Assoulin — will be available through a sweepstakes. EBay users can donate $25 to the Time’s Up Legal Defense Fund for a chance to win the ensemble of their choice.

“Celebrating, safeguarding and increasing diversity and inclusion is a value that is core to eBay’s culture — as an employer and as one of the world’s leading commerce platforms,” Devin Wenig, the president and CEO of eBay, said in the release. “As a company that supports gender pay equity and believes strongly that workplace environments should be free of offensive and hurtful behavior, we are proud to partner with the Time’s Up Legal Defense Fund and Condé Nast to raise funds for this important cause.”

This auction comes at a time when Hollywood is already trying to figure out how to fight sexual harassment in the workplace beyond just red carpet protests. Right before the Golden Globes, 300 actresses and women talent agents, writers, directors, producers and entertainment executives came together to announce the Time’s Up initiative, which focuses on combatting workplace harassment beyond Hollywood and across the socioeconomic spectrum.

Clearly, this is a movement that’s just getting started.