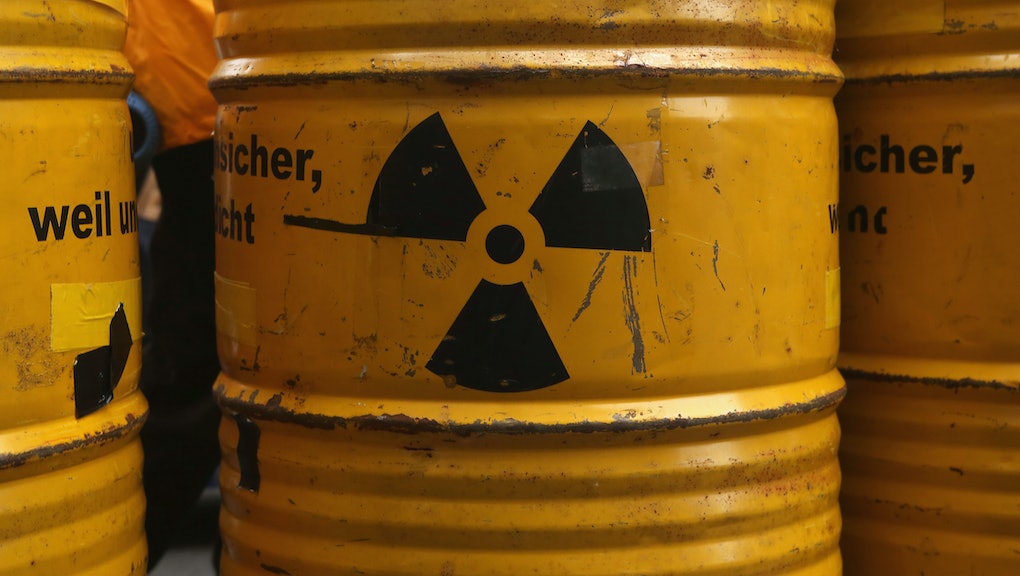 The Trump administration lays out plans for an increased nuclear arsenal

As tensions with North Korea escalate the threat of nuclear war, the Trump administration is now set to release a new document that goes beyond the president’s Twitter threats to clarify the United States’ nuclear strategy.

The Nuclear Posture Review, a legislatively-mandated review from the U.S. Department of Defense, “establishes U.S. nuclear policy, strategy, capabilities and force posture,” according to the Department of Defense. The review, which is undertaken every five to 10 years, was last issued in 2010 under President Barack Obama.

The Trump administration is set to release the updated NPR in February — and a draft released by HuffPost on Jan. 11 revealed that the administration’s new policy puts a heavy emphasis on maintaining and improving the nuclear arsenal.

“U.S. nuclear capabilities cannot prevent all conflict, and should not be expected to do so,” the draft report notes. “But, they contribute uniquely to the deterrence of both nuclear and non-nuclear aggression. They are essential for these purposes and will be so for the foreseeable future.”

In a statement, the Pentagon did not deny the authenticity of the published draft, saying only that the review had not been completed and the agency would “not discuss pre-decisional, draft copies of strategies and reviews.”

The increased emphasis on the U.S. nuclear program reflects Trump’s rhetoric. In addition to his frequent Twitter outbursts bragging about the size of his nuclear button and issuing vague threats to North Korea, the president has expressed desire for a “tenfold increase” in the nuclear arsenal. He called for a nuclear “arms race” in a December 2016 appearance on Morning Joe.

Though the draft of the report puts a heavy focus on the importance of nuclear weapons, it also takes a more tempered tone than Trump. It emphasizes deterrence, and explains that the country “remains committed to its efforts in support of the ultimate global elimination of nuclear, biological, and chemical weapons.”

“This is clearly not Trump’s policy,” Jon Wolfsthal, director of the Nuclear Crisis Group and former senior director at the National Security Council for Arms Control and Nonproliferation, told the Huffington Post. “And that will reassure people who hope and pray that the axis of adults is somehow going to constrain President Trump’s impulses.”

Yet, the escalated actions the NPR describes could still have a dangerous effect.

Replacing and improving the nuclear arsenal and infrastructure

Despite the NPR’s statement of support for the elimination of nuclear weapons, its proposed policies instead indicate initiatives to replace, maintain and even expand the country’s nuclear program.

“The current threat environment and future uncertainties now necessitate a national commitment to maintain modern and effective nuclear forces, as well as the infrastructure needed to support them,” the draft report states.

As part of the effort, the NPR calls for the government to sustain and replace its nuclear triad and non-strategic nuclear capabilities, declaring that “there is no higher priority for national defense.”

The strategy outlined by the NPR will go beyond simply sustaining the country’s current arsenal, however, as the review also calls for the arsenal to be “supplemented” by additional low-yield missiles. These are intended to enhance deterrence by denying potential adversaries any “mistaken confidence,” the report stated.

In practice, however, these supplemental missiles might not have the beneficial effect the report claims. The U.S. already has over 1,000 nuclear warheads with low-yield options, according to the Federation of American Scientists, and expanding them could be a “slippery slope” that makes it more likely they will be used in combat. The strength of a low-yield missile would rival the strength of the atomic bombs dropped on Japan during World War II, Business Insider notes.

In addition to these enhancements to the nuclear arsenal, the report also includes a call to modernize the Nuclear Command, Control, and Communications system that keeps the president connected to military forces in the event of a nuclear attack. It also calls for other improvements to the nuclear infrastructure — including producing new plutonium pits that would enable the creation of new nuclear weapons.

The NPR’s proposed improvements stand in stark contrast to past administrations, who have sought to reduce, rather than supplement, the nuclear stockpile. Some Republican leaders have typically favored downgrading the arsenal; former President George H. W. Bush cut the nuclear stockpile by nearly 9,500 warheads, while George W. Bush more than halved the arsenal, bringing it down to 5,000 warheads.

These improvements will also come at a cost: The Congressional Budget Office projected in October 2017 that Trump’s proposed overhaul of the nuclear program would carry a price tag of $1.2 trillion, while the New York Times noted that the expanded plan outlined in the NPR will likely be even pricier. The draft review projects that the cost to “sustain and replace U.S. nuclear capabilities” will take up approximately 6.4% of the current defense budget at the most, as compared to the 2 to 3% of the budget currently dedicated to maintaining and operating the nuclear program.

When the U.S. will use its nuclear arsenal

According to the NPR draft, it may not take a nuclear strike from another country to get the U.S. to use its nuclear arsenal.

“To help preserve deterrence and the assurance of allies and partners, the United States has never adopted a ‘no first use’ policy and, given the contemporary threat environment, such a policy is not justified today,” the report notes.

Though the NPR explained that it “remains the policy of the United States to retain some ambiguity regarding the precise circumstances that might lead to a U.S. nuclear response,” it adds that the country would only consider using nuclear weapons “in extreme circumstances,” which could include “significant non-nuclear strategic attacks.”

Such non-nuclear attacks could include crippling cyberattacks that would target the power grid, cell phone networks or the internet. Any conflict between major powers such as the U.S., China and Russia, the Times report explained, are likely to begin with a “lightning strike on space and communications systems.”

Despite Trump’s tweets about the nuclear “button,” the report also makes it clear that should an attack be ordered, the nuclear arsenal couldn’t be deployed with a single click.

“U.S. ICBMs [intercontinental ballistic missiles] are not on ‘hair-trigger alert,’ as sometimes mistakenly is claimed,” the report notes. “Over more than half a century, the U.S. has established a series of measures and protocols to ensure that ICBMs are safe, secure, and under constant control. Any U.S. decision to employ nuclear weapons would follow a deliberative process.”

NATO and other treaties

Though Trump has taken aim at NATO, the NPR reiterated the U.S.’s support for the 29-member military and political alliance, calling the U.S’s commitment to NATO “unwavering.”

“A strong, cohesive nuclear alliance is the most effective means of deterring aggression and promoting peace and stability in the Euro-Atlantic region,” the report noted.

However, the report makes clear that not all nuclear treaties are acceptable to the U.S.’s interests under this administration. The report states that the U.S. will not ratify the Comprehensive Nuclear-Test Ban Treaty, a global ban on nuclear explosive testing. And the report leaves the door open for U.S. for potential future nuclear tests, writing that the government “will not resume nuclear explosive testing unless necessary to ensure the safety and effectiveness of the U.S. nuclear arsenal.”

The report also does not support the Nuclear Weapons Ban Treaty, which the United Nations adopted in July 2017 as a way to prohibit and ultimately eliminate nuclear weapons. The report describes the treaty as “fueled by wholly unrealistic expectations of the elimination of nuclear arsenals” and decried the agreement as polarizing — and potentially damaging to the security interests of the U.S. and its allies.

Though Trump may be hesitant to criticize Russian President Vladimir Putin, his administration’s nuclear strategy recognizes Russia and its nuclear arsenal as a serious threat.

“While Russia initially followed America’s lead and made similarly sharp reductions in its strategic nuclear forces, it retained large numbers of non-strategic nuclear weapons,” Sec. of Defense Jim Mattis wrote in an introduction to the report. “Today, Russia is modernizing these weapons as well as its strategic systems. Even more troubling has been Russia’s adoption of military strategies and capabilities that rely on nuclear escalation for their success.

The NPR specifically warns against Russia’s policies advocating the possibility of limited nuclear escalation and “nuclear first-use,” which the report notes will be the target of the U.S.’s deterrence strategy against the country.

The report also warns against Russia’s “increasingly diverse and expanding nuclear capabilities,” including an undersea autonomous torpedo. Though the missile has been “widely discussed in defense circles,” the NPR marks the first time that the undersea missile has been publicly acknowledged by the Pentagon as a threat, according to the Times. The powerful missile, which could strike the U.S. guided by artificial intelligence, was first envisioned as a prototype by a Russian physicist in the 1960s.

The Department of Defense acknowledged the ongoing tensions with North Korea in the report, warning that the country “poses a clear and grave threat to U.S. and allied security.”

In its discussion of the U.S.’s strategy in regards to the isolationist nation, the report emphasized the need for a deterrence strategy ensuring the Kim regime will realize the threat the U.S. poses to ending the regime, should North Korea use nuclear force. It also highlighted the U.S.’s abilities to intercept a missile, adding that the U.S. will “continually improve” these capabilities as necessary. Though Sec. of State Rex Tillerson has advocated for a diplomatic solution with North Korea, there is no mention of such a solution in the report.

“For North Korea, the survival of the Kim regime is paramount,” the report stated. “Our deterrence strategy for North Korea makes clear that any North Korean nuclear attack against the United States or its allies and partners is unacceptable and will result in the end of that regime. There is no scenario in which the Kim regime could employ nuclear weapons and survive.”