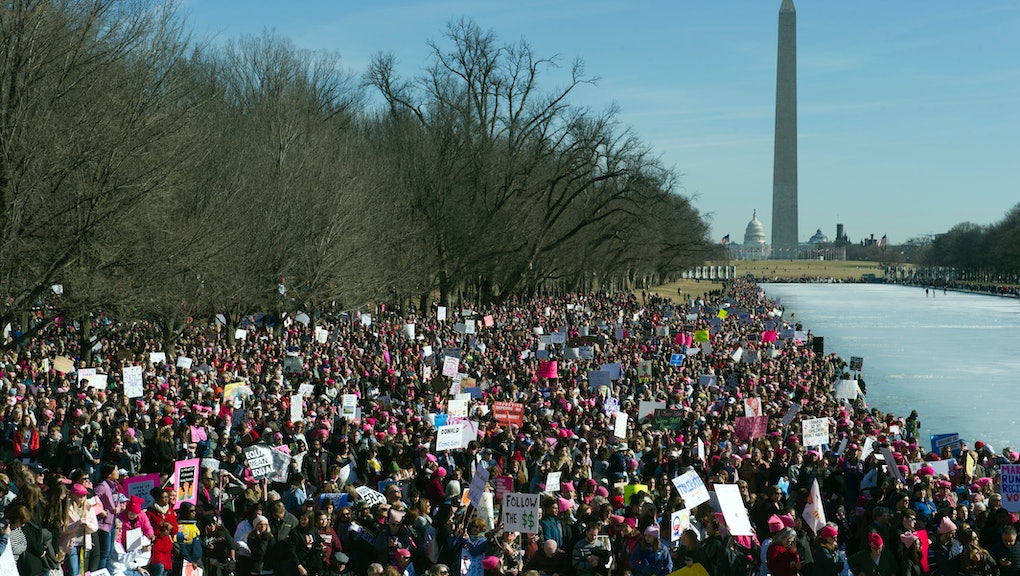 One year into the Trump era, the American left is still growing

In the immediate wake of President Donald Trump’s inauguration there was an explosion of progressive activism across the country. A host of new organizations were created to channel the frustrations of Americans who oppose Trump’s agenda into organized and sustained activism, while older, existing leftist groups had new life breathed into them by the newly energized hoards.

One year later, the enthusiasm and outrage has not waned and nascent movements have matured into full-fledged operations ready to take on the 2018 midterm elections.

There are massive numbers of groups that have either emerged or grown from Our Revolution, the grassroots movement that grew out of the Bernie Sanders presidential campaign, to Run for Something, a group helping young progressives run for state and local office, to Justice Democrats, a group devoted to holding Democrats accountable on left principles, and many more.

But the following groups epitomize the massive growth in left organizing, and their plans for 2018 and beyond are a roadmap to the ways in which the left and the country is changing.

In the year since the Women’s March became the largest single-day protest in U.S. history, organizers have managed to keep the spark alive, crossing the country and ultimately building an inclusive and intersectional movement against sexism and bigotry.

Over the weekend, on Saturday’s anniversary of Trump’s inauguration and Sunday’s one-year marker of the first Women’s March, marches in hundreds of cities across the globe from Washington, D.C., to Rome are demonstrating the continued fervor among the many women and allies who turned out to protest Trump’s presidency in 2017.

The rallying cries of the march have incorporated new political messaging, from attacking congressional Republicans for the government shutdown and their failure to protect DACA recipients, to elevating some of the women who’ve come forward to accuse powerful men of sexual assault in the growing #MeToo movement.

On Sunday, Women’s March organizers will launch a new voter registration movement called “Power to the Polls,” which kicks off with an event in Las Vegas, Nevada, a battleground senate state in 2018.

“We all must commit to fighting the systemic voter suppression laws that inhibit so many of our communities from voting,” Women’s March co-chair Linda Sarsour said in a statement on the group’s website. “This campaign will mobilize a new group of activists to create accessible power to our voting polls.”

The Democratic Socialists of America existed long before 2017, but following the presidential candidacy of socialist Sen. Bernie Sanders (I-Vt.) and the election of Donald Trump the group’s ranks have begun to grow at a rapid click, fueled by a younger generation that increasingly identifies with socialism.

In late 2014, DSA had 6,000 members and about 30-40 chapters across the country. After the Democratic presidential primary in 2016, the number of DSA members more than tripled. And as of November 2017, DSA had more than 31,000 members with 145 chapters or committees to form chapters and another 57 Young Democratic Socialist groups in high schools and college campuses.

In November 2017, 15 DSA members around the country were elected to local office, along with 13 DSA-endorsed candidates who are not official members.

The most notable electoral victory of DSA was the election of Lee Carter to the Virginia House of Delegates. Carter, a veteran, IT specialist and DSA member, was able to oust incumbent Republican State House Majority Whip Jackson Miller by nearly 10 percentage points.

Republican groups attempted to delegitimize Carter by distributing mailers attempting to link the socialist candidate to the legacies of Mao and Stalin. But in the end, voters were able to distinguish between Carter’s democratic socialism and the ideologies of 20th century authoritarian communists, suggesting that the era of red-baiting socialist candidates out of polite discourse may have finally reached its end in 2017.

Going into 2018, DSA is pushing forward with a movement to generate support for a single-payer health care system across the country, and will likely see a host of new socialist candidates running for political office up and down the ballot.

Indivisible began when two former congressional staffers wrote a guide for progressives on how to channel grassroots energy into a sustained movement to pressure elected officials, the way the Tea Party did in 2010.

In the year since, the organization has ballooned to roughly 6,000 groups around the country. In 2017, Indivisible raised more than $8.26 million from between 80,000 and 90,000 donors — many being small dollar donors.

Over the course of the year, the groups tactics have been evolving with new forms of protest and has become a launching pad for several 2018 national and local candidates.

Indivisible cofounder Ezra Levin told Mic about how town hall protests of Republican Rep. Dave Reichert (R-Wash.) over his support for repealing the ACA morphed into a congressional candidacy.

“[Reichert] was the subject of one of the empty chair town halls orchestrated by one of the local area Indivisible groups.” Levin said.

“This new candidate, a pediatrician from the area, jumped in the race to challenge him and her first campaign ad was shots of these empty chair town halls and her standing behind one of these chairs saying, ‘Dave Reichert won’t sit in this chair but I will.’”

That candidate, Dr. Kim Schrier, entered the race, and soon afterwards Reichert announced that he will not seek re-election in 2018.

While the ACLU has been around for almost a century, the touchstone civil liberties organization is in the process of a radical transformation thanks to the massive inflow of support it received following the 2016 election.

In 2017 the group raised $93 million in online donations, up from just $5.5 million the previous year. That influx of cash has motivated the group to reconfigure itself as a more proactive agent within the left, and is will pave the way for an unprecedented new role for the group in electoral politics.

The group also spent much of 2017 doing some soul-searching about its mandate. In August, the group continued its non-ideological commitment to protecting free speech under the first amendment by supporting the free speech rights of white supremacist groups organizing a rally in Charlottesville, Virginia.

When outbursts of violence resulted in the death of counterprotester Heather Heyer at the hands of a white nationalist and turned the Charlottesville rally into an nationally recognized symbol of how hate groups have been emboldened in the Trump era, factions within the ACLU called for re-evaluating the group’s central mission.

While the ACLU continues to grapple with how to carry out its mandate to protect free speech in the era of ascendent white nationalism, the group has largely stayed out of the battles over white supremacists being invited by student groups to speak at college campuses, and has focused its energies on opposing the Trump administration’s xenophobic policies.

In 2018 the group aims to become the “NRA of the left,” with plans to spend more than $25 million supporting their agenda in the 2018 election.