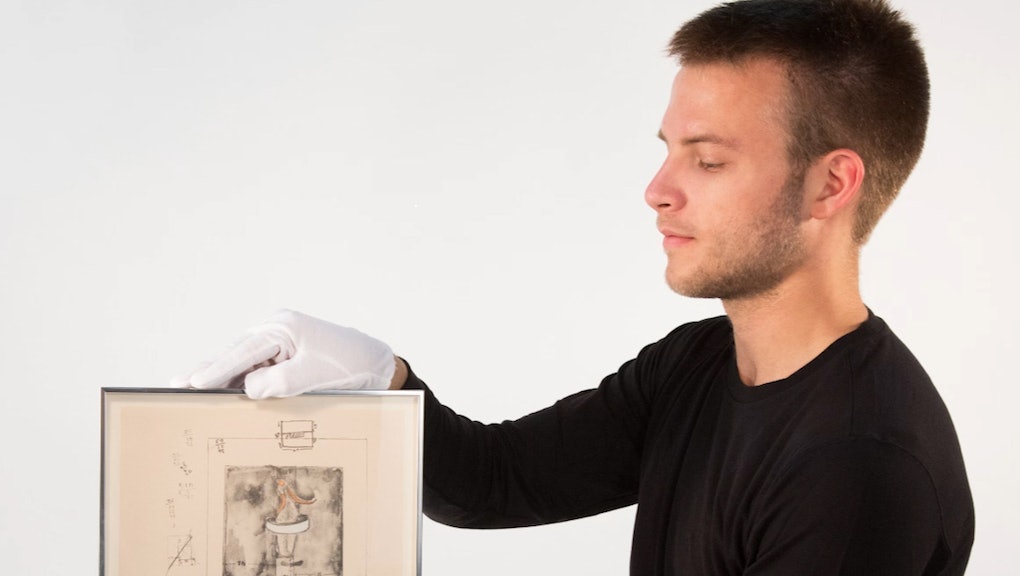 Why this conceptual artist is raising $10,000 to buy and destroy an iconic piece of art

Rich people will spend a lot of money on art, sometimes forsaking quality in the name of a good investment. A controversial example is perhaps the “Salvator Mundi,” a work that was likely painted by the Leonardo da Vinci. It resurfaced in 2005 in an estate sale where it sold for about $10,000, according to the New York Times. A little more than a decade later — and after an “unprecedented” advertising campaign — it sold for a record $450 million.

There are a few reasons why that particular sale is controversial. Some prominent critics don’t even think it’s a real Leonardo da Vinci, for one. The picture was also heavily — and some say badly — restored. The auction house behind the sale also engaged in some games to bump up the price — including the 500-year-old work in a contemporary art auction, for example, to reach a bigger audience, and shipping in celebrities to be filmed observing the work, including Leonardo DiCaprio.

That the price tag of the most expensive piece of art ever sold at auction was so attributable to advertising — some art critics even suggested that the painting was included in a contemporary art sale to avoid scrutiny from collectors who specialize in the classics — has some people wondering whether the art world has lost its way. Are the people who buy art caught up in a speculative frenzy, forsaking any concerns about quality? And if people are buying and selling art without regard to quality, how are the artists themselves to make a living?

The “Salvator Mundi” case captured the imagination of Nikolas Bentel, a New York City-based artist, designer and former ad-man with a residency at the prestigious New Museum in New York City. An irrational art market, he explained in an interview, would not only accommodate irrational acts, it would celebrate them. So he decided to destroy a priceless piece of art, in this case a print by Robert Rauschenberg, a prominent pop artist whose larger works have often sold for millions of dollars.

It had to be a Rauschenberg, he said, because Rauschenberg did a similar thing to the artist Willem de Kooning — whose nearly seven-decade career culminated in the 1940s and earned him the reputation of being an “artist’s artist” — by acquiring and then erasing one of the legendary painter’s drawings. “Erased de Kooning Drawing” currently hangs at the San Francisco Museum of Modern Art. In Bentel’s interpretation, the erasure was meant to illustrate the ascent of pop art and conceptual art to supplant abstract expressionism, then the defining movement of the day.

“Destroying a Rauschenberg is a stupid idea that no one wants, but in an art context, it’s very interesting,” Bentel said alongside his collaborator, Hojae Kim. “I would never destroy someone else’s art, but Rauschenberg has such important context. ... Rauschenberg created a legacy by discussing the previous legacy, so we’re now discussing his legacy by rearranging what he did.”

Bentel said the project occurred to him more than a year ago, though of course Rauschenberg prints are not easy to come by, even if you’re not intending to destroy it. The project really gained steam when Kim, a former Rhode Island School of Design classmate turned collector, bragged about his latest acquisition on social media, a Rauschenberg sketch of one of his most famous sculptures, “Monogram.” “I was not hard to find,” Kim joked.

Over beers at a mutual friend’s birthday party, Bentel pitched Kim the idea, and convinced Kim to sell him the print for $10,000 at the start of what the two now call a collaboration. Since Bentel didn’t have $10,000 handy, the two decided to raise the funds by selling ad space on the destroyed drawing. At a rate of about $90 per square inch, the two have raised roughly 80% of the space so far.

“There’s the aesthetic part to art, but there’s also the economic part that takes place in auction houses,” Kim said. “Sometimes they go together but they’re also hard for artists to talk about. They’re disconnected. ... This was a way to use capitalism in a very transparent way. Capitalism and money are almost the medium.”

Bentel and Kim said they hope the new canvas may end up being worth something in its own right some day, and hope to show it — whatever the piece ends up looking like — in a gallery, though they’re not yet sure how the art world will greet their project.

“There’s something about it that rubs me the wrong way,” Charlotte Pettit, my friend who has worked in contemporary art sales at Phillips and Sotheby’s, said. “Rauschenberg told de Kooning he was doing this, and de Kooning got to pick which drawing was erased. Rauschenberg is not alive anymore, so he can’t give his artistic consent for this.”

Another distinction is the fact that Rauschenberg also didn’t view his project as an act of destruction, Julia Blaut, director of curatorial affairs at the Robert Rauschenberg Foundation, said.

“Certainly the ‘Erased de Kooning Drawing’ has often been viewed by critics as a neo-Dada, destructive gesture,” Blaut said in an email. “Rauschenberg, however, ultimately convinced de Kooning that it was a constructive act and, if all went well, would produce a new work of art — one that de Kooning was complicit in.”

“Rauschenberg was one of the pioneers of art where the idea was almost as important as the execution.”

In Bentel’s defense, it’s only a print — meaning original copies of the work will still remain once Bentel covers his version with ads. In that sense, he is only destroying the piece in a monetary sense. When the project concludes, $10,000 worth of Robert Rauschenberg art will be gone, but a new piece will emerge when the project is completed, one that will hopefully elevate Rauschenberg’s profile, not diminish it. Perhaps for that reason, Blaut’s statement about Bentel’s project was surprisingly favorable, a gesture he said in a follow up email to Mic was “extremely humbling.”

“Then as it is now, appropriation is the best sort of flattery,” Blaut said. “Nikolas Bentel’s use of a Rauschenberg print is evidence that Rauschenberg remains a central figure to young artists today — he is the person to ‘relate to’ and to move beyond.”

Bentel and Kim also said that the reception has been largely positive. A few Rauschenberg collectors have purchased advertising space to fund the project, Bentel said, possibly sensing an opportunity to elevate Rauschenberg’s profile and enhance the value of their own holdings.

For their part, Bentel and Kim hope to make a bigger statement about the increasingly blurred lines between advertising and art, and highlight the crucial role that creative destruction plays in both art and commerce by making way for new concepts and ideas.

“Rauschenberg was one of the pioneers of art where the idea was almost as important as the execution,” Bentel said. “At the end of the day, if this piece is gone — if we just ripped it up and didn’t tell anyone — people wouldn’t care. This act of doing it is what’s important.”

By Feb. 28, Bentel told Mic in an email, the remainder of the advertising space had been sold. He now plans to auction the piece starting March 5, with the bidding starting at $20,000. The proceeds will be used to set up a scholarship at the New Museum’s design incubator to help students cover its costs.