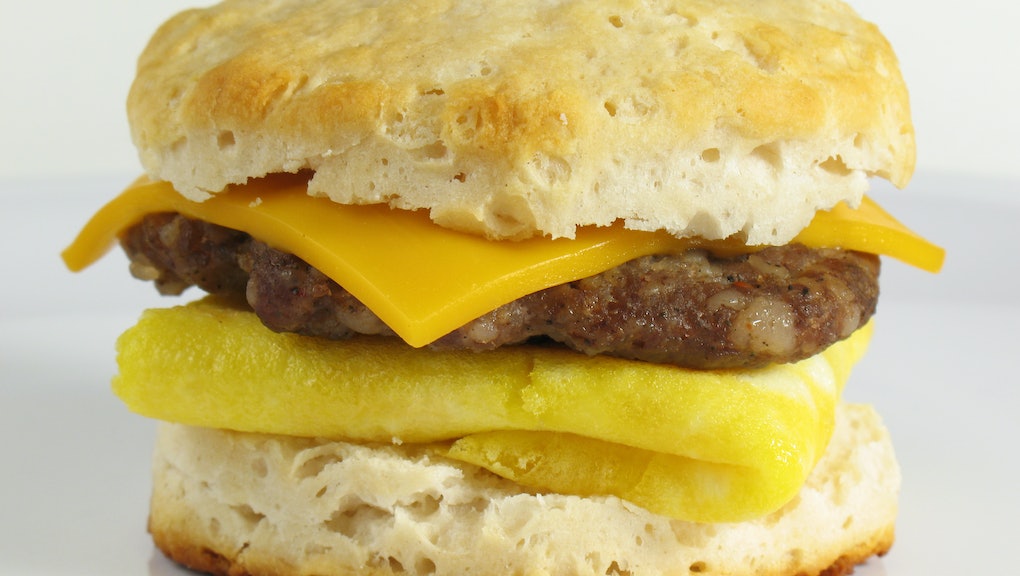 There’s more than just eggs in your fast-food breakfast sandwich, and Panera wants to change that

An egg — just a plain old egg — is the key ingredient in an egg sandwich, yes? While that might be the case in your home kitchen, the simplicity of the dish changes when fast food restaurants serve it. The egg in Starbucks’ sausage, cheddar and egg breakfast sandwich, for example, contains more than 10 ingredients — including both natural and artificial things like modified food starch, dicalcium phosphate, sodium bicarbonate and butter flavor. But on the menu, it’s “egg.” Dunkin’ Donuts’ egg and cheese sandwich reads similarly.

This lack of transparency sparked Panera Bread to petition the Food and Drug Administration to clearly define “egg” Friday. As it stands, restaurants add ingredients to their eggs to keep their sandwiches fresher longer without disclosing this to the customer. (You have to go deep into an item’s nutrition information to find mention of the preservatives.) And there’s nothing illicit about this, since the FDA does not have an established definition or standard for eggs.

“Without [a standard definition], companies can sell and advertise items that contain multiple additives, such as butter-type flavors, gums and added color, under the generic term ‘egg,’” a press release from Panera said.

If you believe people deserve to know what’s in their food, then this war against so-called eggs may be one worth fighting. While extra ingredients are deemed safe by the FDA, some preservatives have been associated with health hazards, including increased risk for certain cancers, high blood pressure and headaches.

It’s also a chance to get sandwiches with runny yolks — if that’s your thing— to become an industry standard.

Today’s commercial breakfast sandwich is rarely made with runny eggs because they’re not shelf stable, take longer to prepare and require extra training for kitchen staff. But in researching the mighty egg, Panera found that using freshly prepared, cracked-shell eggs and egg whites added an average of 10 seconds to the customer’s wait time. “It’s not substantial and the guest doesn’t experience friction,” Sara Burnett, Panera’s director of wellness and food policy, said in an interview.

Panera is dedicated to the additive-free egg, and in conjunction with its petition to the FDA, the company launched a new line of breakfast sandwiches that are made-to-order and, yes, get that #yolkporn clout. “It was one of the toughest culinary challenges,” Burnett said, noting that kitchen staff were put through an extensive training program to learn the proper way to cook an egg, which. With sensitive shells and yolks that can burst at a whisper, that isn’t always the easiest feat.

“We need to respect the integrity of the ingredient,” Tom Sadler, Panera’s head chef, said in an interview, explaining the restaurant continuously refines its products and menu to be as transparent as possible. In May 2015, it was the first national restaurant company to share a list of ingredients it considered unacceptable, continuing its commitment to making food that it defines as “100% clean” — free of artificial flavors, sweeteners, preservatives and flavors.

Only time will tell if the FDA decides to make moves around the egg, but it’s worth a shot. In May, 2016 Kind, the company that produces those nut-laden snack bars, challenged the FDA to reevaluate its definition of the word “healthy,” after learning that processed foods like low-fat pudding and cereal can be branded as such, while whole foods like salmon, nuts and avocado cannot. The administration agreed to redefine its definition and is still in the process.

Whether the FDA budges or not, Panera hopes its commitment to freshly cracked, preservative-free eggs will start a conversation among its customers and its competitors. “We’ve challenged the industry to follow us and help us create conversation and change when it comes to food ingredients and additives and transparency,” Burnett said. “My hope is that this conversation is one that creates a dialogue with our peers in the industry about how to honestly and fairly name products.”