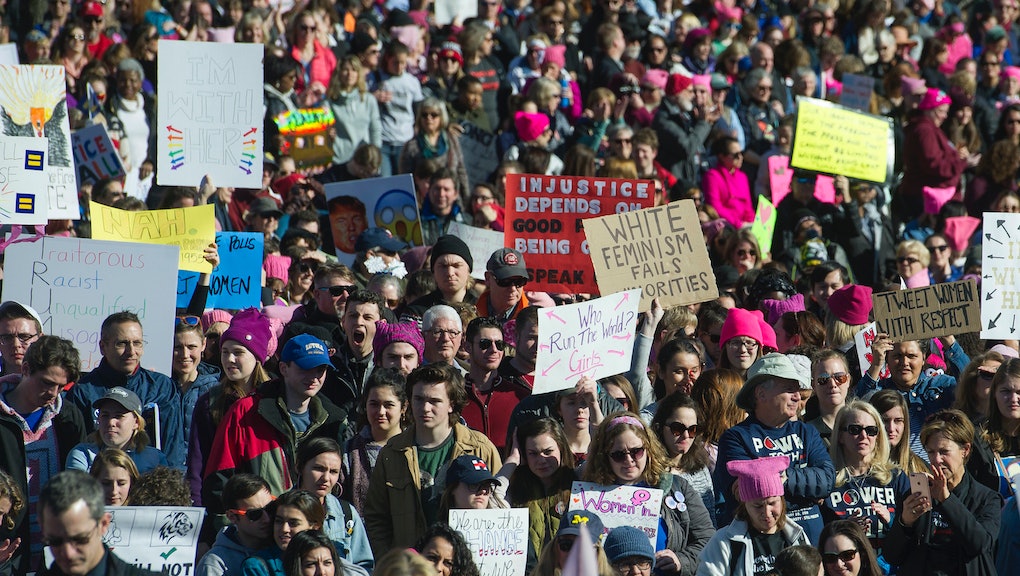 President Donald Trump appeared to mock the thousands of women who — for the second year in a row — took to the streets in large numbers on Saturday to protest him.

“Beautiful weather all over our great country, a perfect day for all Women to March,” he tweeted Saturday afternoon. “Get out there now to celebrate the historic milestones and unprecedented economic success and wealth creation that has taken place over the last 12 months.”

Trump, who marked the one-year anniversary of his inauguration Saturday, also boasted about the “lowest female unemployment in 18 years!”

Thousands across the country on Saturday participated in the second annual Women’s March, which this year focused on registering voters ahead of the upcoming midterm elections.

Large rallies were held in cities across the country, including New York City, Washington, D.C., Chicago and Los Angeles.

The Women’s March in 2017 — held the day after Trump’s inauguration — is believed to be the largest single-day protest in the history of the United States.

It set the table for a year in which women dominated the anti-Trump resistance and forced a broader reckoning in American culture over longstanding inequities with the #MeToo movement. The wave of activism also seems to have led to a record number of women putting their names on ballots for 2018.

Trump initially mocked the massive 2017 protests, but later said that “peaceful protests are a hallmark of our democracy.”

“Even if I don’t always agree, I recognize the rights of people to express their views,” he tweeted the day after the 2017 protests.

The marches Saturday were not the only events planned for the weekend; on Sunday, the anniversary of the first march, the Women’s March was set to hold a large “Power to the Polls” in Las Vegas to “channel the energy and activism of the Women’s March into tangible strategies and concrete wins in 2018,” according to organizers.

“Women’s March has created a powerful movement that has ignited thousands of activists and new leaders,” Tamika D. Mallory, co-president of the Women’s March, said in a statement. “In 2018, we must turn our work into action ahead of the midterms. This new initiative will address voter registration and voter suppression head on. We marched for justice in D.C., we created our plan in Detroit and now we’re bringing the power of the polls to Nevada.”

Sen. Kirsten Gillibrand (D-N.Y.), who spoke at the D.C. rally Saturday, said that the second year of marches showed “our grassroots energy is growing, not fading.”

“It’s clearer than ever that women are holding our democracy together in these dangerous times,” she said.